Insider Monkey has processed numerous 13F filings of hedge funds and famous investors to create an extensive database of hedge fund holdings. The 13F filings show the hedge funds and investors’ positions as of the end of the third quarter. You can find write-ups about an individual hedge fund’s trades on numerous financial news websites. However, in this article we will take a look at their collective moves and analyze what the smart money thinks of UBS Group AG (NYSE:UBS) based on that data.

Hedge funds aren’t big fans of UBS, as shares of the company were found in the portfolios of just 15 funds, which represented a decrease for the second straight quarter, though the declines have been small. Regardless, just 1.9% of the company’s shares were owned by the hedge funds tracked by Insider Monkey’s database. UBS ranked 19th on the list of Billionaire Ken Fisher’s Top Stock Picks Heading Into 2019, with his investment firm owning a $756 million position in the stock.

In the 21st century investor’s toolkit there are numerous signals stock market investors employ to grade publicly traded companies. Two of the best signals are hedge fund and insider trading signals. Our experts have shown that, historically, those who follow the best picks of the top money managers can outperform the broader indices by a significant amount (see the details here). 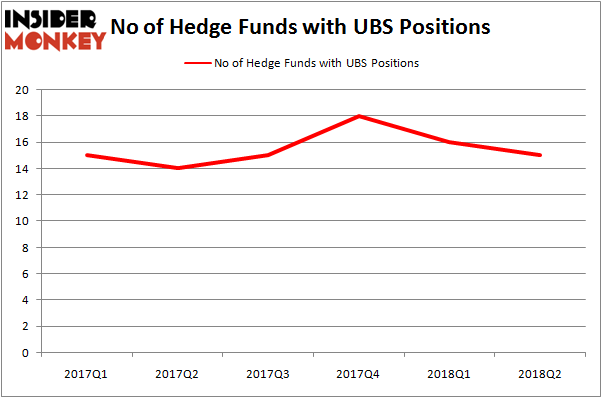 Since UBS Group AG (NYSE:UBS) has witnessed a decline in interest from the entirety of the hedge funds we track, it’s easy to see that there were a few fund managers that slashed their positions entirely heading into Q3. Intriguingly, Alec Litowitz and Ross Laser’s Magnetar Capital said goodbye to the biggest stake of the 700 funds followed by Insider Monkey, comprising an estimated $0.5 million in stock. Matthew Tewksbury’s fund, Stevens Capital Management, also dumped its stock, about $0.4 million worth.

As you can see these stocks had an average of 39 hedge funds with bullish positions and the average amount invested in these stocks was $2.55 billion. That figure was $1.07 billion in UBS’s case. Allergan, Inc. (NYSE:AGN) is the most popular stock in this table. On the other hand Banco Santander (Brasil) SA (ADR) (NYSE:BSBR) is the least popular one with only 11 bullish hedge fund positions. UBS Group AG (NYSE:UBS) is not the least popular stock in this group but hedge fund interest is still below average. This is a slightly negative signal and we’d rather spend our time researching stocks that hedge funds are piling on. In this regard AGN might be a better candidate to consider a long position.

Related Insider Monkey Articles
Hedge Funds Like What’s on the Menu at Darden Restaurants (DRI)Hedge Funds Are Powering Up Their Portfolios With This Energy StockFirst Data Corp (FDC) vs. Square (SQ): The Smart Money Has A Clear Favorite
Is Netflix, Inc. (NFLX) A Good Stock To Buy?Jim Simons and Billionaires Anticipate Healthy Returns from WellCare Health...Hedge Funds Think This Drugmaker is on the Verge of a Breakout
Monthly Newsletter Strategy
Download a free copy of our newsletter and see the details inside!
Hedge Fund Resource Center
Billionaire Hedge Funds