Is Best Buy Co., Inc. (NYSE:BBY) undervalued? The best stock pickers are in a pessimistic mood. The number of bullish hedge fund positions were trimmed by 4 recently. Our calculations also showed that BBY isn’t among the 30 most popular stocks among hedge funds. BBY was in 23 hedge funds’ portfolios at the end of the fourth quarter of 2018. There were 27 hedge funds in our database with BBY holdings at the end of the previous quarter. Overall hedge fund sentiment towards BBY is at its lowest level since at least 2015.

What does the smart money think about Best Buy Co., Inc. (NYSE:BBY)?

Heading into the first quarter of 2019, a total of 23 of the hedge funds tracked by Insider Monkey were long this stock, a change of -15% from the previous quarter. Below, you can check out the change in hedge fund sentiment towards BBY over the last 14 quarters. So, let’s examine which hedge funds were among the top holders of the stock and which hedge funds were making big moves. 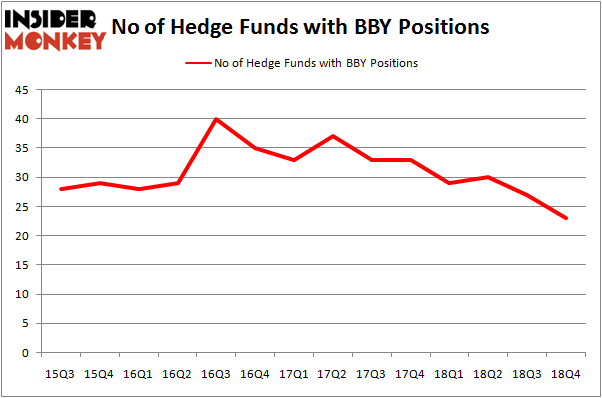 More specifically, AQR Capital Management was the largest shareholder of Best Buy Co., Inc. (NYSE:BBY), with a stake worth $288.8 million reported as of the end of September. Trailing AQR Capital Management was Renaissance Technologies, which amassed a stake valued at $74.3 million. Two Sigma Advisors, D E Shaw, and GLG Partners were also very fond of the stock, giving the stock large weights in their portfolios.

Seeing as Best Buy Co., Inc. (NYSE:BBY) has experienced falling interest from hedge fund managers, it’s easy to see that there is a sect of hedgies that decided to sell off their entire stakes last quarter. Interestingly, Paul Marshall and Ian Wace’s Marshall Wace LLP dumped the largest stake of the 700 funds tracked by Insider Monkey, totaling about $44.8 million in stock. James Parsons’s fund, Junto Capital Management, also cut its stock, about $29.5 million worth. These moves are interesting, as total hedge fund interest fell by 4 funds last quarter.

As you can see these stocks had an average of 27.75 hedge funds with bullish positions and the average amount invested in these stocks was $1037 million. That figure was $631 million in BBY’s case. Mylan N.V. (NASDAQ:MYL) is the most popular stock in this table. On the other hand Fortis Inc. (NYSE:FTS) is the least popular one with only 14 bullish hedge fund positions. Best Buy Co., Inc. (NYSE:BBY) is not the least popular stock in this group but hedge fund interest is still below average. Hedge funds have been getting out of BBY since the second quarter of 2017. These hedge funds clearly dropped the ball on BBY as the stock performed really well in 2019. Our calculations showed that top 15 most popular stocks among hedge funds returned 19.7% through March 15th and outperformed the S&P 500 ETF (SPY) by 6.6 percentage points. Only a few hedge funds were also right about betting on BBY as the stock returned 31.5% and outperformed the market as well. You can see the entire list of these shrewd hedge funds here.