Like everyone else, elite investors make mistakes. Some of their top consensus picks, such as Amazon, Facebook and Alibaba, have not done well in Q4 of 2018 due to various reasons. Nevertheless, the data show elite investors’ consensus picks have done well on average over the long-term. The top 20 stocks among hedge funds beat the S&P 500 Index ETFs by nearly 10 percentage points during the first 11 months of 2019. Because their consensus picks have done well, we pay attention to what elite funds think before doing extensive research on a stock. In this article, we take a closer look at Universal Stainless & Alloy Products (NASDAQ:USAP) from the perspective of those elite funds.

Is Universal Stainless & Alloy Products (NASDAQ:USAP) ready to rally soon? Prominent investors are becoming less hopeful. The number of bullish hedge fund positions were trimmed by 2 recently. Our calculations also showed that USAP isn’t among the 30 most popular stocks among hedge funds (click for Q3 rankings and see the video below for Q2 rankings). USAP was in 6 hedge funds’ portfolios at the end of the third quarter of 2019. There were 8 hedge funds in our database with USAP positions at the end of the previous quarter.

We leave no stone unturned when looking for the next great investment idea. For example Discover is offering this insane cashback card, so we look into shorting the stock. One of the most bullish analysts in America just put his money where his mouth is. He says, “I’m investing more today than I did back in early 2009.” So we check out his pitch. We read hedge fund investor letters and listen to stock pitches at hedge fund conferences. We even check out this option genius’ weekly trade ideas. This December, we recommended Adams Energy as a one-way bet based on an under-the-radar fund manager’s investor letter and the stock already gained 20 percent. Keeping this in mind let’s go over the key hedge fund action regarding Universal Stainless & Alloy Products (NASDAQ:USAP).

What have hedge funds been doing with Universal Stainless & Alloy Products (NASDAQ:USAP)?

Heading into the fourth quarter of 2019, a total of 6 of the hedge funds tracked by Insider Monkey were bullish on this stock, a change of -25% from the previous quarter. Below, you can check out the change in hedge fund sentiment towards USAP over the last 17 quarters. So, let’s find out which hedge funds were among the top holders of the stock and which hedge funds were making big moves. 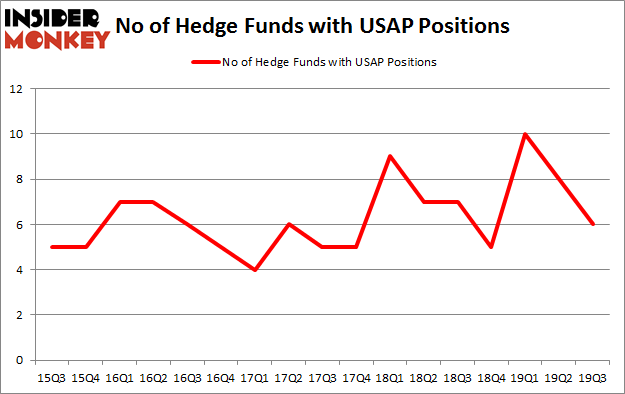 Among these funds, Royce & Associates held the most valuable stake in Universal Stainless & Alloy Products (NASDAQ:USAP), which was worth $12.6 million at the end of the third quarter. On the second spot was Minerva Advisors which amassed $6.8 million worth of shares. Forest Hill Capital, Ancora Advisors, and Fondren Management were also very fond of the stock, becoming one of the largest hedge fund holders of the company. In terms of the portfolio weights assigned to each position Minerva Advisors allocated the biggest weight to Universal Stainless & Alloy Products (NASDAQ:USAP), around 3.81% of its 13F portfolio. Forest Hill Capital is also relatively very bullish on the stock, designating 1.53 percent of its 13F equity portfolio to USAP.

Judging by the fact that Universal Stainless & Alloy Products (NASDAQ:USAP) has experienced declining sentiment from hedge fund managers, we can see that there were a few hedge funds that slashed their entire stakes in the third quarter. Interestingly, Israel Englander’s Millennium Management sold off the biggest position of all the hedgies watched by Insider Monkey, valued at about $0.6 million in stock. Renaissance Technologies, also said goodbye to its stock, about $0.4 million worth. These transactions are intriguing to say the least, as aggregate hedge fund interest fell by 2 funds in the third quarter.

As you can see these stocks had an average of 7 hedge funds with bullish positions and the average amount invested in these stocks was $16 million. That figure was $26 million in USAP’s case. Armstrong Flooring, Inc. (NYSE:AFI) is the most popular stock in this table. On the other hand First Western Financial, Inc. (NASDAQ:MYFW) is the least popular one with only 3 bullish hedge fund positions. Universal Stainless & Alloy Products (NASDAQ:USAP) is not the least popular stock in this group but hedge fund interest is still below average. This is a slightly negative signal and we’d rather spend our time researching stocks that hedge funds are piling on. Our calculations showed that top 20 most popular stocks among hedge funds returned 37.4% in 2019 through the end of November and outperformed the S&P 500 ETF (SPY) by 9.9 percentage points. Unfortunately USAP wasn’t nearly as popular as these 20 stocks (hedge fund sentiment was quite bearish); USAP investors were disappointed as the stock returned -11.2% during the first two months of the fourth quarter and underperformed the market. If you are interested in investing in large cap stocks with huge upside potential, you should check out the top 20 most popular stocks among hedge funds as 70 percent of these stocks already outperformed the market in Q4.

Is Mereo BioPharma Group plc (MREO) A Good Stock To Buy?
Monthly Newsletter Strategy
Download a free copy of our newsletter and see the details inside!
Hedge Fund Resource Center
Related News
Is Universal Stainless & Alloy Products (USAP) Going To Burn These Hedge Funds? Heavy Insider Buying at These Three Struggling Companies; Are They Ready to Rebound? AK Steel Holding Corporation (AKS): Are Hedge Funds Right About This Stock? 11 Companies That Caught Lying To The Public, Deceived Customers 10 Countries with the Highest Coffee Consumption in the World 10 Stocks That Went Up During The 2008 Crash
Billionaire Hedge Funds