Is LogMeIn Inc (NASDAQ:LOGM) a good stock to buy right now? We at Insider Monkey like to examine what billionaires and hedge funds think of a company before spending days of research on it. Given their 2 and 20 payment structure, hedge funds have more incentives and resources than the average investor. The funds have access to expert networks and get tips from industry insiders. They also have numerous Ivy League graduates and MBAs. Like everyone else, hedge funds perform miserably at times, but their consensus picks have historically outperformed the market after risk adjustments.

Hedge fund interest in LogMeIn Inc (NASDAQ:LOGM) shares was flat at the end of last quarter. This is usually a negative indicator. At the end of this article we will also compare LOGM to other stocks including Evercore Inc. (NYSE:EVR), Aerojet Rocketdyne Holdings Inc (NYSE:AJRD), and United Therapeutics Corporation (NASDAQ:UTHR) to get a better sense of its popularity. Our calculations also showed that LOGM isn’t among the 30 most popular stocks among hedge funds (view the video below).

To the average investor there are several formulas stock market investors have at their disposal to analyze publicly traded companies. Some of the less utilized formulas are hedge fund and insider trading sentiment. We have shown that, historically, those who follow the best picks of the elite money managers can outperform the broader indices by a solid margin (see the details here).

Heading into the third quarter of 2019, a total of 27 of the hedge funds tracked by Insider Monkey held long positions in this stock, a change of 0% from one quarter earlier. On the other hand, there were a total of 30 hedge funds with a bullish position in LOGM a year ago. With hedgies’ capital changing hands, there exists a few notable hedge fund managers who were boosting their stakes substantially (or already accumulated large positions). 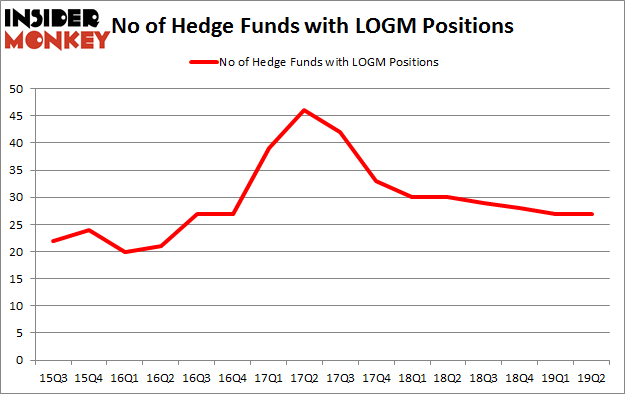 Among these funds, Alyeska Investment Group held the most valuable stake in LogMeIn Inc (NASDAQ:LOGM), which was worth $83.5 million at the end of the second quarter. On the second spot was GLG Partners which amassed $64.8 million worth of shares. Moreover, Renaissance Technologies, AQR Capital Management, and D E Shaw were also bullish on LogMeIn Inc (NASDAQ:LOGM), allocating a large percentage of their portfolios to this stock.

Since LogMeIn Inc (NASDAQ:LOGM) has experienced declining sentiment from the entirety of the hedge funds we track, it’s easy to see that there lies a certain “tier” of hedge funds that slashed their positions entirely in the second quarter. It’s worth mentioning that David Costen Haley’s HBK Investments said goodbye to the biggest position of the “upper crust” of funds watched by Insider Monkey, comprising an estimated $24 million in stock. Michael Doheny’s fund, Freshford Capital Management, also sold off its stock, about $17.6 million worth. These bearish behaviors are intriguing to say the least, as aggregate hedge fund interest stayed the same (this is a bearish signal in our experience).

As you can see these stocks had an average of 21.75 hedge funds with bullish positions and the average amount invested in these stocks was $513 million. That figure was $400 million in LOGM’s case. United Therapeutics Corporation (NASDAQ:UTHR) is the most popular stock in this table. On the other hand Envestnet Inc (NYSE:ENV) is the least popular one with only 13 bullish hedge fund positions. LogMeIn Inc (NASDAQ:LOGM) is not the most popular stock in this group but hedge fund interest is still above average. This is a slightly positive signal but we’d rather spend our time researching stocks that hedge funds are piling on. Our calculations showed that top 20 most popular stocks among hedge funds returned 24.4% in 2019 through September 30th and outperformed the S&P 500 ETF (SPY) by 4 percentage points. Unfortunately LOGM wasn’t nearly as popular as these 20 stocks and hedge funds that were betting on LOGM were disappointed as the stock returned -3.3% during the third quarter and underperformed the market. If you are interested in investing in large cap stocks with huge upside potential, you should check out the top 20 most popular stocks among hedge funds as many of these stocks already outperformed the market so far this year.