Hedge Funds Are Warming Up To Ross Stores, Inc. (ROST)

Is Ross Stores, Inc. (NASDAQ:ROST) a good bet right now? We like to analyze hedge fund sentiment before conducting days of in-depth research. We do so because hedge funds and other elite investors have numerous Ivy League graduates, expert network advisers, and supply chain tipsters working or consulting for them. There is not a shortage of news stories covering failed hedge fund investments and it is a fact that hedge funds’ picks don’t beat the market 100% of the time, but their consensus picks have historically done very well and have outperformed the market after adjusting for risk.

Is Ross Stores, Inc. (NASDAQ:ROST) a healthy stock for your portfolio? Investors who are in the know are taking a bullish view. The number of long hedge fund bets advanced by 7 in recent months. Our calculations also showed that ROST isn’t among the 30 most popular stocks among hedge funds (click for Q3 rankings and see the video below for Q2 rankings).

In the eyes of most market participants, hedge funds are seen as unimportant, old financial vehicles of yesteryear. While there are more than 8000 funds trading today, We hone in on the leaders of this group, approximately 750 funds. These hedge fund managers shepherd most of the hedge fund industry’s total capital, and by observing their inimitable investments, Insider Monkey has unsheathed a few investment strategies that have historically outstripped the broader indices. Insider Monkey’s flagship short hedge fund strategy outpaced the S&P 500 short ETFs by around 20 percentage points per annum since its inception in May 2014. Our portfolio of short stocks lost 27.8% since February 2017 (through November 21st) even though the market was up more than 39% during the same period. We just shared a list of 7 short targets in our latest quarterly update .

Unlike the largest US hedge funds that are convinced Dow will soar past 40,000 or the world’s most bearish hedge fund that’s more convinced than ever that a crash is coming, our long-short investment strategy doesn’t rely on bull or bear markets to deliver double digit returns. We only rely on the best performing hedge funds‘ buy/sell signals. We’re going to take a look at the recent hedge fund action regarding Ross Stores, Inc. (NASDAQ:ROST). 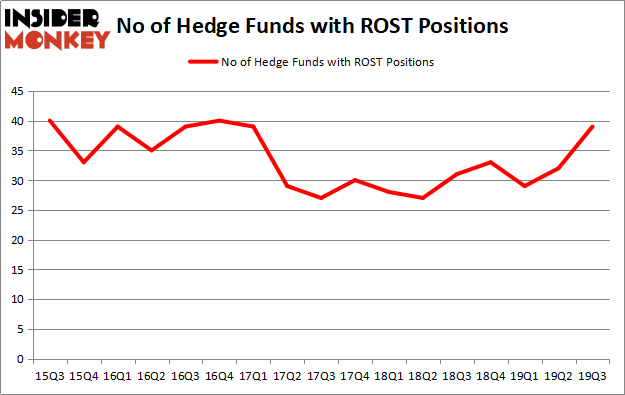 The largest stake in Ross Stores, Inc. (NASDAQ:ROST) was held by AQR Capital Management, which reported holding $227.8 million worth of stock at the end of September. It was followed by BlueSpruce Investments with a $159.2 million position. Other investors bullish on the company included D E Shaw, Renaissance Technologies, and Alyeska Investment Group. In terms of the portfolio weights assigned to each position BlueSpruce Investments allocated the biggest weight to Ross Stores, Inc. (NASDAQ:ROST), around 6.13% of its portfolio. Bristol Gate Capital Partners is also relatively very bullish on the stock, setting aside 4.7 percent of its 13F equity portfolio to ROST.

As one would reasonably expect, some big names have jumped into Ross Stores, Inc. (NASDAQ:ROST) headfirst. Junto Capital Management, managed by James Parsons, assembled the most valuable position in Ross Stores, Inc. (NASDAQ:ROST). Junto Capital Management had $48.2 million invested in the company at the end of the quarter. Alexander Mitchell’s Scopus Asset Management also made a $25.3 million investment in the stock during the quarter. The following funds were also among the new ROST investors: Paul Marshall and Ian Wace’s Marshall Wace, Sander Gerber’s Hudson Bay Capital Management, and Israel Englander’s Millennium Management.

As you can see these stocks had an average of 19 hedge funds with bullish positions and the average amount invested in these stocks was $642 million. That figure was $1067 million in ROST’s case. Constellation Brands, Inc. (NYSE:STZ) is the most popular stock in this table. On the other hand Mizuho Financial Group Inc. (NYSE:MFG) is the least popular one with only 4 bullish hedge fund positions. Ross Stores, Inc. (NASDAQ:ROST) is not the most popular stock in this group but hedge fund interest is still above average. This is a slightly positive signal but we’d rather spend our time researching stocks that hedge funds are piling on. Our calculations showed that top 20 most popular stocks among hedge funds returned 37.4% in 2019 through the end of November and outperformed the S&P 500 ETF (SPY) by 9.9 percentage points. Unfortunately ROST wasn’t nearly as popular as these 20 stocks and hedge funds that were betting on ROST were disappointed as the stock returned 5.7% during the fourth quarter (through the end of November) and underperformed the market. If you are interested in investing in large cap stocks with huge upside potential, you should check out the top 20 most popular stocks among hedge funds as many of these stocks already outperformed the market so far this year.