With the first-quarter round of 13F filings behind us it is time to take a look at the stocks in which some of the best money managers in the world preferred to invest or sell heading into the second quarter. One of these stocks was Zayo Group Holdings Inc (NYSE:ZAYO).

Is Zayo Group Holdings Inc (NYSE:ZAYO) going to take off soon? The best stock pickers are getting less bullish. The number of long hedge fund bets decreased by 2 recently. Our calculations also showed that ZAYO isn’t among the 30 most popular stocks among hedge funds (see the video below).

To the average investor there are a large number of gauges investors can use to analyze publicly traded companies. Some of the less known gauges are hedge fund and insider trading sentiment. We have shown that, historically, those who follow the top picks of the best money managers can beat the broader indices by a solid amount (see the details here). 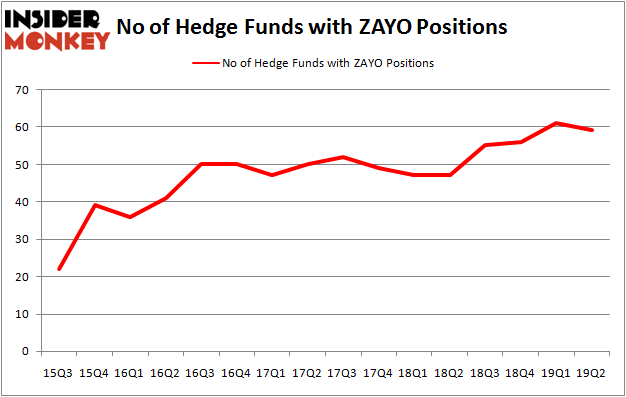 Unlike this former hedge fund manager who is convinced Dow will soar past 40000, our long-short investment strategy doesn’t rely on bull markets to deliver double digit returns. We only rely on hedge fund buy/sell signals. Let’s check out the latest hedge fund action regarding Zayo Group Holdings Inc (NYSE:ZAYO).

Heading into the third quarter of 2019, a total of 59 of the hedge funds tracked by Insider Monkey held long positions in this stock, a change of -3% from one quarter earlier. The graph below displays the number of hedge funds with bullish position in ZAYO over the last 16 quarters. So, let’s examine which hedge funds were among the top holders of the stock and which hedge funds were making big moves.

According to Insider Monkey’s hedge fund database, Matthew Halbower’s Pentwater Capital Management has the largest position in Zayo Group Holdings Inc (NYSE:ZAYO), worth close to $268.2 million, corresponding to 2.9% of its total 13F portfolio. Coming in second is Citadel Investment Group, led by Ken Griffin, holding a $260.9 million position; the fund has 0.1% of its 13F portfolio invested in the stock. Some other members of the smart money that hold long positions encompass D. E. Shaw’s D E Shaw, Carl Tiedemann and Michael Tiedemann’s TIG Advisors and Robert Emil Zoellner’s Alpine Associates.

Due to the fact that Zayo Group Holdings Inc (NYSE:ZAYO) has experienced bearish sentiment from hedge fund managers, it’s safe to say that there lies a certain “tier” of fund managers that elected to cut their entire stakes in the second quarter. It’s worth mentioning that Scott Ferguson’s Sachem Head Capital dumped the largest investment of the 750 funds monitored by Insider Monkey, valued at about $164.8 million in stock, and Doug Silverman and Alexander Klabin’s Senator Investment Group was right behind this move, as the fund sold off about $161.9 million worth. These moves are important to note, as aggregate hedge fund interest was cut by 2 funds in the second quarter.

As you can see these stocks had an average of 23.5 hedge funds with bullish positions and the average amount invested in these stocks was $683 million. That figure was $1894 million in ZAYO’s case. Alnylam Pharmaceuticals, Inc. (NASDAQ:ALNY) is the most popular stock in this table. On the other hand Aurora Cannabis Inc. (NYSE:ACB) is the least popular one with only 10 bullish hedge fund positions. Compared to these stocks Zayo Group Holdings Inc (NYSE:ZAYO) is more popular among hedge funds. Our calculations showed that top 20 most popular stocks among hedge funds returned 24.4% in 2019 through September 30th and outperformed the S&P 500 ETF (SPY) by 4 percentage points. Hedge funds were also right about betting on ZAYO, though not to the same extent, as the stock returned 3% during the third quarter and outperformed the market as well.