Is Sanderson Farms, Inc. (NASDAQ:SAFM) undervalued? The smart money is taking a pessimistic view at the margin. The number of long hedge fund positions shrunk by 1 recently. Our calculations also showed that SAFM isn’t among the 30 most popular stocks among hedge funds (see the video below). SAFM was in 20 hedge funds’ portfolios at the end of the second quarter of 2019. There were 21 hedge funds in our database with SAFM holdings at the end of the previous quarter. 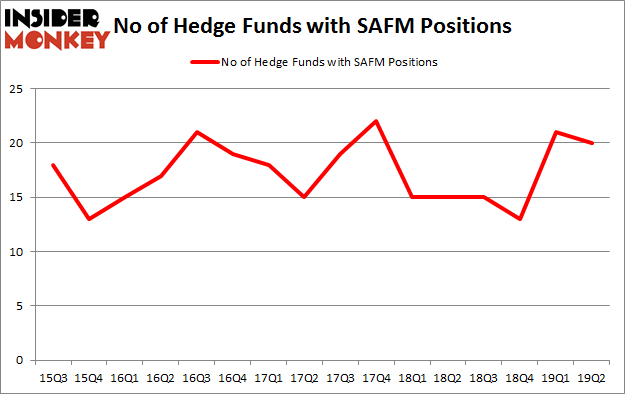 More specifically, Renaissance Technologies was the largest shareholder of Sanderson Farms, Inc. (NASDAQ:SAFM), with a stake worth $128.2 million reported as of the end of March. Trailing Renaissance Technologies was Citadel Investment Group, which amassed a stake valued at $96.8 million. D E Shaw, Highline Capital Management, and Millennium Management were also very fond of the stock, giving the stock large weights in their portfolios.

Judging by the fact that Sanderson Farms, Inc. (NASDAQ:SAFM) has faced declining sentiment from the smart money, logic holds that there was a specific group of hedge funds who sold off their entire stakes in the second quarter. At the top of the heap, Ricky Sandler’s Eminence Capital cut the biggest investment of the 750 funds monitored by Insider Monkey, worth close to $73.6 million in stock. Dmitry Balyasny’s fund, Balyasny Asset Management, also said goodbye to its stock, about $30 million worth. These moves are important to note, as aggregate hedge fund interest dropped by 1 funds in the second quarter.

As you can see these stocks had an average of 11 hedge funds with bullish positions and the average amount invested in these stocks was $102 million. That figure was $449 million in SAFM’s case. Cosan Limited (NYSE:CZZ) is the most popular stock in this table. On the other hand MorphoSys AG (NASDAQ:MOR) is the least popular one with only 6 bullish hedge fund positions. Compared to these stocks Sanderson Farms, Inc. (NASDAQ:SAFM) is more popular among hedge funds. Our calculations showed that top 20 most popular stocks among hedge funds returned 24.4% in 2019 through September 30th and outperformed the S&P 500 ETF (SPY) by 4 percentage points. Hedge funds were also right about betting on SAFM as the stock returned 11.3% during Q3 and outperformed the market by an even larger margin. Hedge funds were clearly right about piling into this stock relative to other stocks with similar market capitalizations.