The elite funds run by legendary investors such as David Tepper and Dan Loeb make hundreds of millions of dollars for themselves and their investors by spending enormous resources doing research on small cap stocks that big investment banks don’t follow. Because of their pay structures, they have strong incentives to do the research necessary to beat the market. That’s why we pay close attention to what they think in small cap stocks. In this article, we take a closer look at Masonite International Corporation (NYSE:DOOR) from the perspective of those elite funds.

Masonite International Corporation (NYSE:DOOR) shareholders have witnessed a decrease in hedge fund sentiment in recent months. Our calculations also showed that DOOR isn’t among the 30 most popular stocks among hedge funds (see the video below). However, overall hedge fund sentiment towards the stock is still very bullish in comparison to its market cap peers as we have shown below.

According to most stock holders, hedge funds are assumed to be unimportant, outdated investment vehicles of the past. While there are over 8000 funds with their doors open at the moment, Our researchers hone in on the elite of this group, around 750 funds. These money managers manage most of the smart money’s total capital, and by observing their matchless equity investments, Insider Monkey has revealed various investment strategies that have historically outstripped the S&P 500 index. Insider Monkey’s flagship hedge fund strategy outpaced the S&P 500 index by around 5 percentage points annually since its inception in May 2014. We were able to generate large returns even by identifying short candidates. Our portfolio of short stocks lost 25.7% since February 2017 (through September 30th) even though the market was up more than 33% during the same period. We just shared a list of 10 short targets in our latest quarterly update .

Unlike former hedge manager, Dr. Steve Sjuggerud, who is convinced Dow will soar past 40000, our long-short investment strategy doesn’t rely on bull markets to deliver double digit returns. We only rely on hedge fund buy/sell signals. We’re going to take a look at the fresh hedge fund action regarding Masonite International Corporation (NYSE:DOOR).

What have hedge funds been doing with Masonite International Corporation (NYSE:DOOR)? 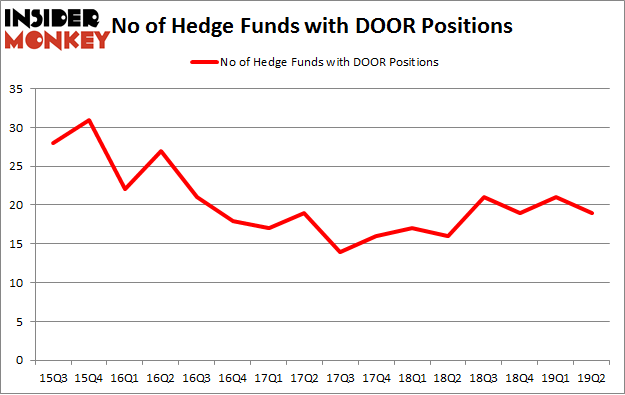 Because Masonite International Corporation (NYSE:DOOR) has experienced declining sentiment from the entirety of the hedge funds we track, logic holds that there is a sect of hedgies who sold off their full holdings in the second quarter. At the top of the heap, Peter Muller’s PDT Partners sold off the biggest investment of the “upper crust” of funds monitored by Insider Monkey, comprising close to $0.4 million in stock. David Costen Haley’s fund, HBK Investments, also sold off its stock, about $0.3 million worth. These transactions are important to note, as total hedge fund interest was cut by 2 funds in the second quarter.

As you can see these stocks had an average of 10 hedge funds with bullish positions and the average amount invested in these stocks was $87 million. That figure was $281 million in DOOR’s case. Aimmune Therapeutics Inc (NASDAQ:AIMT) is the most popular stock in this table. On the other hand Noble Midstream Partners LP (NYSE:NBLX) is the least popular one with only 4 bullish hedge fund positions. Compared to these stocks Masonite International Corporation (NYSE:DOOR) is more popular among hedge funds. Our calculations showed that top 20 most popular stocks among hedge funds returned 24.4% in 2019 through September 30th and outperformed the S&P 500 ETF (SPY) by 4 percentage points. Hedge funds were also right about betting on DOOR as the stock returned 10.1% during Q3 and outperformed the market by an even larger margin. Hedge funds were clearly right about piling into this stock relative to other stocks with similar market capitalizations.