Hedge funds and large money managers usually invest with a focus on the long-term horizon and, therefore, short-lived dips or bumps on the charts, usually don’t make them change their opinion towards a company. This time it may be different. During the fourth quarter of 2018 we observed increased volatility and small-cap stocks underperformed the market. Things completely reversed during the first half of 2019. Hedge fund investor letters indicated that they are cutting their overall exposure, closing out some position and doubling down on others. Let’s take a look at the hedge fund sentiment towards US Foods Holding Corp. (NYSE:USFD) to find out whether it was one of their high conviction long-term ideas.

US Foods Holding Corp. (NYSE:USFD) investors should pay attention to a decrease in support from the world’s most elite money managers recently. USFD was in 39 hedge funds’ portfolios at the end of the second quarter of 2019. There were 40 hedge funds in our database with USFD positions at the end of the previous quarter. Our calculations also showed that USFD isn’t among the 30 most popular stocks among hedge funds (see the video below). 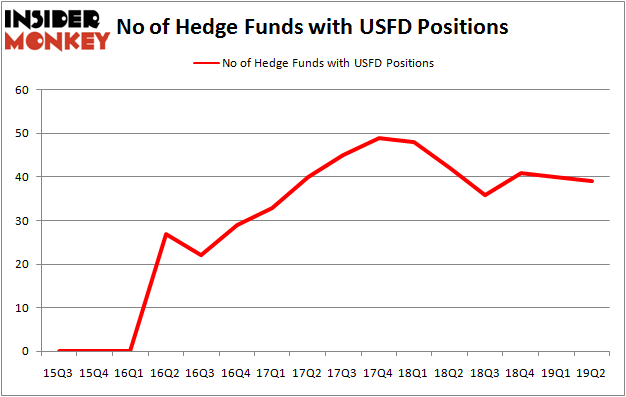 What have hedge funds been doing with US Foods Holding Corp. (NYSE:USFD)?

Among these funds, Eminence Capital held the most valuable stake in US Foods Holding Corp. (NYSE:USFD), which was worth $242.2 million at the end of the second quarter. On the second spot was Sachem Head Capital which amassed $163.6 million worth of shares. Moreover, Holocene Advisors, Palestra Capital Management, and Samlyn Capital were also bullish on US Foods Holding Corp. (NYSE:USFD), allocating a large percentage of their portfolios to this stock.

Because US Foods Holding Corp. (NYSE:USFD) has experienced a decline in interest from the smart money, it’s safe to say that there lies a certain “tier” of hedge funds that elected to cut their full holdings in the second quarter. It’s worth mentioning that Andrew Immerman and Jeremy Schiffman’s Palestra Capital Management cut the largest stake of all the hedgies monitored by Insider Monkey, worth about $91.5 million in stock. Brian J. Higgins’s fund, King Street Capital, also dumped its stock, about $42 million worth. These moves are intriguing to say the least, as aggregate hedge fund interest dropped by 1 funds in the second quarter.

As you can see these stocks had an average of 26.25 hedge funds with bullish positions and the average amount invested in these stocks was $517 million. That figure was $1399 million in USFD’s case. Fortune Brands Home & Security Inc (NYSE:FBHS) is the most popular stock in this table. On the other hand News Corp (NASDAQ:NWSA) is the least popular one with only 23 bullish hedge fund positions. Compared to these stocks US Foods Holding Corp. (NYSE:USFD) is more popular among hedge funds. Our calculations showed that top 20 most popular stocks among hedge funds returned 24.4% in 2019 through September 30th and outperformed the S&P 500 ETF (SPY) by 4 percentage points. Hedge funds were also right about betting on USFD as the stock returned 14.9% during Q3 and outperformed the market by an even larger margin. Hedge funds were clearly right about piling into this stock relative to other stocks with similar market capitalizations.