We can judge whether Rite Aid Corporation (NYSE:RAD) is a good investment right now by following the lead of some of the best investors in the world and piggybacking their ideas. There’s no better way to get these firms’ immense resources and analytical capabilities working for us than to follow their lead into their best ideas. While not all of these picks will be winners, our research shows that these picks historically outperformed the market when we factor in known risk factors.

Is Rite Aid Corporation (NYSE:RAD) a splendid stock to buy now? Prominent investors are becoming less hopeful. The number of long hedge fund bets dropped by 1 recently. Our calculations also showed that RAD isn’t among the 30 most popular stocks among hedge funds (click for Q3 rankings and see the video below for Q2 rankings). RAD was in 8 hedge funds’ portfolios at the end of the third quarter of 2019. There were 9 hedge funds in our database with RAD holdings at the end of the previous quarter.

We leave no stone unturned when looking for the next great investment idea. For example Europe is set to become the world’s largest cannabis market, so we check out this European marijuana stock pitch. One of the most bullish analysts in America just put his money where his mouth is. He says, “I’m investing more today than I did back in early 2009.” So we check out his pitch. We read hedge fund investor letters and listen to stock pitches at hedge fund conferences. We also rely on the best performing hedge funds‘ buy/sell signals. We’re going to take a gander at the new hedge fund action regarding Rite Aid Corporation (NYSE:RAD).

What have hedge funds been doing with Rite Aid Corporation (NYSE:RAD)?

At Q3’s end, a total of 8 of the hedge funds tracked by Insider Monkey were bullish on this stock, a change of -11% from one quarter earlier. By comparison, 18 hedge funds held shares or bullish call options in RAD a year ago. With the smart money’s sentiment swirling, there exists an “upper tier” of key hedge fund managers who were boosting their holdings significantly (or already accumulated large positions). 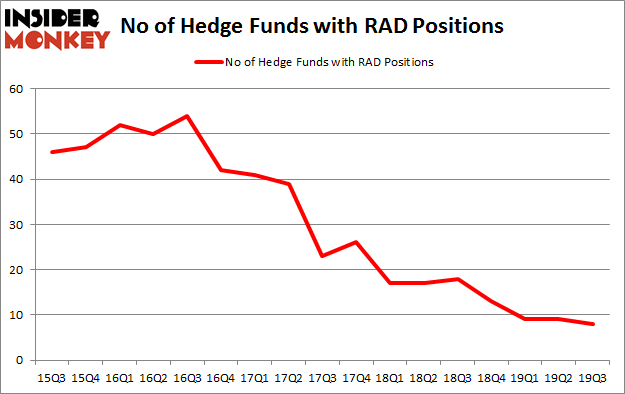 Due to the fact that Rite Aid Corporation (NYSE:RAD) has witnessed falling interest from the entirety of the hedge funds we track, it’s easy to see that there lies a certain “tier” of fund managers that slashed their full holdings last quarter. Interestingly, Bruce J. Richards and Louis Hanover’s Marathon Asset Management sold off the biggest stake of the 750 funds tracked by Insider Monkey, comprising close to $4.1 million in stock. Dmitry Balyasny’s fund, Balyasny Asset Management, also dropped its stock, about $0.8 million worth. These transactions are interesting, as total hedge fund interest dropped by 1 funds last quarter.

As you can see these stocks had an average of 6.25 hedge funds with bullish positions and the average amount invested in these stocks was $32 million. That figure was $9 million in RAD’s case. Southern National Banc. of Virginia, Inc (NASDAQ:SONA) is the most popular stock in this table. On the other hand CONSOL Coal Resources LP (NYSE:CCR) is the least popular one with only 4 bullish hedge fund positions. Rite Aid Corporation (NYSE:RAD) is not the most popular stock in this group but hedge fund interest is still above average. Our calculations showed that top 20 most popular stocks among hedge funds returned 37.4% in 2019 through the end of November and outperformed the S&P 500 ETF (SPY) by 9.9 percentage points. Hedge funds were also right about betting on RAD as the stock returned 30.4% during the fourth quarter (through the end of November) and outperformed the market. Hedge funds were rewarded for their relative bullishness.

Is Canon Inc. (CAJ) A Good Stock To Buy?
Monthly Newsletter Strategy
Download a free copy of our newsletter and see the details inside!
Hedge Fund Resource Center
Related News
Did Hedge Funds Drop The Ball On Rite Aid Corporation (RAD) ? Is Rite Aid Corporation (RAD) Going to Burn These Hedge Funds? Wondering What’s Happening in the Financial Markets Today? Take a Look at These 34 Stories! 32 Major Stories Summarizing What’s Happening in the World of Finance Today This Is What You Should Know About The Financial Markets Today What Is Going On In The Financial Markets Today? Why Rite Aid Corporation (NYSE:RAD) Shares Are Surging 10 Countries with the Highest Coffee Consumption in the World 10 Stocks That Went Up During The 2008 Crash 10 Movies About Amnesia on Netflix
Billionaire Hedge Funds