“Since 2006, value stocks (IVE vs IVW) have underperformed 11 of the 13 calendar years and when they beat growth, it wasn’t by much. Cumulatively, through this week, it has been a 122% differential (up 52% for value vs up 174% for growth). This appears to be the longest and most severe drought for value investors since data collection began. It will go our way eventually as there are too many people paying far too much for today’s darlings, both public and private. Further, the ten-year yield of 2.5% (pre-tax) isn’t attractive nor is real estate. We believe the value part of the global equity market is the only place to earn solid risk adjusted returns and we believe those returns will be higher than normal,” said Vilas Fund in its Q1 investor letter. We aren’t sure whether value stocks outperform growth, but we follow hedge fund investor letters to understand where the markets and stocks might be going. That’s why we believe it would be worthwhile to take a look at the hedge fund sentiment on Renasant Corporation (NASDAQ:RNST) in order to identify whether reputable and successful top money managers continue to believe in its potential.

Renasant Corporation (NASDAQ:RNST) was in 11 hedge funds’ portfolios at the end of June. RNST investors should pay attention to a decrease in support from the world’s most elite money managers of late. There were 16 hedge funds in our database with RNST positions at the end of the previous quarter. Our calculations also showed that RNST isn’t among the 30 most popular stocks among hedge funds (view the video below).

In the 21st century investor’s toolkit there are many formulas stock traders have at their disposal to value stocks. Two of the best formulas are hedge fund and insider trading interest. Our experts have shown that, historically, those who follow the best picks of the top money managers can outperform the S&P 500 by a healthy amount (see the details here).

Unlike former hedge manager, Dr. Steve Sjuggerud, who is convinced Dow will soar past 40000, our long-short investment strategy doesn’t rely on bull markets to deliver double digit returns. We only rely on hedge fund buy/sell signals. We’re going to take a gander at the fresh hedge fund action regarding Renasant Corporation (NASDAQ:RNST).

At Q2’s end, a total of 11 of the hedge funds tracked by Insider Monkey were long this stock, a change of -31% from the previous quarter. The graph below displays the number of hedge funds with bullish position in RNST over the last 16 quarters. With the smart money’s sentiment swirling, there exists a select group of notable hedge fund managers who were upping their holdings significantly (or already accumulated large positions). 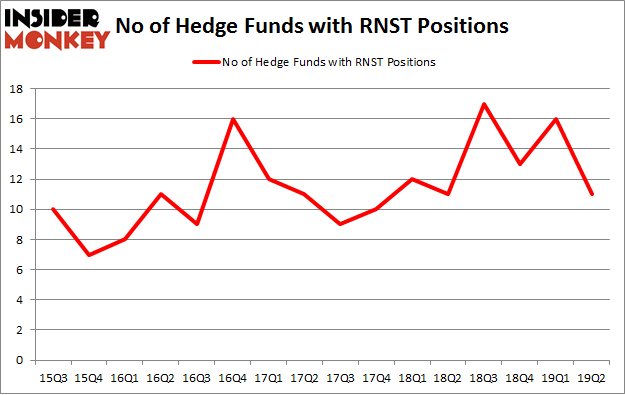 The largest stake in Renasant Corporation (NASDAQ:RNST) was held by Renaissance Technologies, which reported holding $19.4 million worth of stock at the end of March. It was followed by GLG Partners with a $4.5 million position. Other investors bullish on the company included Citadel Investment Group, Royce & Associates, and AlphaOne Capital Partners.

Since Renasant Corporation (NASDAQ:RNST) has experienced a decline in interest from hedge fund managers, it’s safe to say that there were a few money managers who sold off their positions entirely by the end of the second quarter. It’s worth mentioning that Paul Marshall and Ian Wace’s Marshall Wace LLP sold off the biggest position of the “upper crust” of funds tracked by Insider Monkey, valued at close to $0.9 million in stock, and Roger Ibbotson’s Zebra Capital Management was right behind this move, as the fund cut about $0.7 million worth. These moves are intriguing to say the least, as aggregate hedge fund interest dropped by 5 funds by the end of the second quarter.

Let’s go over hedge fund activity in other stocks – not necessarily in the same industry as Renasant Corporation (NASDAQ:RNST) but similarly valued. We will take a look at Zogenix, Inc. (NASDAQ:ZGNX), Amneal Pharmaceuticals, Inc. (NYSE:AMRX), Invesco Mortgage Capital Inc (NYSE:IVR), and InterDigital, Inc. (NASDAQ:IDCC). All of these stocks’ market caps are similar to RNST’s market cap.

As you can see these stocks had an average of 16.25 hedge funds with bullish positions and the average amount invested in these stocks was $344 million. That figure was $31 million in RNST’s case. Zogenix, Inc. (NASDAQ:ZGNX) is the most popular stock in this table. On the other hand Amneal Pharmaceuticals, Inc. (NYSE:AMRX) is the least popular one with only 10 bullish hedge fund positions. Renasant Corporation (NASDAQ:RNST) is not the least popular stock in this group but hedge fund interest is still below average. This is a slightly negative signal and we’d rather spend our time researching stocks that hedge funds are piling on. Our calculations showed that top 20 most popular stocks among hedge funds returned 24.4% in 2019 through September 30th and outperformed the S&P 500 ETF (SPY) by 4 percentage points. Unfortunately RNST wasn’t nearly as popular as these 20 stocks (hedge fund sentiment was quite bearish); RNST investors were disappointed as the stock returned -2% during the third quarter and underperformed the market. If you are interested in investing in large cap stocks with huge upside potential, you should check out the top 20 most popular stocks among hedge funds as many of these stocks already outperformed the market so far in 2019.