As we already know from media reports and hedge fund investor letters, many hedge funds lost money in fourth quarter, blaming macroeconomic conditions and unpredictable events that hit several sectors, with technology among them. Nevertheless, most investors decided to stick to their bullish theses and their long-term focus allows us to profit from the recent declines. In particular, let’s take a look at what hedge funds think about Harley-Davidson, Inc. (NYSE:HOG) in this article.

Is Harley-Davidson, Inc. (NYSE:HOG) a buy here? The smart money is in a bearish mood. The number of bullish hedge fund positions retreated by 1 recently. Our calculations also showed that HOG isn’t among the 30 most popular stocks among hedge funds.

Heading into the first quarter of 2019, a total of 19 of the hedge funds tracked by Insider Monkey were long this stock, a change of -5% from one quarter earlier. By comparison, 12 hedge funds held shares or bullish call options in HOG a year ago. With hedge funds’ positions undergoing their usual ebb and flow, there exists an “upper tier” of noteworthy hedge fund managers who were adding to their stakes meaningfully (or already accumulated large positions). 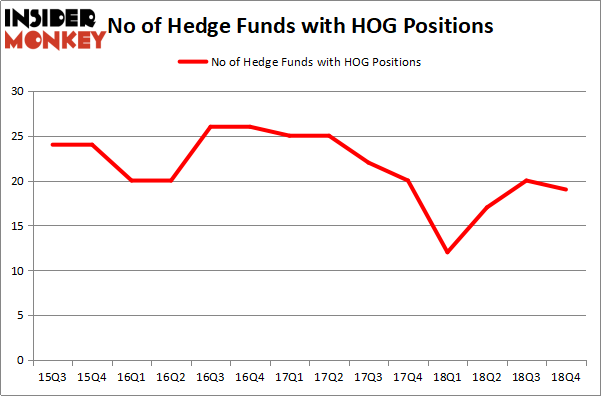 Among these funds, Gotham Asset Management held the most valuable stake in Harley-Davidson, Inc. (NYSE:HOG), which was worth $12.4 million at the end of the third quarter. On the second spot was Impala Asset Management which amassed $11.7 million worth of shares. Moreover, Citadel Investment Group, Adage Capital Management, and Laurion Capital Management were also bullish on Harley-Davidson, Inc. (NYSE:HOG), allocating a large percentage of their portfolios to this stock.

Because Harley-Davidson, Inc. (NYSE:HOG) has faced falling interest from the entirety of the hedge funds we track, it’s easy to see that there were a few money managers that slashed their positions entirely last quarter. It’s worth mentioning that Steven Boyd’s Armistice Capital cut the biggest investment of the “upper crust” of funds monitored by Insider Monkey, worth about $37.3 million in stock, and Israel Englander’s Millennium Management was right behind this move, as the fund said goodbye to about $31.8 million worth. These moves are intriguing to say the least, as aggregate hedge fund interest dropped by 1 funds last quarter.

Let’s now take a look at hedge fund activity in other stocks – not necessarily in the same industry as Harley-Davidson, Inc. (NYSE:HOG) but similarly valued. We will take a look at Assurant, Inc. (NYSE:AIZ), Donaldson Company, Inc. (NYSE:DCI), Companhia Brasileira de Distrib. (NYSE:CBD), and EnCana Corporation (NYSE:ECA). All of these stocks’ market caps are similar to HOG’s market cap.

As you can see these stocks had an average of 25.75 hedge funds with bullish positions and the average amount invested in these stocks was $354 million. That figure was $68 million in HOG’s case. EnCana Corporation (NYSE:ECA) is the most popular stock in this table. On the other hand Companhia Brasileira de Distrib. (NYSE:CBD) is the least popular one with only 13 bullish hedge fund positions. Harley-Davidson, Inc. (NYSE:HOG) is not the least popular stock in this group but hedge fund interest is still below average. Our calculations showed that the top 15 most popular stocks among hedge funds returned 21.3% year-to-date through April 8th and outperformed the S&P 500 ETF (SPY) by more than 5 percentage points. Hedge funds were also right about betting on HOG, though not to the same extent, as the stock returned 19.3% and outperformed the market as well.