The Dearborn, Michigan-based company released its third-quarter report on Oct. 24 and the general consensus is that the company is on the right track. Ford’s overseas projects are doing considerably well, while the company tries to rejuvenate its domestic operational performance.

In the Chinese market, the company reduced losses by $105 million quarter-over-quarter. Ford named auto industry veteran Anning Chen as the new president and CEO of the China unit, starting Nov. 1, while also announcing new offerings, in order to address declining sales in the country. CFO Bob Shanks believes the measures will be instrumental in ensuring the company will address the underlying issues holding its Chinese operations back.

Meanwhile, Ford Middle East and Africa posted a third-quarter profit of $47 million, up $103 million from a $56 million loss in the third quarter of 2017. Considering there are 1.3 billion consumers in the region, it’s a big market for Ford going forward.

Ford plans to continue paying a $0.15 quarterly dividend “through the cycle,” meaning the next downturn. Although analysts voiced their concerns, Ford said it will maintain the policy using its cash reserves, thanks in part to the profits generated from Ford Credit.

At Q3’s end, a total of 30 of the hedge funds tracked by Insider Monkey were long this stock, a change of -6% from the second quarter of 2018. Below, you can check out the change in hedge fund sentiment towards F over the last 13 quarters. With hedge funds’ sentiment swirling, there exists a select group of notable hedge fund managers who were adding to their stakes meaningfully (or already accumulated large positions). 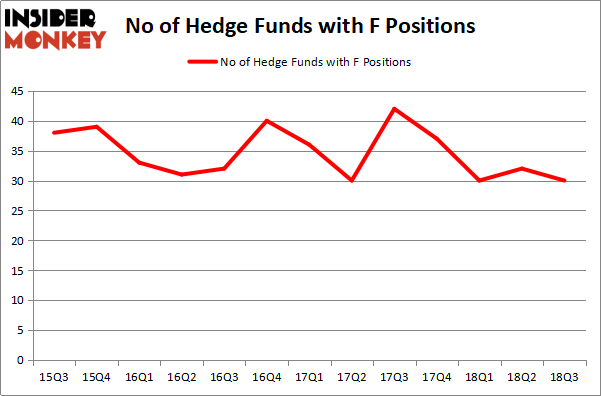 Of the funds tracked by Insider Monkey, Pzena Investment Management, managed by Richard S. Pzena, holds the largest position in Ford Motor Company (NYSE:F). Pzena Investment Management has a $377.4 million position in the stock, comprising 1.8% of its 13F portfolio. The second largest stake is held by Greenhaven Associates, led by Edgar Wachenheim, holding a $305.6 million position; 4.7% of its 13F portfolio is allocated to the stock. Some other peers that are bullish consist of Panayotis Takis Sparaggis’s Alkeon Capital Management, Ken Griffin’s Citadel Investment Group and Phill Gross and Robert Atchinson’s Adage Capital Management.

Because Ford Motor Company (NYSE:F) has witnessed bearish sentiment from hedge fund managers, logic holds that there were a few hedge funds who sold off their entire stakes heading into Q3. At the top of the heap, Mike Masters’s Masters Capital Management said goodbye to the biggest investment of all the hedgies monitored by Insider Monkey, comprising close to $21.1 million in stock. Matthew Tewksbury’s fund, Stevens Capital Management, also sold off its stock, about $13.7 million worth. These moves are important to note, as total hedge fund interest fell by 2 funds heading into Q3.

As you can see these stocks had an average of 41 hedge funds with bullish positions and the average amount invested in these stocks was $1690 million. That figure was $992 million in F’s case. Electronic Arts Inc. (NASDAQ:EA) is the most popular stock in this table. On the other hand TransCanada Corporation (NYSE:TRP) is the least popular one with only 14 bullish hedge fund positions. Ford Motor Company (NYSE:F) is not the least popular stock in this group but hedge fund interest is still below average. This is a slightly negative signal and we’d rather spend our time researching stocks that hedge funds are piling on. In this regard EA might be a better candidate to consider a long position.