Is Devon Energy Corp (NYSE:DVN) a good equity to bet on right now? We like to check what the smart money thinks first before doing extensive research on a given stock. Although there have been several high profile failed hedge fund picks, the consensus picks among hedge fund investors have historically outperformed the market after adjusting for known risk attributes. It’s not surprising given that hedge funds have access to better information and more resources to predict the winners in the stock market.

Devon Energy Corp (NYSE:DVN) investors should pay attention to a decrease in support from the world’s most elite money managers in recent months. Our calculations also showed that DVN isn’t among the 30 most popular stocks among hedge funds (view the video below).

Unlike some fund managers who are betting on Dow reaching 40000 in a year, our long-short investment strategy doesn’t rely on bull markets to deliver double digit returns. We only rely on hedge fund buy/sell signals. We’re going to check out the latest hedge fund action regarding Devon Energy Corp (NYSE:DVN).

Heading into the third quarter of 2019, a total of 36 of the hedge funds tracked by Insider Monkey held long positions in this stock, a change of -10% from one quarter earlier. The graph below displays the number of hedge funds with bullish position in DVN over the last 16 quarters. So, let’s examine which hedge funds were among the top holders of the stock and which hedge funds were making big moves. 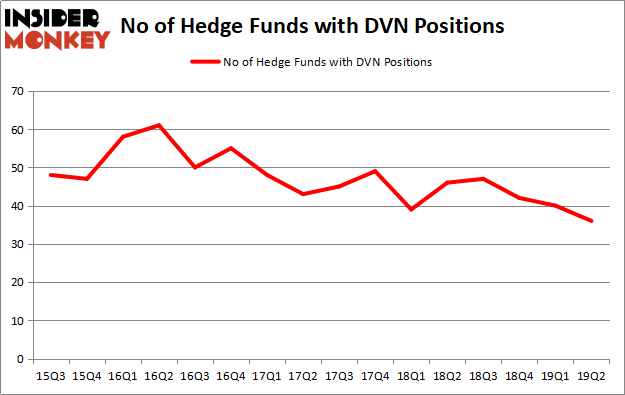 When looking at the institutional investors followed by Insider Monkey, Elliott Management, managed by Paul Singer, holds the biggest position in Devon Energy Corp (NYSE:DVN). Elliott Management has a $499.8 million position in the stock, comprising 3.3% of its 13F portfolio. Coming in second is Citadel Investment Group, led by Ken Griffin, holding a $224.5 million position; the fund has 0.1% of its 13F portfolio invested in the stock. Some other professional money managers with similar optimism encompass Ric Dillon’s Diamond Hill Capital, Noam Gottesman’s GLG Partners and Dmitry Balyasny’s Balyasny Asset Management.

Since Devon Energy Corp (NYSE:DVN) has witnessed bearish sentiment from hedge fund managers, it’s safe to say that there lies a certain “tier” of funds that decided to sell off their positions entirely by the end of the second quarter. Interestingly, Paul Singer’s Elliott Management sold off the largest investment of the 750 funds followed by Insider Monkey, valued at about $94.7 million in stock, and David Costen Haley’s HBK Investments was right behind this move, as the fund sold off about $32 million worth. These transactions are important to note, as aggregate hedge fund interest fell by 4 funds by the end of the second quarter.

As you can see these stocks had an average of 17 hedge funds with bullish positions and the average amount invested in these stocks was $521 million. That figure was $1412 million in DVN’s case. Zebra Technologies Corporation (NASDAQ:ZBRA) is the most popular stock in this table. On the other hand Regency Centers Corp (NYSE:REG) is the least popular one with only 12 bullish hedge fund positions. Compared to these stocks Devon Energy Corp (NYSE:DVN) is more popular among hedge funds. Our calculations showed that top 20 most popular stocks among hedge funds returned 24.4% in 2019 through September 30th and outperformed the S&P 500 ETF (SPY) by 4 percentage points. Unfortunately DVN wasn’t nearly as popular as these 20 stocks and hedge funds that were betting on DVN were disappointed as the stock returned -15.3% during the third quarter and underperformed the market. If you are interested in investing in large cap stocks with huge upside potential, you should check out the top 20 most popular stocks among hedge funds as many of these stocks already outperformed the market in Q3.