How do we determine whether Canadian Imperial Bank of Commerce (NYSE:CM) makes for a good investment at the moment? We analyze the sentiment of a select group of the very best investors in the world, who spend immense amounts of time and resources studying companies. They may not always be right (no one is), but data shows that their consensus long positions have historically outperformed the market when we adjust for known risk factors.

Is Canadian Imperial Bank of Commerce (NYSE:CM) the right investment to pursue these days? Money managers are reducing their bets on the stock. The number of long hedge fund bets decreased by 3 lately. Our calculations also showed that CM isn’t among the 30 most popular stocks among hedge funds. CM was in 12 hedge funds’ portfolios at the end of June. There were 15 hedge funds in our database with CM positions at the end of the previous quarter.

Unlike some fund managers who are betting on Dow reaching 40000 in a year, our long-short investment strategy doesn’t rely on bull markets to deliver double digit returns. We only rely on hedge fund buy/sell signals. Let’s take a glance at the key hedge fund action regarding Canadian Imperial Bank of Commerce (NYSE:CM).

What does smart money think about Canadian Imperial Bank of Commerce (NYSE:CM)? 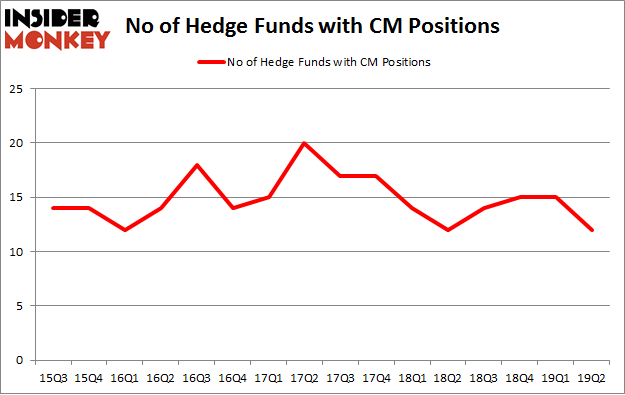 More specifically, Renaissance Technologies was the largest shareholder of Canadian Imperial Bank of Commerce (NYSE:CM), with a stake worth $94.1 million reported as of the end of March. Trailing Renaissance Technologies was GLG Partners, which amassed a stake valued at $23.2 million. Citadel Investment Group, D E Shaw, and Two Sigma Advisors were also very fond of the stock, giving the stock large weights in their portfolios.

Seeing as Canadian Imperial Bank of Commerce (NYSE:CM) has experienced declining sentiment from the aggregate hedge fund industry, it’s safe to say that there were a few funds who were dropping their entire stakes in the second quarter. Intriguingly, Cliff Asness’s AQR Capital Management dropped the biggest stake of all the hedgies followed by Insider Monkey, comprising about $142.1 million in stock, and Michael Platt and William Reeves’s BlueCrest Capital Mgmt. was right behind this move, as the fund dropped about $1.5 million worth. These transactions are interesting, as aggregate hedge fund interest was cut by 3 funds in the second quarter.

As you can see these stocks had an average of 46 hedge funds with bullish positions and the average amount invested in these stocks was $3105 million. That figure was $211 million in CM’s case. Humana Inc (NYSE:HUM) is the most popular stock in this table. On the other hand Regeneron Pharmaceuticals Inc (NASDAQ:REGN) is the least popular one with only 37 bullish hedge fund positions. Compared to these stocks Canadian Imperial Bank of Commerce (NYSE:CM) is even less popular than REGN. Hedge funds clearly dropped the ball on CM as the stock delivered strong returns, though hedge funds’ consensus picks still generated respectable returns. Our calculations showed that top 20 most popular stocks (see the video below) among hedge funds returned 24.4% in 2019 through September 30th and outperformed the S&P 500 ETF (SPY) by 4 percentage points. A small number of hedge funds were also right about betting on CM as the stock returned 6.5% during the third quarter and outperformed the market by an even larger margin.