Is Mr. Cooper Group Inc. (NASDAQ:COOP) a sound investment now? Hedge funds are becoming less confident. The number of bullish hedge fund positions fell by 4 in recent months. Our calculations also showed that COOP isn’t among the 30 most popular stocks among hedge funds (see the video below). COOP was in 23 hedge funds’ portfolios at the end of the second quarter of 2019. There were 27 hedge funds in our database with COOP holdings at the end of the previous quarter.

In the eyes of most market participants, hedge funds are perceived as worthless, outdated financial tools of years past. While there are greater than 8000 funds in operation today, Our experts look at the moguls of this club, approximately 750 funds. These investment experts manage bulk of the hedge fund industry’s total capital, and by observing their finest investments, Insider Monkey has brought to light a few investment strategies that have historically surpassed Mr. Market. Insider Monkey’s flagship hedge fund strategy defeated the S&P 500 index by around 5 percentage points annually since its inception in May 2014. We were able to generate large returns even by identifying short candidates. Our portfolio of short stocks lost 25.7% since February 2017 (through September 30th) even though the market was up more than 33% during the same period. We just shared a list of 10 short targets in our latest quarterly update . 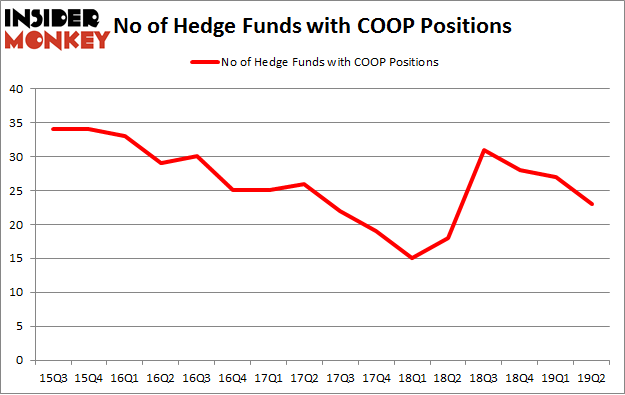 Due to the fact that Mr. Cooper Group Inc. (NASDAQ:COOP) has witnessed bearish sentiment from the aggregate hedge fund industry, it’s easy to see that there is a sect of hedge funds who were dropping their entire stakes by the end of the second quarter. It’s worth mentioning that Tony Davis’s Inherent Group dumped the largest investment of the 750 funds tracked by Insider Monkey, worth about $21.9 million in stock. Emanuel J. Friedman’s fund, EJF Capital, also dropped its stock, about $4.5 million worth. These transactions are important to note, as total hedge fund interest fell by 4 funds by the end of the second quarter.

As you can see these stocks had an average of 16.25 hedge funds with bullish positions and the average amount invested in these stocks was $84 million. That figure was $237 million in COOP’s case. William Lyon Homes (NYSE:WLH) is the most popular stock in this table. On the other hand Schnitzer Steel Industries, Inc. (NASDAQ:SCHN) is the least popular one with only 12 bullish hedge fund positions. Mr. Cooper Group Inc. (NASDAQ:COOP) is not the most popular stock in this group but hedge fund interest is still above average. Our calculations showed that top 20 most popular stocks among hedge funds returned 24.4% in 2019 through September 30th and outperformed the S&P 500 ETF (SPY) by 4 percentage points. Hedge funds were also right about betting on COOP as the stock returned 32.6% during the third quarter and outperformed the market. Hedge funds were rewarded for their relative bullishness.