Hedge Funds Are Piling Into This Stock

We at Insider Monkey have gone over 700 13F filings that hedge funds and prominent investors are required to file by the government. The 13F filings show the funds’ and investors’ portfolio positions as of June 30. In this article we look at what those investors think of AT&T Inc. (NYSE:T) and compare it against Intel Corporation (NASDAQ:INTC), The Home Depot, Inc. (NYSE:HD), Mastercard Inc (NYSE:MA), and Pfizer Inc. (NYSE:PFE).

What have hedge funds been doing with AT&T Inc. (NYSE:T)?

Heading into the fourth quarter of 2018, a total of 94 of the hedge funds tracked by Insider Monkey were bullish on this stock, a change of 141% from the previous quarter. Below, you can check out the change in hedge fund sentiment towards T over the last 6 quarters. With the smart money’s capital changing hands, there exists an “upper tier” of noteworthy hedge fund managers who were increasing their stakes significantly (or already accumulated large positions). 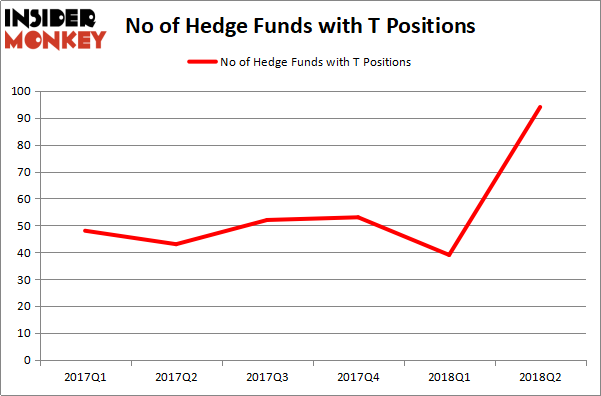 More specifically, HBK Investments was the largest shareholder of AT&T Inc. (NYSE:T), with a call option stake worth $571.7 millions reported as of the end of June. Trailing HBK Investments was Pentwater Capital Management, which amassed a stake valued at $483.6 millions. Manikay Partners, Bruce Berkowitz’s Fairholme, and Scoggin were also very fond of the stock, giving the stock large weights in their portfolios.

As you can see these stocks had an average of 62.5 hedge funds with bullish positions and the average amount invested in these stocks was $5417 million. That figure was $3043 million in T’s case. Mastercard Inc (NYSE:MA) is the most popular stock in this table. On the other hand Pfizer Inc. (NYSE:PFE) is the least popular one with only 48 bullish hedge fund positions. Compared to these stocks AT&T Inc. (NYSE:T) is more popular among hedge funds. AT&T is also among hedge funds’ top 5 dividend stock picks. Considering that hedge funds are fond of this stock in relation to its market cap peers, it may be a good idea to analyze it in detail and potentially include it in your portfolio.