It seems that the masses and most of the financial media hate hedge funds and what they do, but why is this hatred of hedge funds so prominent? At the end of the day, these asset management firms do not gamble the hard-earned money of the people who are on the edge of poverty. Truth be told, most hedge fund managers and other smaller players within this industry are very smart and skilled investors. Of course, they also make wrong bets, but no one knows what the future holds and how market participants will react to the bountiful news that floods in each day. The S&P 500 Index gained 5.2% in the 12 month-period that ended October 30, while less than 49% of its stocks beat the benchmark. In contrast, the 30 most popular S&P 500 stocks among the hedge fund investors tracked by the Insider Monkey team returned 9.5% over the same period, which provides evidence that these money managers do have great stock picking abilities. Even more to that, 63% of these stocks managed to beat the S&P 500 Index. That’s why we believe it isn’t a waste of time to check out hedge fund sentiment before you invest in a stock like Texas Instruments Incorporated (NASDAQ:TXN).

A few of the most acclaimed hedge funds sold out of Texas Instruments in Q2, lead by billionaire Ray Dalio’s Bridgewater Associates and Louis Bacon’s Moore Global Investments. Overall, 38 hedge funds owned the stock on June 30, a decline of three during the second quarter. Cliff Asness’ AQR Capital Management hiked its TXN position by 9% to 5.43 million shares. Texas Instruments appears to be caught in a downtrend in its analog chips business that could persist into early 2019. The company’s recent Q4 estimates were light, which dragged down other semiconductor and tech stocks. Director Martin S. Craighead bought 10,000 shares on October 25 at the lowest price they had fallen to in over a year, which ranked third on our list of the The 25 Biggest Insider Purchases in October.

To most traders, hedge funds are perceived as worthless, old investment tools of the past. While there are more than 8,000 funds trading today, we hone in on the moguls of this group, approximately 700 funds. These money managers control the lion’s share of the hedge fund industry’s total capital, and by following their matchless investments, Insider Monkey has formulated various investment strategies that have historically surpassed the broader indices. Insider Monkey’s small-cap hedge fund strategy surpassed the S&P 500 index by 12 percentage points a year for a decade in their back tests.

Heading into the fourth quarter of 2018, a total of 38 of the hedge funds tracked by Insider Monkey held long positions in this stock, a 7% dip from one quarter earlier. The graph below displays the number of hedge funds with bullish positions in TXN over the last 6 quarters. With hedge funds’ capital changing hands, there exists a select group of key hedge fund managers who were boosting their holdings significantly (or already accumulated large positions). 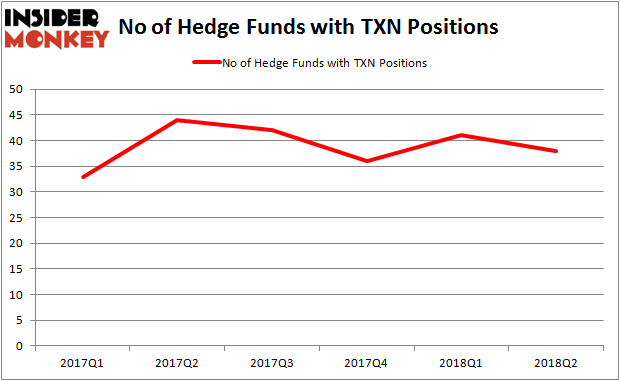 AQR Capital Management held the most valuable stake in Texas Instruments Incorporated (NASDAQ:TXN), which was worth $601.5 million at the end of the second quarter. On the second spot was Lansdowne Partners which amassed $520.3 million worth of shares. Moreover, Sensato Capital Management, Wallace R. Weitz & Co., and Markel Gayner Asset Management were also bullish on Texas Instruments Incorporated (NASDAQ:TXN), allocating a large percentage of their 13F portfolios to this stock.

Due to the fact that Texas Instruments Incorporated (NASDAQ:TXN) has experienced declining sentiment from the smart money, it’s easy to see that there exists a select few hedgies that elected to cut their full holdings last quarter. Intriguingly, Peter Rathjens, Bruce Clarke and John Campbell’s Arrowstreet Capital dropped the biggest investment of the “upper crust” of funds followed by Insider Monkey, worth about $90.8 million in stock. John Hurley’s fund, Cavalry Asset Management, also dumped its stock, about $19 million worth. These moves are intriguing to say the least, as total hedge fund interest dropped by three funds last quarter.

As you can see these stocks had an average of 39 hedge funds with bullish positions and the average amount invested in these stocks was $1.45 billion. That figure was $2.03 billion in TXN’s case. Abbott Laboratories (NYSE:ABT) is the most popular stock in this table. On the other hand Toronto-Dominion Bank (USA) (NYSE:TD) is the least popular one with only 17 bullish hedge fund positions. Texas Instruments Incorporated (NASDAQ:TXN) is not the least popular stock in this group but hedge fund interest is still below average. This is a slightly negative signal and we’d rather spend our time researching stocks that hedge funds are piling on. In this regard ABT might be a better candidate to consider a long position.

Is TXN A Good Investment Right Now? Is TXN A Good Stock To Buy? NASDAQ:TXN The 25 Biggest Insider Purchases in October Yahoo Finance