Hedge Funds Are Getting Onboard With Target Corporation (TGT)’s Rebound

Legendary investors such as Leon Cooperman and Seth Klarman earn enormous amounts of money for themselves and their investors by doing in-depth research on small-cap stocks that big brokerage houses don’t publish. Small cap stocks -especially when they are screened well- can generate substantial outperformance versus a boring index fund. That’s why we analyze the activity of those elite funds in these small-cap stocks. In the following paragraphs, we analyze Target Corporation (NYSE:TGT) from the perspective of those elite funds.

Hedge funds like what they see from Target Corporation (NYSE:TGT), as ownership of the stock ticked up for the second straight quarter. One of the 11 Largest Online Retailers in the World, Target was owned by 32 of the hedge funds in our database at the end of the second quarter, including a $374 million position owned by Cliff Asness’ AQR Capital Management. Target has paid out a dividend for over 50 consecutive years, which landed it in 2nd place on our list of the 25 Best Dividend Stocks for Retirement.

To the average investor there are tons of gauges stock traders have at their disposal to value their stock investments. Two of the most underrated gauges are hedge fund and insider trading moves. Our researchers have shown that, historically, those who follow the top picks of the elite hedge fund managers can outclass their index-focused peers by a superb margin (see the details here).

At Q3’s end, a total of 34 of the hedge funds tracked by Insider Monkey held long positions in this stock, a rise of 6% from the second quarter of 2018. On the other hand, there were a total of 36 hedge funds with a bullish position in TGT in the middle of 2017. With the smart money’s sentiment swirling, there exists a few key hedge fund managers who were increasing their stakes meaningfully (or already accumulated large positions). 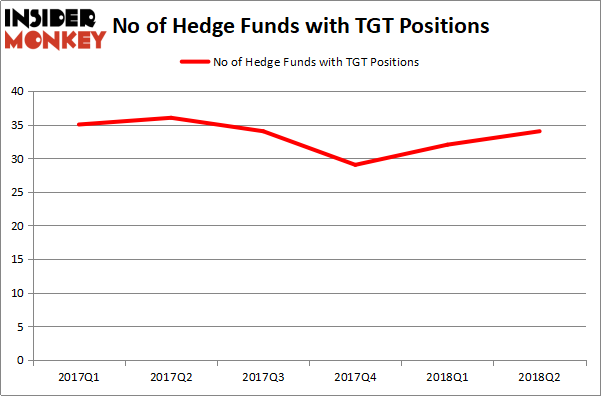 More specifically, AQR Capital Management was the largest shareholder of Target Corporation (NYSE:TGT), with a stake worth $374 million reported as of the end of June. Trailing AQR Capital Management was Two Sigma Advisors, which amassed a stake valued at $350.4 million. Tyvor Capital, Alyeska Investment Group, and Moore Global Investments were also very fond of the stock, giving the stock large weights in their portfolios.

Consequently, some big names were leading the bulls’ herd. Tyvor Capital, managed by John Tompkins, assembled a valuable position in Target Corporation (NYSE:TGT). Tyvor Capital had $46.4 million invested in the company at the end of the quarter. Anand Parekh’s Alyeska Investment Group also made a $113.3 million investment in the stock during the quarter. The following funds were also among the new TGT investors: Louis Bacon’s Moore Global Investments, Nick Niell’s Arrowgrass Capital Partners, and Alexander Mitchell’s Scopus Asset Management.

As you can see these stocks had an average of 19 hedge funds with bullish positions and the average amount invested in these stocks was $953 million. That figure was $1.32 billion in TGT’s case. Ecolab Inc. (NYSE:ECL) is the most popular stock in this table. On the other hand Williams Partners L.P. (NYSE:WPZ) is the least popular one with only 11 bullish hedge fund positions. Compared to these stocks Target Corporation (NYSE:TGT) is more popular among hedge funds. Considering that hedge funds are fond of this stock in relation to its market cap peers and given its sterling dividend history, it may be a good idea to analyze it in detail and potentially include it in your portfolio.