Although the masses and most of the financial media blame hedge funds for their exorbitant fee structure and disappointing performance, these investors have proved to have great stock picking abilities over the years (that’s why their assets under management continue to swell). We believe hedge fund sentiment should serve as a crucial tool of an individual investor’s stock selection process, as it may offer great insights of how the brightest minds of the finance industry feel about specific stocks. After all, these people have access to smartest analysts and expensive data/information sources that individual investors can’t match. So should one consider investing in Express Scripts Holding Company (NASDAQ:ESRX)? The smart money sentiment can provide an answer to this question.

And that answer is yes! Hedge funds were buying Express Scripts Holding Company (NASDAQ:ESRX) in droves during Q3, as there was a 33% surge in the number of shareholders of the stock, which hit a 3-year high. That rush also pushed Express Scripts onto our list of the 30 Most Popular Stocks Among Hedge Funds for the first time, as it grabbed the 30th and final spot.

Today there are a multitude of metrics shareholders can use to value publicly traded companies. A duo of the less known metrics are hedge fund and insider trading moves. Our experts have shown that, historically, those who follow the top picks of the best fund managers can outperform the market by a superb margin (see the details here).

Heading into the fourth quarter of 2018, a total of 68 of the hedge funds tracked by Insider Monkey held long positions in this stock, a 33% jump from the previous quarter. The graph below displays the number of hedge funds with bullish position in ESRX over the last 13 quarters. So, let’s examine which hedge funds were among the top holders of the stock and which hedge funds were making big moves. 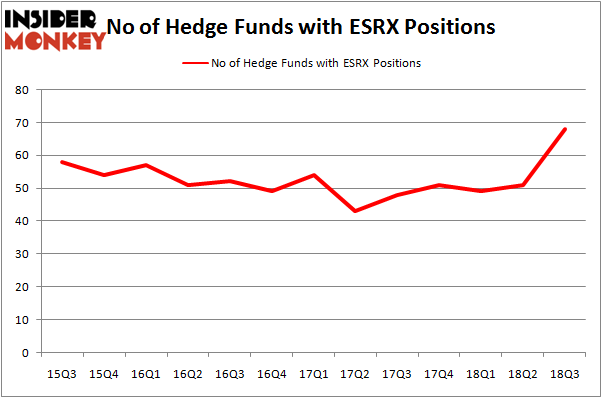 More specifically, Farallon Capital was the largest shareholder of Express Scripts Holding Company (NASDAQ:ESRX), with a stake worth $1.13 billion reported as of the end of September. Trailing Farallon Capital was Pentwater Capital Management, which amassed a stake valued at $1.07 billion. Glenview Capital, Cedar Rock Capital, and Magnetar Capital were also very fond of the stock, giving the stock large weights in their portfolios.

As you can see these stocks had an average of 26 hedge funds with bullish positions and the average amount invested in these stocks was $1.07 billion. That figure was $6.92 billion in ESRX’s case. Boston Scientific Corporation (NYSE:BSX) is the most popular stock in this table. On the other hand America Movil SAB de CV (NYSE:AMX) is the least popular one with only 10 bullish hedge fund positions. Compared to these stocks Express Scripts Holding Company (NASDAQ:ESRX) is way more popular among hedge funds. Considering that hedge funds are fond of this stock in relation to its market cap peers, it may be a good idea to analyze it in detail and potentially include it in your portfolio.

30 Most Popular Stocks Among Hedge Funds in Q3 of 2018Is ESRX A Good Investment Right Now?Is ESRX A Good Stock To Buy?NASDAQ:ESRXYahoo Finance