The 700+ hedge funds and famous money managers tracked by Insider Monkey have already compiled and submitted their 13F filings for the second quarter, which unveil their equity positions as of June 28. We went through these filings, fixed typos and other more significant errors and identified the changes in hedge fund portfolios. Our extensive review of these public filings is finally over, so this article is set to reveal the smart money sentiment towards United States Steel Corporation (NYSE:X).

United States Steel Corporation (NYSE:X) has seen a decrease in hedge fund interest recently. Our calculations also showed that X isn’t among the 30 most popular stocks among hedge funds (view the video below).

To the average investor there are tons of signals market participants have at their disposal to evaluate their holdings. Two of the less utilized signals are hedge fund and insider trading indicators. We have shown that, historically, those who follow the top picks of the best fund managers can outperform the S&P 500 by a solid amount (see the details here). 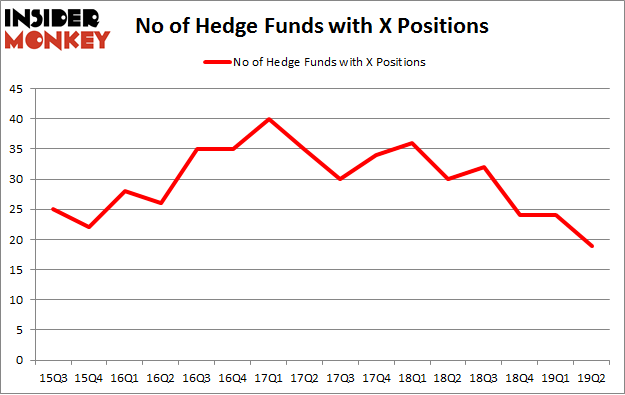 According to Insider Monkey’s hedge fund database, Ken Griffin’s Citadel Investment Group has the most valuable call position in United States Steel Corporation (NYSE:X), worth close to $59.3 million, accounting for less than 0.1%% of its total 13F portfolio. The second largest stake is held by Steve Cohen of Point72 Asset Management, with a $19.3 million position; 0.1% of its 13F portfolio is allocated to the company. Other members of the smart money with similar optimism consist of D. E. Shaw’s D E Shaw, Cliff Asness’s AQR Capital Management and Ken Griffin’s Citadel Investment Group.

Judging by the fact that United States Steel Corporation (NYSE:X) has faced declining sentiment from the entirety of the hedge funds we track, it’s easy to see that there is a sect of fund managers that elected to cut their full holdings last quarter. Intriguingly, Ross Turner’s Pelham Capital sold off the biggest investment of the 750 funds watched by Insider Monkey, worth about $62.2 million in stock, and Jonathan Barrett and Paul Segal’s Luminus Management was right behind this move, as the fund cut about $25.2 million worth. These transactions are important to note, as aggregate hedge fund interest dropped by 5 funds last quarter.

As you can see these stocks had an average of 17 hedge funds with bullish positions and the average amount invested in these stocks was $242 million. That figure was $88 million in X’s case. Alarm.com Holdings, Inc. (NASDAQ:ALRM) is the most popular stock in this table. On the other hand Retail Properties of America Inc (NYSE:RPAI) is the least popular one with only 14 bullish hedge fund positions. United States Steel Corporation (NYSE:X) is not the most popular stock in this group but hedge fund interest is still above average. This is a slightly positive signal but we’d rather spend our time researching stocks that hedge funds are piling on. Our calculations showed that top 20 most popular stocks among hedge funds returned 24.4% in 2019 through September 30th and outperformed the S&P 500 ETF (SPY) by 4 percentage points. Unfortunately X wasn’t nearly as popular as these 20 stocks and hedge funds that were betting on X were disappointed as the stock returned -24.2% during the third quarter and underperformed the market. If you are interested in investing in large cap stocks with huge upside potential, you should check out the top 20 most popular stocks among hedge funds as many of these stocks already outperformed the market so far this year.