Spotify Technology S.A. (NYSE:SPOT) investors should be aware of a decrease in hedge fund sentiment lately. Our calculations also showed that SPOT isn’t among the 30 most popular stocks among hedge funds.

To the average investor there are numerous indicators shareholders put to use to assess publicly traded companies. A duo of the most under-the-radar indicators are hedge fund and insider trading activity. Our experts have shown that, historically, those who follow the top picks of the elite fund managers can trounce the market by a superb margin (see the details here). 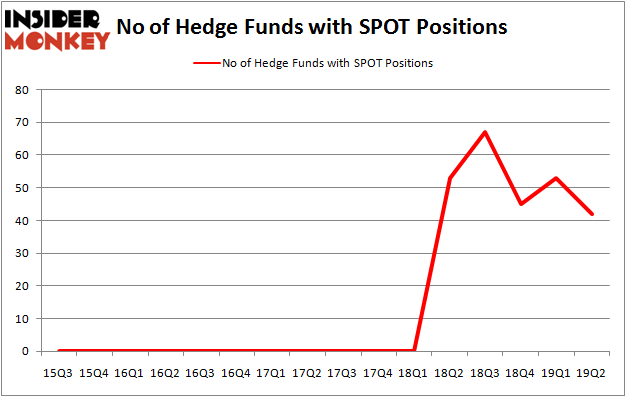 Unlike some fund managers who are betting on Dow reaching 40000 in a year, our long-short investment strategy doesn’t rely on bull markets to deliver double digit returns. We only rely on hedge fund buy/sell signals. Let’s analyze the key hedge fund action regarding Spotify Technology S.A. (NYSE:SPOT).

What does smart money think about Spotify Technology S.A. (NYSE:SPOT)?

At the end of the second quarter, a total of 42 of the hedge funds tracked by Insider Monkey held long positions in this stock, a change of -21% from one quarter earlier. On the other hand, there were a total of 53 hedge funds with a bullish position in SPOT a year ago. With the smart money’s capital changing hands, there exists an “upper tier” of noteworthy hedge fund managers who were adding to their holdings considerably (or already accumulated large positions).

When looking at the institutional investors followed by Insider Monkey, Chase Coleman’s Tiger Global Management LLC has the largest position in Spotify Technology S.A. (NYSE:SPOT), worth close to $608.4 million, accounting for 3.3% of its total 13F portfolio. The second most bullish fund manager is Steadfast Capital Management, led by Robert Pitts, holding a $175.2 million position; 2.3% of its 13F portfolio is allocated to the stock. Remaining peers that are bullish comprise Eric Bannasch’s Cadian Capital, Aaron Cowen’s Suvretta Capital Management and Brett Barakett’s Tremblant Capital.

Judging by the fact that Spotify Technology S.A. (NYSE:SPOT) has faced falling interest from the aggregate hedge fund industry, it’s easy to see that there was a specific group of money managers that elected to cut their full holdings last quarter. Intriguingly, Daniel Lascano’s Lomas Capital Management dropped the largest position of all the hedgies watched by Insider Monkey, comprising close to $56 million in stock, and James Crichton’s Hitchwood Capital Management was right behind this move, as the fund said goodbye to about $43.7 million worth. These moves are intriguing to say the least, as aggregate hedge fund interest was cut by 11 funds last quarter.

As you can see these stocks had an average of 31 hedge funds with bullish positions and the average amount invested in these stocks was $1197 million. That figure was $1748 million in SPOT’s case. First Data Corporation (NYSE:FDC) is the most popular stock in this table. On the other hand Wipro Limited (NYSE:WIT) is the least popular one with only 14 bullish hedge fund positions. Spotify Technology S.A. (NYSE:SPOT) is not the most popular stock in this group but hedge fund interest is still above average. This is a slightly positive signal but we’d rather spend our time researching stocks that hedge funds are piling on. Our calculations showed that top 20 most popular stocks among hedge funds returned 24.4% in 2019 through September 30th and outperformed the S&P 500 ETF (SPY) by 4 percentage points. Unfortunately SPOT wasn’t nearly as popular as these 20 stocks and hedge funds that were betting on SPOT were disappointed as the stock returned -22% during the third quarter and underperformed the market. If you are interested in investing in large cap stocks with huge upside potential, you should check out the top 20 most popular stocks among hedge funds as many of these stocks already outperformed the market so far this year.