Insider Monkey has processed numerous 13F filings of hedge funds and famous investors to create an extensive database of hedge fund holdings. The 13F filings show the hedge funds and investors’ positions as of the end of the third quarter. You can find write-ups about an individual hedge fund’s trades on numerous financial news websites. However, in this article we will take a look at their collective moves and analyze what the smart money thinks of Intuitive Surgical, Inc. (NASDAQ:ISRG) based on that data.

Is Intuitive Surgical, Inc. (NASDAQ:ISRG) a buy right now? Money managers are becoming less confident. The number of long hedge fund positions decreased by 1 recently. Our calculations also showed that ISRG isn’t among the 30 most popular stocks among hedge funds. ISRG was in 44 hedge funds’ portfolios at the end of September. There were 45 hedge funds in our database with ISRG positions at the end of the previous quarter.

How have hedgies been trading Intuitive Surgical, Inc. (NASDAQ:ISRG)?

At the end of the third quarter, a total of 44 of the hedge funds tracked by Insider Monkey held long positions in this stock, a change of -2% from one quarter earlier. The graph below displays the number of hedge funds with bullish position in ISRG over the last 13 quarters. So, let’s check out which hedge funds were among the top holders of the stock and which hedge funds were making big moves. 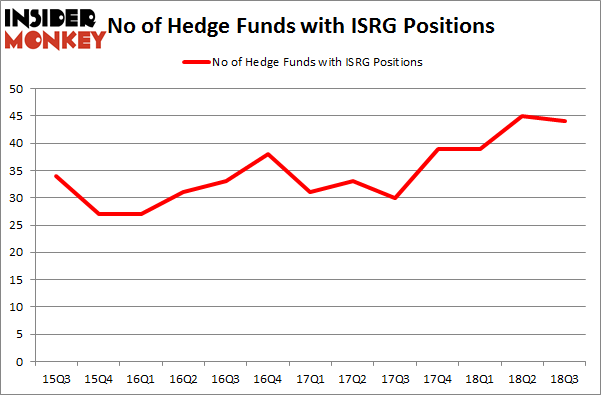 The largest stake in Intuitive Surgical, Inc. (NASDAQ:ISRG) was held by Renaissance Technologies, which reported holding $391.8 million worth of stock at the end of September. It was followed by Millennium Management with a $334.2 million position. Other investors bullish on the company included Citadel Investment Group, Arrowstreet Capital, and AQR Capital Management.

Because Intuitive Surgical, Inc. (NASDAQ:ISRG) has experienced a decline in interest from the aggregate hedge fund industry, it’s safe to say that there lies a certain “tier” of funds that decided to sell off their entire stakes last quarter. Intriguingly, Lee Ainslie’s Maverick Capital dumped the biggest investment of the 700 funds monitored by Insider Monkey, valued at an estimated $10.5 million in stock, and Matthew Hulsizer’s PEAK6 Capital Management was right behind this move, as the fund said goodbye to about $2.8 million worth. These transactions are intriguing to say the least, as total hedge fund interest dropped by 1 funds last quarter.

As you can see these stocks had an average of 38 hedge funds with bullish positions and the average amount invested in these stocks was $2.62 billion. That figure was $2.25 billion in ISRG’s case. Allergan plc (NYSE:AGN) is the most popular stock in this table. On the other hand China Life Insurance Company Ltd. (NYSE:LFC) is the least popular one with only 10 bullish hedge fund positions. Intuitive Surgical, Inc. (NASDAQ:ISRG) is not the most popular stock in this group but hedge fund interest is still above average. This is a slightly positive signal but we’d rather spend our time researching stocks that hedge funds are piling on. In this regard AGN might be a better candidate to consider a long position.

HMI Capital’s Returns, AUM and Holdings
Monthly Newsletter Strategy
Download a free copy of our newsletter and see the details inside!
Hedge Fund Resource Center
Related News
Rise of the Machines: Why It’s Time to Invest in Robots What Smart Money Thinks about Intuitive Surgical, Inc. (ISRG)? Why Yahoo, Intel, Cree, Intuitive Surgical, and More Are Making Headlines Five Stocks in Spotlight Following Earnings Reports Apple (AAPL) Bulls Are Charging Again, While Schlumberger, Starbucks and American Express Are Making Earnings Moves of their Own How Does Smart Money Feel About Intuitive Surgical, Inc. (ISRG)? Five Stocks that Are Registering Gains on Wednesday for Various Reasons The 10 Best Islands to Visit in 2019 5 Most Socially Responsible Companies in America 5 Ways You Can Eliminate Credit Card Debt
Billionaire Hedge Funds