After several tireless days we have finished crunching the numbers from nearly 750 13F filings issued by the elite hedge funds and other investment firms that we track at Insider Monkey, which disclosed those firms’ equity portfolios as of June 28. The results of that effort will be put on display in this article, as we share valuable insight into the smart money sentiment towards Gol Linhas Aereas Inteligentes SA (NYSE:GOL).

Gol Linhas Aereas Inteligentes SA (NYSE:GOL) shareholders have witnessed a decrease in support from the world’s most elite money managers recently. GOL was in 8 hedge funds’ portfolios at the end of the second quarter of 2019. There were 16 hedge funds in our database with GOL positions at the end of the previous quarter. Our calculations also showed that GOL isn’t among the 30 most popular stocks among hedge funds (view the video below).

In the financial world there are a multitude of signals market participants employ to evaluate publicly traded companies. Some of the most underrated signals are hedge fund and insider trading interest. Our researchers have shown that, historically, those who follow the best picks of the top hedge fund managers can outperform their index-focused peers by a superb amount (see the details here). 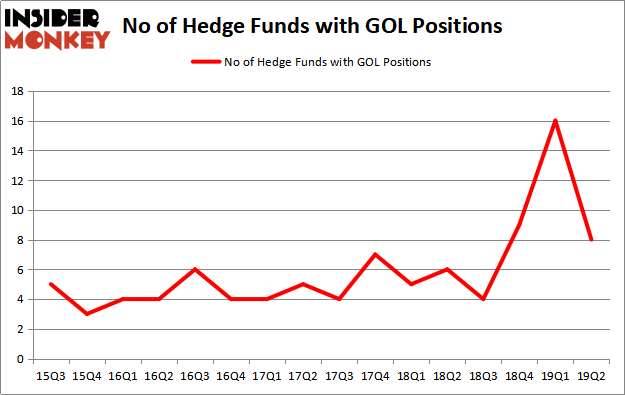 When looking at the institutional investors followed by Insider Monkey, Contrarian Capital, managed by Jon Bauer, holds the number one position in Gol Linhas Aereas Inteligentes SA (NYSE:GOL). Contrarian Capital has a $115.8 million position in the stock, comprising 11% of its 13F portfolio. On Contrarian Capital’s heels is Renaissance Technologies holding a $55.7 million position; the fund has less than 0.1%% of its 13F portfolio invested in the stock. Other peers with similar optimism comprise Israel Englander’s Millennium Management, John Overdeck and David Siegel’s Two Sigma Advisors and David Costen Haley’s HBK Investments.

Because Gol Linhas Aereas Inteligentes SA (NYSE:GOL) has experienced falling interest from the entirety of the hedge funds we track, it’s safe to say that there lies a certain “tier” of hedgies that decided to sell off their full holdings last quarter. Interestingly, Jonathan Barrett and Paul Segal’s Luminus Management sold off the biggest investment of all the hedgies followed by Insider Monkey, totaling about $14.7 million in stock. Ken Heebner’s fund, Capital Growth Management, also dropped its stock, about $5.7 million worth. These transactions are interesting, as aggregate hedge fund interest was cut by 8 funds last quarter.

As you can see these stocks had an average of 13.75 hedge funds with bullish positions and the average amount invested in these stocks was $59 million. That figure was $200 million in GOL’s case. EnerSys (NYSE:ENS) is the most popular stock in this table. On the other hand Old National Bancorp (NASDAQ:ONB) is the least popular one with only 10 bullish hedge fund positions. Compared to these stocks Gol Linhas Aereas Inteligentes SA (NYSE:GOL) is even less popular than ONB. Hedge funds dodged a bullet by taking a bearish stance towards GOL. Our calculations showed that the top 20 most popular hedge fund stocks returned 24.4% in 2019 through September 30th and outperformed the S&P 500 ETF (SPY) by 4 percentage points. Unfortunately GOL wasn’t nearly as popular as these 20 stocks (hedge fund sentiment was very bearish); GOL investors were disappointed as the stock returned -8.4% during the third quarter and underperformed the market. If you are interested in investing in large cap stocks with huge upside potential, you should check out the top 20 most popular stocks among hedge funds as many of these stocks already outperformed the market so far in 2019.