Is Fresenius Medical Care AG & Co. KGaA (NYSE:FMS) a good place to invest some of your money right now? We can gain invaluable insight to help us answer that question by studying the investment trends of top investors, who employ world-class Ivy League graduates, who are given immense resources and industry contacts to put their financial expertise to work. The top picks of these firms have historically outperformed the market when we account for known risk factors, making them very valuable investment ideas.

Is Fresenius Medical Care AG & Co. KGaA (NYSE:FMS) a great stock to buy now? Prominent investors are selling. The number of long hedge fund positions fell by 4 recently. Our calculations also showed that FMS isn’t among the 30 most popular stocks among hedge funds (click for Q3 rankings and see the video below for Q2 rankings). FMS was in 5 hedge funds’ portfolios at the end of the third quarter of 2019. There were 9 hedge funds in our database with FMS holdings at the end of the previous quarter.

In the 21st century investor’s toolkit there are several tools stock traders put to use to assess their stock investments. A pair of the most underrated tools are hedge fund and insider trading sentiment. Our researchers have shown that, historically, those who follow the top picks of the elite money managers can trounce their index-focused peers by a significant amount (see the details here).

We leave no stone unturned when looking for the next great investment idea. For example Discover is offering this insane cashback card, so we look into shorting the stock. One of the most bullish analysts in America just put his money where his mouth is. He says, “I’m investing more today than I did back in early 2009.” So we check out his pitch. We read hedge fund investor letters and listen to stock pitches at hedge fund conferences. We even check out this option genius’ weekly trade ideas. This December, we recommended Adams Energy as a one-way bet based on an under-the-radar fund manager’s investor letter and the stock already gained 20 percent. Now let’s go over the new hedge fund action encompassing Fresenius Medical Care AG & Co. KGaA (NYSE:FMS).

Heading into the fourth quarter of 2019, a total of 5 of the hedge funds tracked by Insider Monkey were long this stock, a change of -44% from one quarter earlier. The graph below displays the number of hedge funds with bullish position in FMS over the last 17 quarters. With the smart money’s sentiment swirling, there exists a select group of key hedge fund managers who were upping their stakes substantially (or already accumulated large positions). 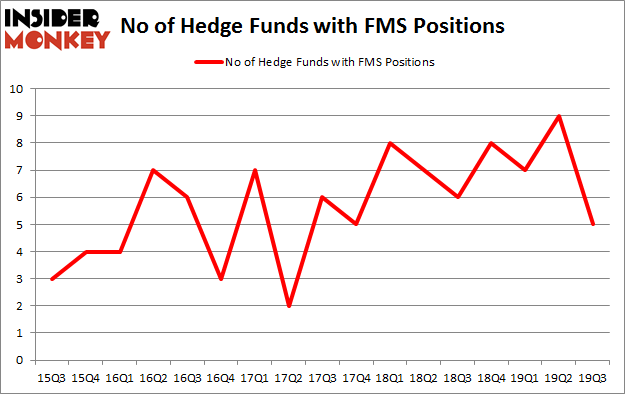 Among these funds, Marshall Wace held the most valuable stake in Fresenius Medical Care AG & Co. KGaA (NYSE:FMS), which was worth $2.2 million at the end of the third quarter. On the second spot was Renaissance Technologies which amassed $0.9 million worth of shares. PEAK6 Capital Management, D E Shaw, and Point72 Asset Management were also very fond of the stock, becoming one of the largest hedge fund holders of the company. In terms of the portfolio weights assigned to each position Marshall Wace allocated the biggest weight to Fresenius Medical Care AG & Co. KGaA (NYSE:FMS), around 0.02% of its 13F portfolio. PEAK6 Capital Management is also relatively very bullish on the stock, dishing out 0.0017 percent of its 13F equity portfolio to FMS.

Seeing as Fresenius Medical Care AG & Co. KGaA (NYSE:FMS) has faced a decline in interest from the smart money, it’s easy to see that there exists a select few hedge funds that elected to cut their full holdings by the end of the third quarter. At the top of the heap, Peter Rathjens, Bruce Clarke and John Campbell’s Arrowstreet Capital sold off the largest position of the 750 funds watched by Insider Monkey, worth an estimated $1.8 million in stock, and Michael Gelband’s ExodusPoint Capital was right behind this move, as the fund said goodbye to about $0.9 million worth. These moves are important to note, as aggregate hedge fund interest was cut by 4 funds by the end of the third quarter.

As you can see these stocks had an average of 28 hedge funds with bullish positions and the average amount invested in these stocks was $1121 million. That figure was $4 million in FMS’s case. Match Group, Inc. (NASDAQ:MTCH) is the most popular stock in this table. On the other hand TAL Education Group (NYSE:TAL) is the least popular one with only 20 bullish hedge fund positions. Compared to these stocks Fresenius Medical Care AG & Co. KGaA (NYSE:FMS) is even less popular than TAL. Our calculations showed that top 20 most popular stocks among hedge funds returned 37.4% in 2019 through the end of November and outperformed the S&P 500 ETF (SPY) by 9.9 percentage points. A small number of hedge funds were also right about betting on FMS, though not to the same extent, as the stock returned 9.1% during the fourth quarter (through 11/30) and outperformed the market as well.