The government requires hedge funds and wealthy investors with over a certain portfolio size to file a report that shows their positions at the end of every quarter. Even though it isn’t the intention, these filings level the playing field for ordinary investors. The latest round of 13F filings discloses the funds’ positions on June 30. We at Insider Monkey have made an extensive database of more than 700 of those elite funds and prominent investors’ filings. In this article, we analyze how these elite funds and prominent investors traded Altaba Inc. (NASDAQ:AABA) based on those filings.

If you’d ask most market participants, hedge funds are viewed as worthless, outdated financial vehicles of the past. While there are more than 8000 funds in operation at present, We look at the aristocrats of this group, approximately 700 funds. Most estimates calculate that this group of people shepherd most of the smart money’s total asset base, and by keeping track of their inimitable picks, Insider Monkey has deciphered a few investment strategies that have historically defeated the market. Insider Monkey’s flagship best performing hedge funds strategy returned 17.4% year to date and outperformed the market by more than 14 percentage points this year. This strategy also outperformed the market by 3 percentage points in the fourth quarter despite the market volatility (see the details here).

What have hedge funds been doing with Altaba Inc. (NASDAQ:AABA)?

Heading into the fourth quarter of 2018, a total of 95 of the hedge funds tracked by Insider Monkey were long this stock, a change of -5% from one quarter earlier. By comparison, 113 hedge funds held shares or bullish call options in AABA heading into this year. With the smart money’s capital changing hands, there exists a select group of notable hedge fund managers who were boosting their stakes significantly (or already accumulated large positions). 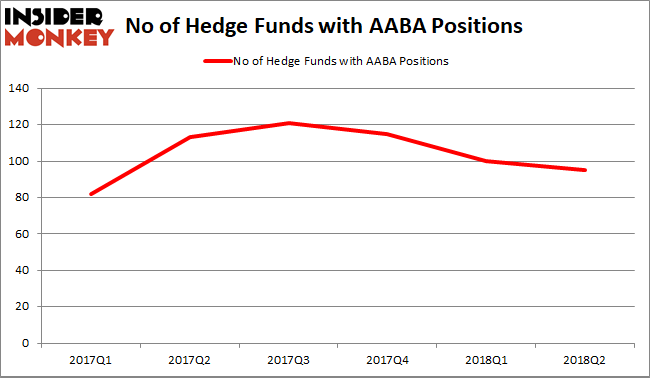 More specifically, Canyon Capital Advisors was the largest shareholder of Altaba Inc. (NASDAQ:AABA), with a stake worth $3192.2 millions reported as of the end of June. Trailing Canyon Capital Advisors was Elliott Management, which amassed a stake valued at $1621.5 millions. FinePoint Capital, Courage Capital, and Aristeia Capital were also very fond of the stock, giving the stock large weights in their portfolios.

Seeing as Altaba Inc. (NASDAQ:AABA) has witnessed bearish sentiment from hedge fund managers, it’s safe to say that there were a few hedgies who were dropping their full holdings last quarter. It’s worth mentioning that Aaron Cowen’s Suvretta Capital Management dumped the biggest investment of the 700 funds monitored by Insider Monkey, comprising an estimated $231.9 million in stock, and Michael Kaine’s Numina Capital was right behind this move, as the fund cut about $147.2 million worth. These bearish behaviors are important to note, as aggregate hedge fund interest fell by 5 funds last quarter.

Let’s check out hedge fund activity in other stocks – not necessarily in the same industry as Altaba Inc. (NASDAQ:AABA) but similarly valued. We will take a look at Prudential Public Limited Company (ADR) (NYSE:PUK), The Chubb Corporation (NYSE:CB), Automatic Data Processing (NASDAQ:ADP), and Tesla Motors Inc (NASDAQ:TSLA). All of these stocks’ market caps are similar to AABA’s market cap.

As you can see these stocks had an average of 22.5 hedge funds with bullish positions and the average amount invested in these stocks was $1165 million. That figure was $22407 million in AABA’s case. Automatic Data Processing (NASDAQ:ADP) is the most popular stock in this table. On the other hand Prudential Public Limited Company (ADR) (NYSE:PUK) is the least popular one with only 6 bullish hedge fund positions. Compared to these stocks Altaba Inc. (NASDAQ:AABA) is more popular among hedge funds because Altaba shares offer a low risk arbitrage opportunity for hedge funds. Many of the hedge funds are long Altaba but they hedge the exposure to Alibaba Group Holding Limited (BABA) shares by shorting the stock. Altaba shares trade at a significant discount to its net asset value, so this looks like a sure way of making money. The main issue with this trade is that we don’t know when and how the discount would be eliminated. In any case, if you think Alibaba is a good long-term investment, it is better to buy Altaba stock than Alibaba stock.