Hedge Funds Are Crazy About ON Semiconductor Corporation (ON)

Concerns over rising interest rates and expected further rate increases have hit several stocks hard during the fourth quarter. NASDAQ and Russell 2000 indices were already in correction territory. More importantly, Russell 2000 ETF (IWM) underperformed the larger S&P 500 ETF (SPY) by nearly 7 percentage points in the fourth quarter. Hedge funds and institutional investors tracked by Insider Monkey usually invest a disproportionate amount of their portfolios in smaller cap stocks. We have been receiving indications that hedge funds were paring back their overall exposure and this is one of the factors behind the recent movements in major indices. In this article, we will take a closer look at hedge fund sentiment towards ON Semiconductor Corporation (NASDAQ:ON).

ON Semiconductor Corporation (NASDAQ:ON) was in 29 hedge funds’ portfolios at the end of the fourth quarter of 2018. ON investors should be aware of an increase in enthusiasm from smart money of late. There were 27 hedge funds in our database with ON holdings at the end of the previous quarter. Our calculations also showed that ON isn’t among the 30 most popular stocks among hedge funds.

Let’s take a glance at the recent hedge fund action regarding ON Semiconductor Corporation (NASDAQ:ON).

What have hedge funds been doing with ON Semiconductor Corporation (NASDAQ:ON)? 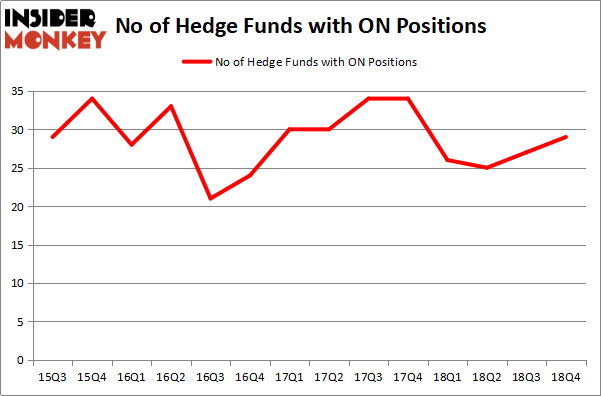 Among these funds, Blue Harbour Group held the most valuable stake in ON Semiconductor Corporation (NASDAQ:ON), which was worth $89.2 million at the end of the third quarter. On the second spot was Millennium Management which amassed $53.1 million worth of shares. Moreover, Arrowstreet Capital, Holocene Advisors, and Simcoe Capital Management were also bullish on ON Semiconductor Corporation (NASDAQ:ON), allocating a large percentage of their portfolios to this stock.

As one would reasonably expect, key money managers were breaking ground themselves. Holocene Advisors, managed by Brandon Haley, created the most outsized position in ON Semiconductor Corporation (NASDAQ:ON). Holocene Advisors had $42.7 million invested in the company at the end of the quarter. Howard Marks’s Oaktree Capital Management also made a $18.2 million investment in the stock during the quarter. The following funds were also among the new ON investors: Brian Ashford-Russell and Tim Woolley’s Polar Capital, Anand Parekh’s Alyeska Investment Group, and Ken Fisher’s Fisher Asset Management.

As you can see these stocks had an average of 19.5 hedge funds with bullish positions and the average amount invested in these stocks was $475 million. That figure was $423 million in ON’s case. Gaming and Leisure Properties Inc (NASDAQ:GLPI) is the most popular stock in this table. On the other hand Enel Chile S.A. (NYSE:ENIC) is the least popular one with only 7 bullish hedge fund positions. Compared to these stocks ON Semiconductor Corporation (NASDAQ:ON) is more popular among hedge funds. Our calculations showed that top 15 most popular stocks among hedge funds returned 21.3% through April 8th and outperformed the S&P 500 ETF (SPY) by more than 5 percentage points. Hedge funds were also right about betting on ON as the stock returned 38.8% and outperformed the market as well.