We know that hedge funds generate strong, risk-adjusted returns over the long run, which is why imitating the picks that they are collectively bullish on can be a profitable strategy for retail investors. With billions of dollars in assets, professional investors have to conduct complex analyses, spend many resources and use tools that are not always available for the general crowd. This doesn’t mean that they don’t have occasional colossal losses; they do. However, it is still a good idea to keep an eye on hedge fund activity. With this in mind, let’s examine the smart money sentiment towards Extra Space Storage, Inc. (NYSE:EXR) and determine whether hedge funds skillfully traded this stock.

Is Extra Space Storage, Inc. (NYSE:EXR) undervalued? The smart money was becoming hopeful. The number of bullish hedge fund bets improved by 11 recently. Extra Space Storage, Inc. (NYSE:EXR) was in 27 hedge funds’ portfolios at the end of the second quarter of 2020. The all time high for this statistics is 30. Our calculations also showed that EXR isn’t among the 30 most popular stocks among hedge funds (click for Q2 rankings and see the video for a quick look at the top 5 stocks). There were 16 hedge funds in our database with EXR positions at the end of the first quarter.

To most market participants, hedge funds are seen as underperforming, old financial vehicles of yesteryear. While there are more than 8000 funds trading at the moment, Our researchers choose to focus on the aristocrats of this club, approximately 850 funds. These money managers administer the majority of the smart money’s total asset base, and by tracking their highest performing investments, Insider Monkey has unsheathed a number of investment strategies that have historically defeated the market. Insider Monkey’s flagship short hedge fund strategy surpassed the S&P 500 short ETFs by around 20 percentage points annually since its inception in March 2017. Our portfolio of short stocks lost 34% since February 2017 (through August 17th) even though the market was up 53% during the same period. We just shared a list of 8 short targets in our latest quarterly update .

At Insider Monkey we scour multiple sources to uncover the next great investment idea. For example, legal marijuana is one of the fastest growing industries right now, so we are checking out stock pitches like “the Starbucks of cannabis” to identify the next tenbagger. We go through lists like the 10 most profitable companies in the world to pick the best large-cap stocks to buy. Even though we recommend positions in only a tiny fraction of the companies we analyze, we check out as many stocks as we can. We read hedge fund investor letters and listen to stock pitches at hedge fund conferences. You can subscribe to our free daily newsletter on our website to get excerpts of these letters in your inbox. Keeping this in mind let’s view the latest hedge fund action encompassing Extra Space Storage, Inc. (NYSE:EXR).

At the end of June, a total of 27 of the hedge funds tracked by Insider Monkey were long this stock, a change of 69% from one quarter earlier. The graph below displays the number of hedge funds with bullish position in EXR over the last 20 quarters. With the smart money’s sentiment swirling, there exists an “upper tier” of notable hedge fund managers who were upping their stakes meaningfully (or already accumulated large positions). 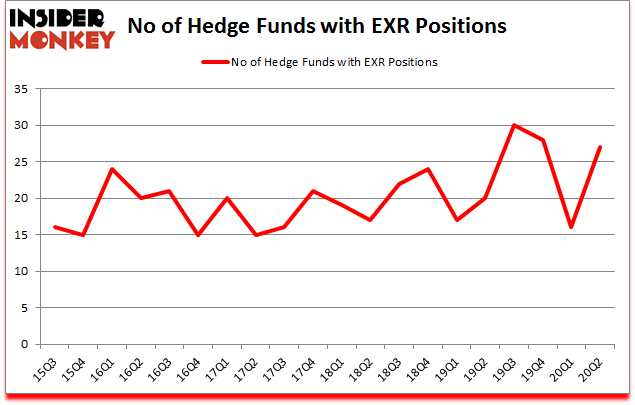 The largest stake in Extra Space Storage, Inc. (NYSE:EXR) was held by Renaissance Technologies, which reported holding $37.4 million worth of stock at the end of September. It was followed by Zimmer Partners with a $25.4 million position. Other investors bullish on the company included Citadel Investment Group, Echo Street Capital Management, and Waterfront Capital Partners. In terms of the portfolio weights assigned to each position Waterfront Capital Partners allocated the biggest weight to Extra Space Storage, Inc. (NYSE:EXR), around 2.55% of its 13F portfolio. Gillson Capital is also relatively very bullish on the stock, dishing out 1.97 percent of its 13F equity portfolio to EXR.

As one would reasonably expect, some big names have been driving this bullishness. Zimmer Partners, managed by Stuart J. Zimmer, created the most outsized position in Extra Space Storage, Inc. (NYSE:EXR). Zimmer Partners had $25.4 million invested in the company at the end of the quarter. Greg Poole’s Echo Street Capital Management also made a $16.9 million investment in the stock during the quarter. The following funds were also among the new EXR investors: Eduardo Abush’s Waterfront Capital Partners, Daniel Johnson’s Gillson Capital, and Mark Coe’s Intrinsic Edge Capital.

As you can see these stocks had an average of 22.6 hedge funds with bullish positions and the average amount invested in these stocks was $289 million. That figure was $176 million in EXR’s case. KeyCorp (NYSE:KEY) is the most popular stock in this table. On the other hand POSCO (NYSE:PKX) is the least popular one with only 10 bullish hedge fund positions. Extra Space Storage, Inc. (NYSE:EXR) is not the most popular stock in this group but hedge fund interest is still above average. Our overall hedge fund sentiment score for EXR is 68.5. Stocks with higher number of hedge fund positions relative to other stocks as well as relative to their historical range receive a higher sentiment score. Our calculations showed that top 10 most popular stocks among hedge funds returned 41.4% in 2019 and outperformed the S&P 500 ETF (SPY) by 10.1 percentage points. These stocks gained 21.3% in 2020 through September 25th and still beat the market by 17.7 percentage points. Hedge funds were also right about betting on EXR as the stock returned 15.1% during Q3 (through September 25th) and outperformed the market. Hedge funds were rewarded for their relative bullishness.