How do we determine whether Global Medical REIT Inc. (NYSE:GMRE) makes for a good investment at the moment? We analyze the sentiment of a select group of the very best investors in the world, who spend immense amounts of time and resources studying companies. They may not always be right (no one is), but data shows that their consensus long positions have historically outperformed the market when we adjust for known risk factors.

Is Global Medical REIT Inc. (NYSE:GMRE) a buy, sell, or hold? Prominent investors are getting less optimistic. The number of bullish hedge fund positions were trimmed by 3 lately. Our calculations also showed that GMRE isn’t among the 30 most popular stocks among hedge funds (see the video below). 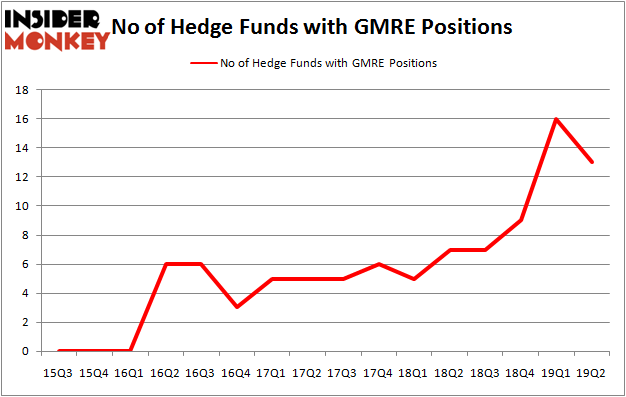 Unlike other investors who track every movement of the 25 largest hedge funds, our long-short investment strategy relies on hedge fund buy/sell signals given by the 100 best performing hedge funds. Let’s go over the fresh hedge fund action surrounding Global Medical REIT Inc. (NYSE:GMRE).

How have hedgies been trading Global Medical REIT Inc. (NYSE:GMRE)?

At Q2’s end, a total of 13 of the hedge funds tracked by Insider Monkey held long positions in this stock, a change of -19% from the previous quarter. Below, you can check out the change in hedge fund sentiment towards GMRE over the last 16 quarters. So, let’s find out which hedge funds were among the top holders of the stock and which hedge funds were making big moves.

According to Insider Monkey’s hedge fund database, Marshall Wace LLP, managed by Paul Marshall and Ian Wace, holds the number one position in Global Medical REIT Inc. (NYSE:GMRE). Marshall Wace LLP has a $5.5 million position in the stock, comprising less than 0.1%% of its 13F portfolio. Sitting at the No. 2 spot is Israel Englander of Millennium Management, with a $3.6 million position; the fund has less than 0.1%% of its 13F portfolio invested in the stock. Some other peers that hold long positions consist of Renaissance Technologies, John Overdeck and David Siegel’s Two Sigma Advisors and David M. Knott’s Dorset Management.

Seeing as Global Medical REIT Inc. (NYSE:GMRE) has witnessed declining sentiment from the aggregate hedge fund industry, it’s safe to say that there were a few hedge funds that elected to cut their entire stakes by the end of the second quarter. Interestingly, Anand Parekh’s Alyeska Investment Group sold off the largest stake of the “upper crust” of funds watched by Insider Monkey, worth an estimated $5.3 million in stock, and Clint Carlson’s Carlson Capital was right behind this move, as the fund dumped about $3.9 million worth. These bearish behaviors are important to note, as aggregate hedge fund interest was cut by 3 funds by the end of the second quarter.

As you can see these stocks had an average of 10.25 hedge funds with bullish positions and the average amount invested in these stocks was $34 million. That figure was $17 million in GMRE’s case. Anworth Mortgage Asset Corporation (NYSE:ANH) is the most popular stock in this table. On the other hand Purple Innovation, Inc. (NASDAQ:PRPL) is the least popular one with only 3 bullish hedge fund positions. Global Medical REIT Inc. (NYSE:GMRE) is not the most popular stock in this group but hedge fund interest is still above average. Our calculations showed that top 20 most popular stocks among hedge funds returned 24.4% in 2019 through September 30th and outperformed the S&P 500 ETF (SPY) by 4 percentage points. Hedge funds were also right about betting on GMRE as the stock returned 10.5% during the third quarter and outperformed the market. Hedge funds were rewarded for their relative bullishness.

SunOpta, Inc. (STKL) Is Burning These Hedge Funds
Monthly Newsletter Strategy
Download a free copy of our newsletter and see the details inside!
Hedge Fund Resource Center
Related News
Hedge Funds Have Never Been This Bullish On Global Medical REIT Inc. (GMRE) How Recent IPO Global Medical REIT Inc (GMRE) Stacks Up Against Its Peers 11 Largest Auto Insurance Companies In The US In 2019 10 Poorest Cities in America in 2019 8 Lowest Tar and Nicotine Cigarette Brands in 2019
Billionaire Hedge Funds