Most investors tend to think that hedge funds and other asset managers are worthless, as they cannot beat even simple index fund portfolios. In fact, most people expect hedge funds to compete with and outperform the bull market that we have witnessed in recent years. However, hedge funds are generally partially hedged and aim at delivering attractive risk-adjusted returns rather than following the ups and downs of equity markets hoping that they will outperform the broader market. Our research shows that certain hedge funds do have great stock picking skills (and we can identify these hedge funds in advance pretty accurately), so let’s take a glance at the smart money sentiment towards Tapestry, Inc. (NYSE:TPR).

Tapestry, Inc. (NYSE:TPR) was in 32 hedge funds’ portfolios at the end of the second quarter of 2019. TPR investors should be aware of an increase in support from the world’s most elite money managers recently. There were 29 hedge funds in our database with TPR holdings at the end of the previous quarter. Our calculations also showed that TPR isn’t among the 30 most popular stocks among hedge funds (see the video below).

Unlike this former hedge fund manager who is convinced Dow will soar past 40000, our long-short investment strategy doesn’t rely on bull markets to deliver double digit returns. We only rely on hedge fund buy/sell signals. Let’s take a look at the recent hedge fund action regarding Tapestry, Inc. (NYSE:TPR). 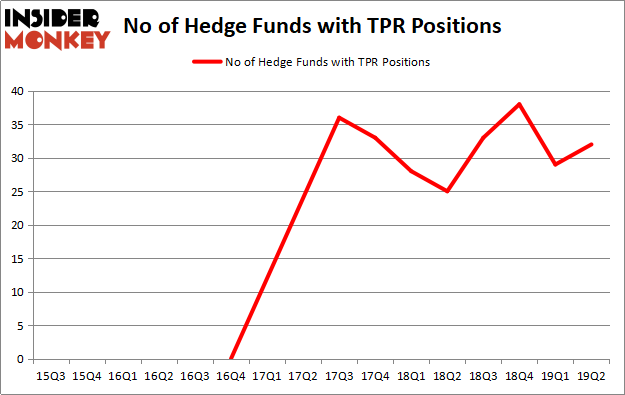 According to publicly available hedge fund and institutional investor holdings data compiled by Insider Monkey, Two Sigma Advisors, managed by John Overdeck and David Siegel, holds the biggest position in Tapestry, Inc. (NYSE:TPR). Two Sigma Advisors has a $118.4 million position in the stock, comprising 0.3% of its 13F portfolio. Coming in second is D. E. Shaw of D E Shaw, with a $81.8 million position; the fund has 0.1% of its 13F portfolio invested in the stock. Some other hedge funds and institutional investors with similar optimism comprise Israel Englander’s Millennium Management, Anand Parekh’s Alyeska Investment Group and Ken Griffin’s Citadel Investment Group.