Sun Communities Inc (NYSE:SUI) was in 20 hedge funds’ portfolios at the end of the second quarter of 2019. SUI has experienced an increase in activity from the world’s largest hedge funds of late. There were 18 hedge funds in our database with SUI positions at the end of the previous quarter. Our calculations also showed that SUI isn’t among the 30 most popular stocks among hedge funds.

Unlike this former hedge fund manager who is convinced Dow will soar past 40000, our long-short investment strategy doesn’t rely on bull markets to deliver double digit returns. We only rely on hedge fund buy/sell signals. Let’s take a peek at the recent hedge fund action encompassing Sun Communities Inc (NYSE:SUI).

At Q2’s end, a total of 20 of the hedge funds tracked by Insider Monkey were bullish on this stock, a change of 11% from one quarter earlier. Below, you can check out the change in hedge fund sentiment towards SUI over the last 16 quarters. With hedge funds’ positions undergoing their usual ebb and flow, there exists a select group of noteworthy hedge fund managers who were increasing their holdings significantly (or already accumulated large positions). 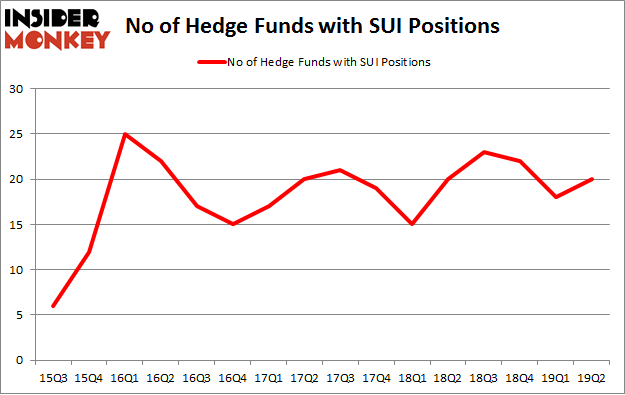 According to Insider Monkey’s hedge fund database, Citadel Investment Group, managed by Ken Griffin, holds the number one position in Sun Communities Inc (NYSE:SUI). Citadel Investment Group has a $120.1 million position in the stock, comprising 0.1% of its 13F portfolio. The second Renaissance Technologies, with a $97.6 million position; the fund has 0.1% of its 13F portfolio invested in the stock. Some other members of the smart money that are bullish encompass Israel Englander’s Millennium Management, Brad Dunkley and Blair Levinsky’s Waratah Capital Advisors and Greg Poole’s Echo Street Capital Management.

With a general bullishness amongst the heavyweights, some big names have been driving this bullishness. Element Capital Management, managed by Jeffrey Talpins, created the most valuable position in Sun Communities Inc (NYSE:SUI). Element Capital Management had $32.2 million invested in the company at the end of the quarter. Louis Navellier’s Navellier & Associates also made a $2.8 million investment in the stock during the quarter. The following funds were also among the new SUI investors: Jaime Sterne’s Skye Global Management, Mario Gabelli’s GAMCO Investors, and Matthew Tewksbury’s Stevens Capital Management.

As you can see these stocks had an average of 34.25 hedge funds with bullish positions and the average amount invested in these stocks was $2027 million. That figure was $429 million in SUI’s case. PG&E Corporation (NYSE:PCG) is the most popular stock in this table. On the other hand Nomura Holdings, Inc. (NYSE:NMR) is the least popular one with only 7 bullish hedge fund positions. Sun Communities Inc (NYSE:SUI) is not the least popular stock in this group but hedge fund interest is still below average. Our calculations showed that top 20 most popular stocks (see the video below) among hedge funds returned 24.4% in 2019 through September 30th and outperformed the S&P 500 ETF (SPY) by 4 percentage points. A small number of hedge funds were also right about betting on SUI as the stock returned 16.4% during the same time frame and outperformed the market by an even larger margin.