We at Insider Monkey have gone over 700 13F filings that hedge funds and prominent investors are required to file by the SEC The 13F filings show the funds’ and investors’ portfolio positions as of December 31st. In this article, we look at what those funds think of Sealed Air Corporation (NYSE:SEE) based on that data.

Is Sealed Air Corporation (NYSE:SEE) a buy right now? Money managers are turning bullish. The number of long hedge fund bets moved up by 1 recently. Our calculations also showed that SEE isn’t among the 30 most popular stocks among hedge funds.

What have hedge funds been doing with Sealed Air Corporation (NYSE:SEE)? 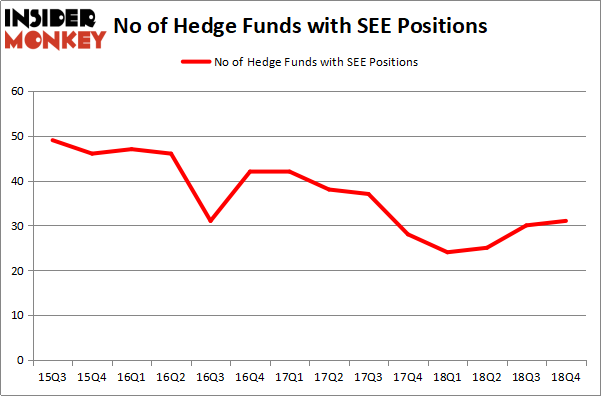 The largest stake in Sealed Air Corporation (NYSE:SEE) was held by Kensico Capital, which reported holding $204 million worth of stock at the end of September. It was followed by Rivulet Capital with a $151.6 million position. Other investors bullish on the company included Millennium Management, Impax Asset Management, and Nitorum Capital.

With a general bullishness amongst the heavyweights, key money managers were breaking ground themselves. Rivulet Capital, managed by Barry Lebovits and Joshua Kuntz, initiated the most outsized position in Sealed Air Corporation (NYSE:SEE). Rivulet Capital had $151.6 million invested in the company at the end of the quarter. Andreas Halvorsen’s Viking Global also initiated a $29.6 million position during the quarter. The following funds were also among the new SEE investors: Jim Simons’s Renaissance Technologies, Nick Niell’s Arrowgrass Capital Partners, and David MacKnight’s One Fin Capital Management.

As you can see these stocks had an average of 22.75 hedge funds with bullish positions and the average amount invested in these stocks was $391 million. That figure was $941 million in SEE’s case. Charles River Laboratories International Inc. (NYSE:CRL) is the most popular stock in this table. On the other hand Bio-Techne Corporation (NASDAQ:TECH) is the least popular one with only 17 bullish hedge fund positions. Compared to these stocks Sealed Air Corporation (NYSE:SEE) is more popular among hedge funds. Our calculations showed that top 15 most popular stocks among hedge funds returned 21.3% through April 8th and outperformed the S&P 500 ETF (SPY) by more than 5 percentage points. Hedge funds were also right about betting on SEE as the stock returned 33.1% and outperformed the market as well.