With the first-quarter round of 13F filings behind us it is time to take a look at the stocks in which some of the best money managers in the world preferred to invest or sell heading into the second quarter. One of these stocks was NXP Semiconductors NV (NASDAQ:NXPI).

Is NXP Semiconductors NV (NASDAQ:NXPI) a buy, sell, or hold? Investors who are in the know are in an optimistic mood. The number of bullish hedge fund positions went up by 8 lately. Our calculations also showed that NXPI isn’t among the 30 most popular stocks among hedge funds.

According to most shareholders, hedge funds are viewed as worthless, outdated financial vehicles of yesteryear. While there are more than 8000 funds trading at the moment, We choose to focus on the masters of this group, around 750 funds. These money managers command bulk of the hedge fund industry’s total capital, and by monitoring their matchless investments, Insider Monkey has unsheathed numerous investment strategies that have historically defeated the S&P 500 index. Insider Monkey’s flagship hedge fund strategy exceeded the S&P 500 index by around 5 percentage points per annum since its inception in May 2014. We were able to generate large returns even by identifying short candidates. Our portfolio of short stocks lost 25.7% since February 2017 (through September 30th) even though the market was up more than 33% during the same period. We just shared a list of 10 short targets in our latest quarterly update . 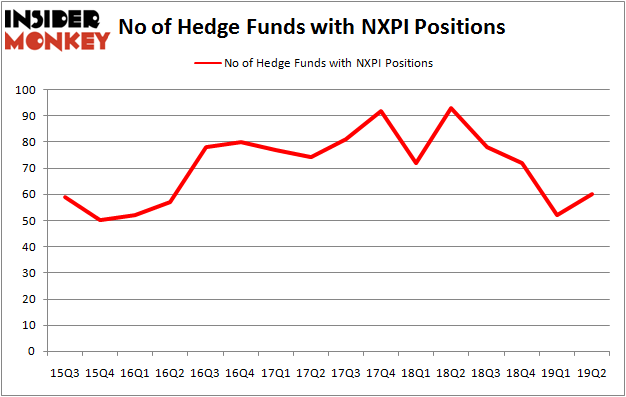 Unlike some fund managers who are betting on Dow reaching 40000 in a year, our long-short investment strategy doesn’t rely on bull markets to deliver double digit returns. We only rely on hedge fund buy/sell signals. Let’s go over the fresh hedge fund action regarding NXP Semiconductors NV (NASDAQ:NXPI).

At the end of the second quarter, a total of 60 of the hedge funds tracked by Insider Monkey were long this stock, a change of 15% from the first quarter of 2019. By comparison, 93 hedge funds held shares or bullish call options in NXPI a year ago. With hedge funds’ positions undergoing their usual ebb and flow, there exists a few notable hedge fund managers who were upping their stakes substantially (or already accumulated large positions).

According to Insider Monkey’s hedge fund database, Eric W. Mandelblatt and Gaurav Kapadia’s Soroban Capital Partners has the largest position in NXP Semiconductors NV (NASDAQ:NXPI), worth close to $585.7 million, comprising 8.8% of its total 13F portfolio. Sitting at the No. 2 spot is D E Shaw, managed by D. E. Shaw, which holds a $376.9 million position; 0.5% of its 13F portfolio is allocated to the stock. Some other professional money managers that hold long positions include Israel Englander’s Millennium Management and Ken Griffin’s Citadel Investment Group.

As one would reasonably expect, key hedge funds were leading the bulls’ herd. Point State Capital, managed by Zach Schreiber, created the most outsized position in NXP Semiconductors NV (NASDAQ:NXPI). Point State Capital had $130 million invested in the company at the end of the quarter. Brandon Haley’s Holocene Advisors also initiated a $93.5 million position during the quarter. The other funds with brand new NXPI positions are Matt Sirovich and Jeremy Mindich’s Scopia Capital, Bill Miller’s Miller Value Partners, and Leon Shaulov’s Maplelane Capital.

As you can see these stocks had an average of 34.5 hedge funds with bullish positions and the average amount invested in these stocks was $1720 million. That figure was $3942 million in NXPI’s case. Twitter Inc (NYSE:TWTR) is the most popular stock in this table. On the other hand PPG Industries, Inc. (NYSE:PPG) is the least popular one with only 27 bullish hedge fund positions. Compared to these stocks NXP Semiconductors NV (NASDAQ:NXPI) is more popular among hedge funds. Our calculations showed that top 20 most popular stocks among hedge funds returned 24.4% in 2019 through September 30th and outperformed the S&P 500 ETF (SPY) by 4 percentage points. Hedge funds were also right about betting on NXPI as the stock returned 12.2% during Q3 and outperformed the market by an even larger margin. Hedge funds were clearly right about piling into this stock relative to other stocks with similar market capitalizations.