Kellogg Company (NYSE:K) investors should pay attention to an increase in activity from the world’s largest hedge funds recently. Our calculations also showed that K isn’t among the 30 most popular stocks among hedge funds (view the video below).

Unlike some fund managers who are betting on Dow reaching 40000 in a year, our long-short investment strategy doesn’t rely on bull markets to deliver double digit returns. We only rely on hedge fund buy/sell signals. We’re going to take a peek at the fresh hedge fund action surrounding Kellogg Company (NYSE:K).

What does smart money think about Kellogg Company (NYSE:K)? 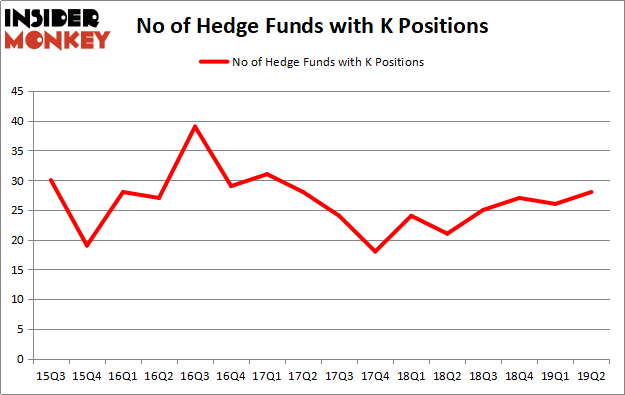 The largest stake in Kellogg Company (NYSE:K) was held by Renaissance Technologies, which reported holding $295.9 million worth of stock at the end of March. It was followed by Pzena Investment Management with a $53.2 million position. Other investors bullish on the company included Bridgewater Associates, Millennium Management, and GAMCO Investors.

As you can see these stocks had an average of 34 hedge funds with bullish positions and the average amount invested in these stocks was $1761 million. That figure was $529 million in K’s case. Vulcan Materials Company (NYSE:VMC) is the most popular stock in this table. On the other hand Shinhan Financial Group Co., Ltd. (NYSE:SHG) is the least popular one with only 5 bullish hedge fund positions. Kellogg Company (NYSE:K) is not the least popular stock in this group but hedge fund interest is still below average. Our calculations showed that top 20 most popular stocks among hedge funds returned 24.4% in 2019 through September 30th and outperformed the S&P 500 ETF (SPY) by 4 percentage points. A small number of hedge funds were also right about betting on K as the stock returned 21.2% during the same time frame and outperformed the market by an even larger margin.

Is Rogers Communications Inc. (RCI) A Good Stock To Buy?
Monthly Newsletter Strategy
Download a free copy of our newsletter and see the details inside!
Hedge Fund Resource Center
Related News
Here’s What Hedge Funds Think About Kellogg Company (K) Kellogg Company (K): Horizon Kinetics Explains Why The Wide Moat Franchise Has Failed to Grow Is Kellogg Company (NYSE:K) A Good Stock To Buy? Hedge Funds Are Crazy About Kellogg Company (K) Why Food Stocks May Spoil in Your Portfolio in 2018 The 15 Most Popular Snack Brands in the World 11 Most Popular Snacks In The World 10 Biggest Companies That Offer Pensions 15 Wealthiest Families in the World vs. First Generation Ultra Billionaires 5 Makeup Companies that Don’t Test on Animals
Billionaire Hedge Funds