We know that hedge funds generate strong, risk-adjusted returns over the long run, therefore imitating the picks that they are collectively bullish on can be a profitable strategy for retail investors. With billions of dollars in assets, smart money investors have to conduct complex analyses, spend many resources and use tools that are not always available for the general crowd. This doesn’t mean that they don’t have occasional colossal losses; they do (like Peltz’s recent General Electric losses). However, it is still a good idea to keep an eye on hedge fund activity. With this in mind, as the current round of 13F filings has just ended, let’s examine the smart money sentiment towards ITT Inc. (NYSE:ITT).

ITT Inc. (NYSE:ITT) was in 25 hedge funds’ portfolios at the end of June. ITT has seen an increase in hedge fund sentiment of late. There were 22 hedge funds in our database with ITT positions at the end of the previous quarter. Our calculations also showed that ITT isn’t among the 30 most popular stocks among hedge funds (view the video below).

According to most stock holders, hedge funds are perceived as unimportant, old financial tools of yesteryear. While there are more than 8000 funds trading at present, Our researchers choose to focus on the upper echelon of this group, around 750 funds. Most estimates calculate that this group of people watch over the lion’s share of all hedge funds’ total asset base, and by keeping track of their best stock picks, Insider Monkey has identified a few investment strategies that have historically surpassed the broader indices. Insider Monkey’s flagship hedge fund strategy exceeded the S&P 500 index by around 5 percentage points per annum since its inception in May 2014. We were able to generate large returns even by identifying short candidates. Our portfolio of short stocks lost 25.7% since February 2017 (through September 30th) even though the market was up more than 33% during the same period. We just shared a list of 10 short targets in our latest quarterly update . 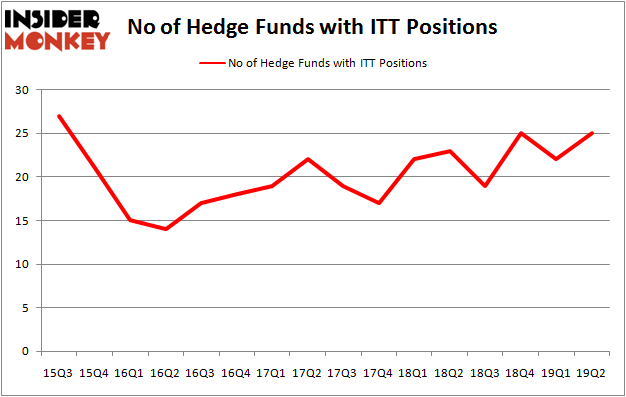 Unlike some fund managers who are betting on Dow reaching 40000 in a year, our long-short investment strategy doesn’t rely on bull markets to deliver double digit returns. We only rely on hedge fund buy/sell signals. Let’s check out the new hedge fund action surrounding ITT Inc. (NYSE:ITT).

What does smart money think about ITT Inc. (NYSE:ITT)?

Let’s now take a look at hedge fund activity in other stocks – not necessarily in the same industry as ITT Inc. (NYSE:ITT) but similarly valued. We will take a look at Casey’s General Stores, Inc. (NASDAQ:CASY), SolarWinds Corporation (NYSE:SWI), RealPage, Inc. (NASDAQ:RP), and Penumbra Inc (NYSE:PEN). This group of stocks’ market valuations are similar to ITT’s market valuation.

As you can see these stocks had an average of 23 hedge funds with bullish positions and the average amount invested in these stocks was $877 million. That figure was $595 million in ITT’s case. RealPage, Inc. (NASDAQ:RP) is the most popular stock in this table. On the other hand Casey’s General Stores, Inc. (NASDAQ:CASY) is the least popular one with only 18 bullish hedge fund positions. ITT Inc. (NYSE:ITT) is not the most popular stock in this group but hedge fund interest is still above average. This is a slightly positive signal but we’d rather spend our time researching stocks that hedge funds are piling on. Our calculations showed that top 20 most popular stocks among hedge funds returned 24.4% in 2019 through September 30th and outperformed the S&P 500 ETF (SPY) by 4 percentage points. Unfortunately ITT wasn’t nearly as popular as these 20 stocks and hedge funds that were betting on ITT were disappointed as the stock returned -6.3% during the third quarter and underperformed the market. If you are interested in investing in large cap stocks with huge upside potential, you should check out the top 20 most popular stocks among hedge funds as many of these stocks already outperformed the market so far this year.