In these volatile markets we scrutinize hedge fund filings to get a reading on which direction each stock might be going. Although the masses and most of the financial media blame hedge funds for their exorbitant fee structure and disappointing performance, these investors have proved to have great stock picking abilities over the years (that’s why their assets under management continue to swell). We believe hedge fund sentiment should serve as a crucial tool of an individual investor’s stock selection process, as it may offer great insights of how the brightest minds of the finance industry feel about specific stocks. After all, these people have access to smartest analysts and expensive data/information sources that individual investors can’t match. So should one consider investing in Incyte Corporation (NASDAQ:INCY)? The smart money sentiment can provide an answer to this question.

Is Incyte Corporation (NASDAQ:INCY) a buy, sell, or hold? Prominent investors are buying. The number of bullish hedge fund positions improved by 11 recently. Our calculations also showed that INCY isn’t among the 30 most popular stocks among hedge funds (click for Q4 rankings and see the video below for Q3 rankings). INCY was in 46 hedge funds’ portfolios at the end of December. There were 35 hedge funds in our database with INCY holdings at the end of the previous quarter.

We leave no stone unturned when looking for the next great investment idea. For example Europe is set to become the world’s largest cannabis market, so we check out this European marijuana stock pitch. We read hedge fund investor letters and listen to stock pitches at hedge fund conferences, and and go through short-term trade recommendations like this one. We even check out the recommendations of services with hard to believe track records. In January, we recommended a long position in one of the most shorted stocks in the market, and that stock returned more than 50% despite the large losses in the market since our recommendation. Now we’re going to take a gander at the fresh hedge fund action encompassing Incyte Corporation (NASDAQ:INCY).

What have hedge funds been doing with Incyte Corporation (NASDAQ:INCY)?

At the end of the fourth quarter, a total of 46 of the hedge funds tracked by Insider Monkey were bullish on this stock, a change of 31% from the third quarter of 2019. On the other hand, there were a total of 34 hedge funds with a bullish position in INCY a year ago. With hedgies’ capital changing hands, there exists an “upper tier” of key hedge fund managers who were adding to their stakes meaningfully (or already accumulated large positions). 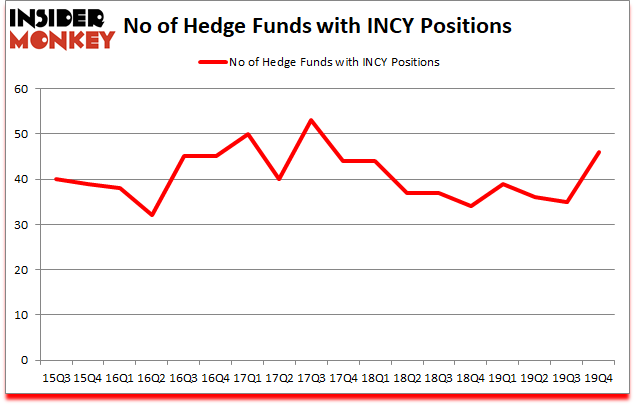 According to Insider Monkey’s hedge fund database, Julian Baker and Felix Baker’s Baker Bros. Advisors has the most valuable position in Incyte Corporation (NASDAQ:INCY), worth close to $2.7922 billion, amounting to 14.8% of its total 13F portfolio. On Baker Bros. Advisors’s heels is Renaissance Technologies, holding a $314.4 million position; the fund has 0.2% of its 13F portfolio invested in the stock. Some other professional money managers with similar optimism contain David Goel and Paul Ferri’s Matrix Capital Management, Cliff Asness’s AQR Capital Management and John Overdeck and David Siegel’s Two Sigma Advisors. In terms of the portfolio weights assigned to each position Baker Bros. Advisors allocated the biggest weight to Incyte Corporation (NASDAQ:INCY), around 14.84% of its 13F portfolio. Matrix Capital Management is also relatively very bullish on the stock, setting aside 3.6 percent of its 13F equity portfolio to INCY.

As industrywide interest jumped, specific money managers have jumped into Incyte Corporation (NASDAQ:INCY) headfirst. Woodline Partners, managed by Michael Rockefeller and Karl Kroeker, established the largest position in Incyte Corporation (NASDAQ:INCY). Woodline Partners had $18.9 million invested in the company at the end of the quarter. Philip Hempleman’s Ardsley Partners also made a $6.5 million investment in the stock during the quarter. The following funds were also among the new INCY investors: Samuel Isaly’s OrbiMed Advisors, Steve Cohen’s Point72 Asset Management, and Benjamin A. Smith’s Laurion Capital Management.

As you can see these stocks had an average of 41 hedge funds with bullish positions and the average amount invested in these stocks was $1584 million. That figure was $3966 million in INCY’s case. Sea Limited (NYSE:SE) is the most popular stock in this table. On the other hand Alexandria Real Estate Equities Inc (NYSE:ARE) is the least popular one with only 21 bullish hedge fund positions. Incyte Corporation (NASDAQ:INCY) is not the most popular stock in this group but hedge fund interest is still above average. This is a slightly positive signal but we’d rather spend our time researching stocks that hedge funds are piling on. Our calculations showed that top 20 most popular stocks among hedge funds returned 41.3% in 2019 and outperformed the S&P 500 ETF (SPY) by 10.1 percentage points. These stocks lost 12.9% in 2020 through March 9th but beat the market by 1.9 percentage points. Unfortunately INCY wasn’t nearly as popular as these 20 stocks and hedge funds that were betting on INCY were disappointed as the stock returned -18.6% during the same time period and underperformed the market. If you are interested in investing in large cap stocks with huge upside potential, you should check out the top 20 most popular stocks among hedge funds as many of these stocks already outperformed the market so far this year.