Hedge Funds Are Buying Everest Re Group Ltd (RE)

We can judge whether Everest Re Group Ltd (NYSE:RE) is a good investment right now by following the lead of some of the best investors in the world and piggybacking their ideas. There’s no better way to get these firms’ immense resources and analytical capabilities working for us than to follow their lead into their best ideas. While not all of these picks will be winners, our research shows that these picks historically outperformed the market when we factor in known risk factors.

Everest Re Group Ltd (NYSE:RE) investors should be aware of an increase in enthusiasm from smart money in recent months. Our calculations also showed that RE isn’t among the 30 most popular stocks among hedge funds (see the video below).

Unlike this former hedge fund manager who is convinced Dow will soar past 40000, our long-short investment strategy doesn’t rely on bull markets to deliver double digit returns. We only rely on hedge fund buy/sell signals. Let’s take a gander at the key hedge fund action regarding Everest Re Group Ltd (NYSE:RE).

How have hedgies been trading Everest Re Group Ltd (NYSE:RE)?

At the end of the second quarter, a total of 23 of the hedge funds tracked by Insider Monkey were bullish on this stock, a change of 21% from the previous quarter. By comparison, 20 hedge funds held shares or bullish call options in RE a year ago. With hedgies’ capital changing hands, there exists a select group of noteworthy hedge fund managers who were adding to their stakes substantially (or already accumulated large positions). 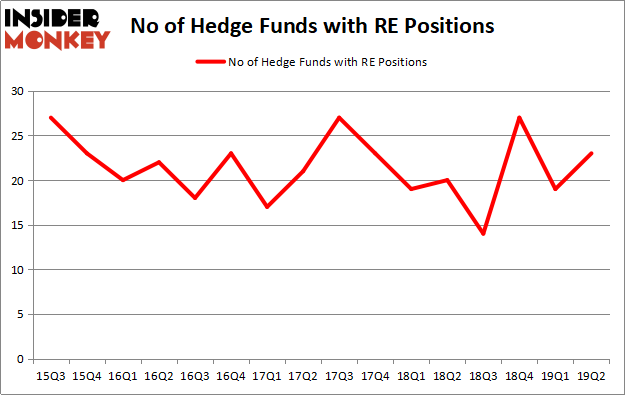 When looking at the institutional investors followed by Insider Monkey, AQR Capital Management, managed by Cliff Asness, holds the largest position in Everest Re Group Ltd (NYSE:RE). AQR Capital Management has a $312.6 million position in the stock, comprising 0.3% of its 13F portfolio. Sitting at the No. 2 spot is Citadel Investment Group, led by Ken Griffin, holding a $67.3 million position; less than 0.1%% of its 13F portfolio is allocated to the stock. Some other professional money managers with similar optimism include Brian Ashford-Russell and Tim Woolley’s Polar Capital, Noam Gottesman’s GLG Partners and Israel Englander’s Millennium Management.

Let’s now take a look at hedge fund activity in other stocks – not necessarily in the same industry as Everest Re Group Ltd (NYSE:RE) but similarly valued. These stocks are Avery Dennison Corporation (NYSE:AVY), Under Armour Inc (NYSE:UA), Shaw Communications Inc (NYSE:SJR), and Teledyne Technologies Incorporated (NYSE:TDY). This group of stocks’ market caps are closest to RE’s market cap.

As you can see these stocks had an average of 24.25 hedge funds with bullish positions and the average amount invested in these stocks was $564 million. That figure was $625 million in RE’s case. Under Armour Inc (NYSE:UA) is the most popular stock in this table. On the other hand Shaw Communications Inc (NYSE:SJR) is the least popular one with only 12 bullish hedge fund positions. Everest Re Group Ltd (NYSE:RE) is not the least popular stock in this group but hedge fund interest is still below average. Our calculations showed that top 20 most popular stocks among hedge funds returned 24.4% in 2019 through September 30th and outperformed the S&P 500 ETF (SPY) by 4 percentage points. A small number of hedge funds were also right about betting on RE as the stock returned 8.3% during the same time frame and outperformed the market by an even larger margin.