CF Industries Holdings, Inc. (NYSE:CF) was in 33 hedge funds’ portfolios at the end of the third quarter of 2018. CF has seen an increase in enthusiasm from smart money lately. There were 30 hedge funds in our database with CF holdings at the end of the previous quarter. Our calculations also showed that CF isn’t among the 30 most popular stocks among hedge funds.

What have hedge funds been doing with CF Industries Holdings, Inc. (NYSE:CF)?

At the end of the third quarter, a total of 33 of the hedge funds tracked by Insider Monkey held long positions in this stock, a change of 10% from one quarter earlier. By comparison, 31 hedge funds held shares or bullish call options in CF heading into this year. With hedgies’ capital changing hands, there exists a select group of key hedge fund managers who were upping their holdings significantly (or already accumulated large positions). 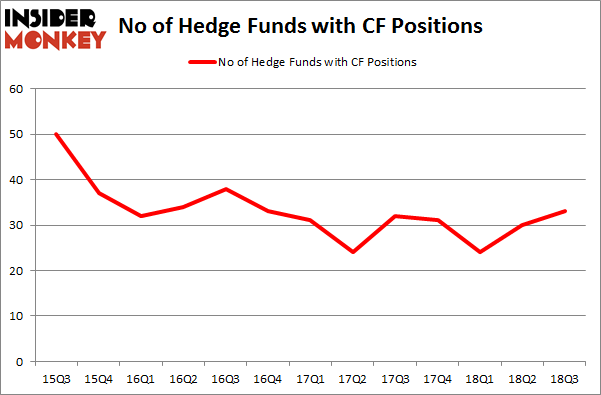 More specifically, Eminence Capital was the largest shareholder of CF Industries Holdings, Inc. (NYSE:CF), with a stake worth $214.5 million reported as of the end of September. Trailing Eminence Capital was Platinum Asset Management, which amassed a stake valued at $145.5 million. Millennium Management, Slate Path Capital, and Glendon Capital Management were also very fond of the stock, giving the stock large weights in their portfolios.

Now, key money managers were leading the bulls’ herd. Pelham Capital, managed by Ross Turner, established the most valuable call position in CF Industries Holdings, Inc. (NYSE:CF). Pelham Capital had $27.2 million invested in the company at the end of the quarter. George Soros’s Soros Fund Management also made a $16.3 million investment in the stock during the quarter. The other funds with new positions in the stock are Paul Marshall and Ian Wace’s Marshall Wace LLP, Vince Maddi and Shawn Brennan’s SIR Capital Management, and William Harnisch’s Peconic Partners LLC.

As you can see these stocks had an average of 22 hedge funds with bullish positions and the average amount invested in these stocks was $1.26 billion. That figure was $1.16 billion in CF’s case. Chipotle Mexican Grill, Inc. (NYSE:CMG) is the most popular stock in this table. On the other hand Telecom Italia S.p.A. (NYSE:TI) is the least popular one with only 3 bullish hedge fund positions. CF Industries Holdings, Inc. (NYSE:CF) is not the most popular stock in this group but hedge fund interest is still above average. This is a slightly positive signal but we’d rather spend our time researching stocks that hedge funds are piling on. In this regard CMG might be a better candidate to consider a long position.