Hedge Funds Are Betting On The Bank of Nova Scotia (BNS)

If you’d ask most traders, hedge funds are perceived as worthless, outdated investment vehicles of yesteryear. While there are over 8000 funds trading at the moment, We hone in on the upper echelon of this club, around 750 funds. These investment experts preside over most of the smart money’s total capital, and by watching their highest performing investments, Insider Monkey has found a few investment strategies that have historically outrun Mr. Market. Insider Monkey’s flagship hedge fund strategy outstripped the S&P 500 index by around 5 percentage points per annum since its inception in May 2014. We were able to generate large returns even by identifying short candidates. Our portfolio of short stocks lost 25.7% since February 2017 (through September 30th) even though the market was up more than 33% during the same period. We just shared a list of 10 short targets in our latest quarterly update .

Unlike some fund managers who are betting on Dow reaching 40000 in a year, our long-short investment strategy doesn’t rely on bull markets to deliver double digit returns. We only rely on hedge fund buy/sell signals. We’re going to check out the recent hedge fund action surrounding The Bank of Nova Scotia (NYSE:BNS).

What have hedge funds been doing with The Bank of Nova Scotia (NYSE:BNS)?

Heading into the third quarter of 2019, a total of 16 of the hedge funds tracked by Insider Monkey held long positions in this stock, a change of 14% from the previous quarter. Below, you can check out the change in hedge fund sentiment towards BNS over the last 16 quarters. So, let’s find out which hedge funds were among the top holders of the stock and which hedge funds were making big moves. 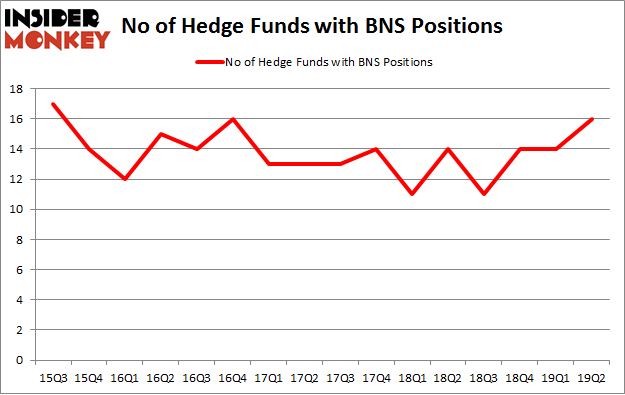 More specifically, Renaissance Technologies was the largest shareholder of The Bank of Nova Scotia (NYSE:BNS), with a stake worth $231.9 million reported as of the end of March. Trailing Renaissance Technologies was Citadel Investment Group, which amassed a stake valued at $196.5 million. GLG Partners, Bridgewater Associates, and D E Shaw were also very fond of the stock, giving the stock large weights in their portfolios.

Now, key money managers were breaking ground themselves. Balyasny Asset Management, managed by Dmitry Balyasny, assembled the largest position in The Bank of Nova Scotia (NYSE:BNS). Balyasny Asset Management had $12.6 million invested in the company at the end of the quarter. Benjamin A. Smith’s Laurion Capital Management also initiated a $1.3 million position during the quarter. The other funds with new positions in the stock are Alec Litowitz and Ross Laser’s Magnetar Capital, Minhua Zhang’s Weld Capital Management, and David Andre and Astro Teller’s Cerebellum Capital.

Let’s now review hedge fund activity in other stocks – not necessarily in the same industry as The Bank of Nova Scotia (NYSE:BNS) but similarly valued. We will take a look at Duke Energy Corporation (NYSE:DUK), T-Mobile US, Inc. (NASDAQ:TMUS), The TJX Companies, Inc. (NYSE:TJX), and Enterprise Products Partners L.P. (NYSE:EPD). This group of stocks’ market values are similar to BNS’s market value.

As you can see these stocks had an average of 44.75 hedge funds with bullish positions and the average amount invested in these stocks was $1731 million. That figure was $537 million in BNS’s case. T-Mobile US, Inc. (NASDAQ:TMUS) is the most popular stock in this table. On the other hand Enterprise Products Partners L.P. (NYSE:EPD) is the least popular one with only 19 bullish hedge fund positions. Compared to these stocks The Bank of Nova Scotia (NYSE:BNS) is even less popular than EPD. Hedge funds clearly dropped the ball on BNS as the stock delivered strong returns, though hedge funds’ consensus picks still generated respectable returns. Our calculations showed that top 20 most popular stocks among hedge funds returned 24.4% in 2019 through September 30th and outperformed the S&P 500 ETF (SPY) by 4 percentage points. Hedge funds were also right about betting on BNS as the stock returned 5.8% during the third quarter and outperformed the market by an even larger margin.