It was a rough fourth quarter for many hedge funds, which were naturally unable to overcome the big dip in the broad market, as the S&P 500 fell by about 4.8% during 2018 and average hedge fund losing about 1%. The Russell 2000, composed of smaller companies, performed even worse, trailing the S&P by more than 6 percentage points, as investors fled less-known quantities for safe havens. Luckily hedge funds were shifting their holdings into large-cap stocks. The 20 most popular hedge fund stocks actually generated an average return of 24.4% during the first 9 months of 2019 and outperformed the S&P 500 ETF by 4 percentage points. We are done processing the latest 13f filings and in this article we will study how hedge fund sentiment towards SLM Corp (NASDAQ:SLM) changed during the first quarter.

SLM Corp (NASDAQ:SLM) was in 32 hedge funds’ portfolios at the end of June. SLM has seen an increase in hedge fund interest recently. There were 29 hedge funds in our database with SLM positions at the end of the previous quarter. Our calculations also showed that SLM isn’t among the 30 most popular stocks among hedge funds (view the video below).

If you’d ask most traders, hedge funds are viewed as slow, old investment vehicles of yesteryear. While there are more than 8000 funds trading today, Our experts hone in on the top tier of this club, around 750 funds. It is estimated that this group of investors oversee bulk of the hedge fund industry’s total capital, and by observing their matchless equity investments, Insider Monkey has identified several investment strategies that have historically outpaced the market. Insider Monkey’s flagship hedge fund strategy outperformed the S&P 500 index by around 5 percentage points per annum since its inception in May 2014. We were able to generate large returns even by identifying short candidates. Our portfolio of short stocks lost 25.7% since February 2017 (through September 30th) even though the market was up more than 33% during the same period. We just shared a list of 10 short targets in our latest quarterly update . 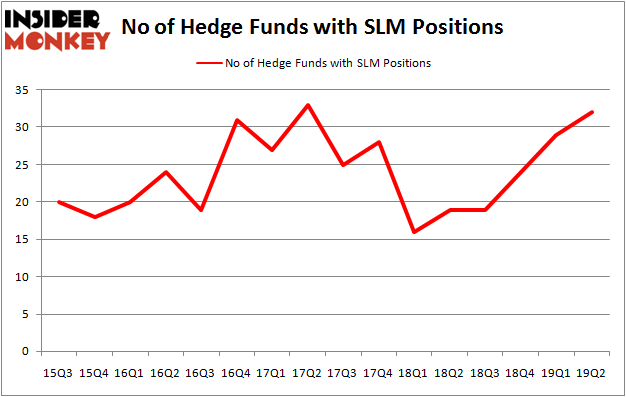 What have hedge funds been doing with SLM Corp (NASDAQ:SLM)?

When looking at the institutional investors followed by Insider Monkey, ValueAct Capital, managed by Jeffrey Ubben, holds the most valuable position in SLM Corp (NASDAQ:SLM). ValueAct Capital has a $380.9 million position in the stock, comprising 4% of its 13F portfolio. The second most bullish fund manager is Renaissance Technologies, holding a $31.8 million position; the fund has less than 0.1%% of its 13F portfolio invested in the stock. Remaining hedge funds and institutional investors that are bullish contain Peter Rathjens, Bruce Clarke and John Campbell’s Arrowstreet Capital, Ken Griffin’s Citadel Investment Group and D. E. Shaw’s D E Shaw.

As industrywide interest jumped, some big names were leading the bulls’ herd. Alyeska Investment Group, managed by Anand Parekh, established the largest position in SLM Corp (NASDAQ:SLM). Alyeska Investment Group had $8.3 million invested in the company at the end of the quarter. Michael Kharitonov and Jon David McAuliffe’s Voleon Capital also made a $1.1 million investment in the stock during the quarter. The other funds with brand new SLM positions are David Andre and Astro Teller’s Cerebellum Capital, Minhua Zhang’s Weld Capital Management, and George Zweig, Shane Haas and Ravi Chander’s Signition LP.

As you can see these stocks had an average of 13.75 hedge funds with bullish positions and the average amount invested in these stocks was $187 million. That figure was $607 million in SLM’s case. Brighthouse Financial, Inc. (NASDAQ:BHF) is the most popular stock in this table. On the other hand RBC Bearings Incorporated (NASDAQ:ROLL) is the least popular one with only 6 bullish hedge fund positions. Compared to these stocks SLM Corp (NASDAQ:SLM) is more popular among hedge funds. Our calculations showed that top 20 most popular stocks among hedge funds returned 24.4% in 2019 through September 30th and outperformed the S&P 500 ETF (SPY) by 4 percentage points. Unfortunately SLM wasn’t nearly as popular as these 20 stocks and hedge funds that were betting on SLM were disappointed as the stock returned -8.9% during the third quarter and underperformed the market. If you are interested in investing in large cap stocks with huge upside potential, you should check out the top 20 most popular stocks among hedge funds as many of these stocks already outperformed the market in Q3.