Were Hedge Funds Right About Flocking Into SLM Corp (SLM) ?

SLM Corp (NASDAQ:SLM) was in 29 hedge funds’ portfolios at the end of March. SLM has seen an increase in hedge fund interest recently. There were 24 hedge funds in our database with SLM positions at the end of the previous quarter. Our calculations also showed that slm isn’t among the 30 most popular stocks among hedge funds. 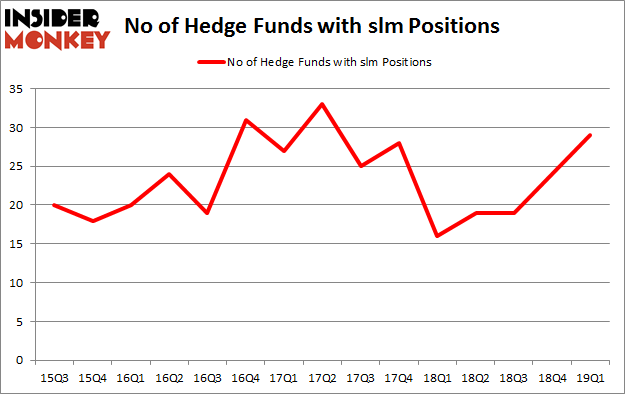 Among these funds, ValueAct Capital held the most valuable stake in SLM Corp (NASDAQ:SLM), which was worth $388.3 million at the end of the first quarter. On the second spot was Renaissance Technologies which amassed $29.1 million worth of shares. Moreover, Portolan Capital Management, Carlson Capital, and Arrowstreet Capital were also bullish on SLM Corp (NASDAQ:SLM), allocating a large percentage of their portfolios to this stock.

With a general bullishness amongst the heavyweights, key money managers have been driving this bullishness. Shellback Capital, managed by Doug Gordon, Jon Hilsabeck and Don Jabro, established the biggest position in SLM Corp (NASDAQ:SLM). Shellback Capital had $10.1 million invested in the company at the end of the quarter. Andrew Feldstein and Stephen Siderow’s Blue Mountain Capital also made a $3.3 million investment in the stock during the quarter. The other funds with brand new SLM positions are Dmitry Balyasny’s Balyasny Asset Management, Noam Gottesman’s GLG Partners, and Joel Greenblatt’s Gotham Asset Management.

As you can see these stocks had an average of 23.25 hedge funds with bullish positions and the average amount invested in these stocks was $449 million. That figure was $576 million in SLM’s case. Spark Therapeutics Inc (NASDAQ:ONCE) is the most popular stock in this table. On the other hand Hospitality Properties Trust (NASDAQ:HPT) is the least popular one with only 11 bullish hedge fund positions. SLM Corp (NASDAQ:SLM) is not the most popular stock in this group but hedge fund interest is still above average. Our calculations showed that top 20 most popular stocks among hedge funds returned 1.9% in Q2 through May 30th and outperformed the S&P 500 ETF (SPY) by more than 3 percentage points. Hedge funds were also right about betting on SLM, though not to the same extent, as the stock returned -1.1% during the same time frame and outperformed the market as well.