A whopping number of 13F filings filed with U.S. Securities and Exchange Commission has been processed by Insider Monkey so that individual investors can look at the overall hedge fund sentiment towards the stocks included in their watchlists. These freshly-submitted public filings disclose money managers’ equity positions as of the end of the three-month period that ended September 30, so let’s proceed with the discussion of the hedge fund sentiment on ON Semiconductor Corporation (NASDAQ:ON).

ON Semiconductor Corporation (NASDAQ:ON) shareholders have witnessed an increase in enthusiasm from smart money lately. Our calculations also showed that ON isn’t among the 30 most popular stocks among hedge funds.

Today there are dozens of signals stock traders employ to grade their holdings. A pair of the less utilized signals are hedge fund and insider trading signals. Our researchers have shown that, historically, those who follow the top picks of the elite money managers can outpace the S&P 500 by a healthy amount (see the details here). 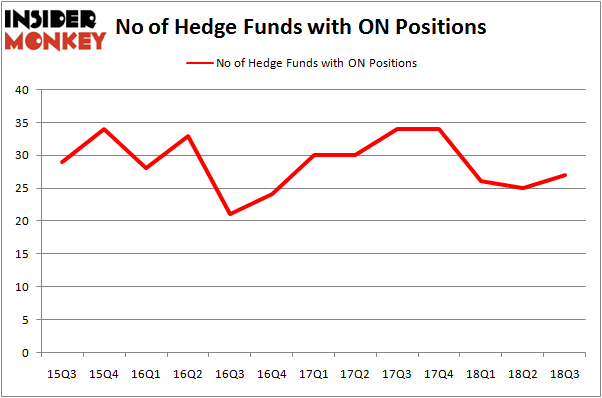 More specifically, Blue Harbour Group was the largest shareholder of ON Semiconductor Corporation (NASDAQ:ON), with a stake worth $124.8 million reported as of the end of September. Trailing Blue Harbour Group was AQR Capital Management, which amassed a stake valued at $72.1 million. Simcoe Capital Management, Citadel Investment Group, and Renaissance Technologies were also very fond of the stock, giving the stock large weights in their portfolios.

Consequently, some big names were breaking ground themselves. Renaissance Technologies, managed by Jim Simons, initiated the most outsized position in ON Semiconductor Corporation (NASDAQ:ON). Renaissance Technologies had $14.3 million invested in the company at the end of the quarter. Paul Marshall and Ian Wace’s Marshall Wace LLP also made a $2.8 million investment in the stock during the quarter. The other funds with new positions in the stock are David Costen Haley’s HBK Investments, Paul Tudor Jones’s Tudor Investment Corp, and Peter Rathjens, Bruce Clarke and John Campbell’s Arrowstreet Capital.

As you can see these stocks had an average of 23 hedge funds with bullish positions and the average amount invested in these stocks was $340 million. That figure was $337 million in ON’s case. Black Knight, Inc. (NYSE:BKI) is the most popular stock in this table. On the other hand Brookfield Property Partners LP (NYSE:BPY) is the least popular one with only 11 bullish hedge fund positions. ON Semiconductor Corporation (NASDAQ:ON) is not the most popular stock in this group but hedge fund interest is still above average. This is a slightly positive signal but we’d rather spend our time researching stocks that hedge funds are piling on. In this regard BKI might be a better candidate to consider a long position.