How do we determine whether MGIC Investment Corporation (NYSE:MTG) makes for a good investment at the moment? We analyze the sentiment of a select group of the very best investors in the world, who spend immense amounts of time and resources studying companies. They may not always be right (no one is), but data shows that their consensus long positions have historically outperformed the market when we adjust for known risk factors.

Is MGIC Investment Corporation (NYSE:MTG) a worthy investment right now? Hedge funds are in a bullish mood. The number of bullish hedge fund positions advanced by 4 lately. Our calculations also showed that MTG isn’t among the 30 most popular stocks among hedge funds (click for Q3 rankings and see the video below for Q2 rankings).

Unlike the largest US hedge funds that are convinced Dow will soar past 40,000 or the world’s most bearish hedge fund that’s more convinced than ever that a crash is coming, our long-short investment strategy doesn’t rely on bull or bear markets to deliver double digit returns. We only rely on the best performing hedge funds‘ buy/sell signals. We’re going to analyze the latest hedge fund action surrounding MGIC Investment Corporation (NYSE:MTG).

What does smart money think about MGIC Investment Corporation (NYSE:MTG)?

At Q3’s end, a total of 39 of the hedge funds tracked by Insider Monkey held long positions in this stock, a change of 11% from the previous quarter. The graph below displays the number of hedge funds with bullish position in MTG over the last 17 quarters. With hedge funds’ capital changing hands, there exists a few key hedge fund managers who were boosting their holdings considerably (or already accumulated large positions). 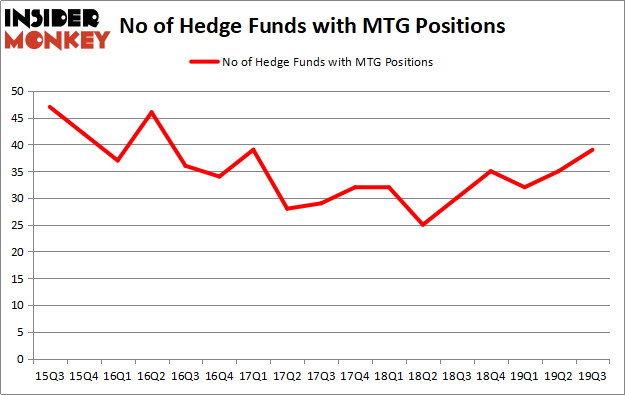 More specifically, Point72 Asset Management was the largest shareholder of MGIC Investment Corporation (NYSE:MTG), with a stake worth $100.9 million reported as of the end of September. Trailing Point72 Asset Management was AQR Capital Management, which amassed a stake valued at $84.8 million. Renaissance Technologies, GLG Partners, and Millennium Management were also very fond of the stock, becoming one of the largest hedge fund holders of the company. In terms of the portfolio weights assigned to each position Almitas Capital allocated the biggest weight to MGIC Investment Corporation (NYSE:MTG), around 2.04% of its portfolio. Factorial Partners is also relatively very bullish on the stock, dishing out 1.75 percent of its 13F equity portfolio to MTG.

Consequently, some big names have been driving this bullishness. Marshall Wace, managed by Paul Marshall and Ian Wace, established the most valuable position in MGIC Investment Corporation (NYSE:MTG). Marshall Wace had $20.2 million invested in the company at the end of the quarter. Gregg Moskowitz’s Interval Partners also initiated a $6.2 million position during the quarter. The following funds were also among the new MTG investors: Carl Goldsmith and Scott Klein’s Beach Point Capital Management, John Overdeck and David Siegel’s Two Sigma Advisors, and David Andre and Astro Teller’s Cerebellum Capital.

As you can see these stocks had an average of 17.25 hedge funds with bullish positions and the average amount invested in these stocks was $927 million. That figure was $566 million in MTG’s case. CVR Energy, Inc. (NYSE:CVI) is the most popular stock in this table. On the other hand Blackbaud, Inc. (NASDAQ:BLKB) is the least popular one with only 12 bullish hedge fund positions. Compared to these stocks MGIC Investment Corporation (NYSE:MTG) is more popular among hedge funds. Our calculations showed that top 20 most popular stocks among hedge funds returned 37.4% in 2019 through the end of November and outperformed the S&P 500 ETF (SPY) by 9.9 percentage points. Hedge funds were also right about betting on MTG as the stock returned 15% during the first two months of Q4 and outperformed the market by an even larger margin. Hedge funds were clearly right about piling into this stock relative to other stocks with similar market capitalizations.