Out of thousands of stocks that are currently traded on the market, it is difficult to identify those that will really generate strong returns. Hedge funds and institutional investors spend millions of dollars on analysts with MBAs and PhDs, who are industry experts and well connected to other industry and media insiders on top of that. Individual investors can piggyback the hedge funds employing these talents and can benefit from their vast resources and knowledge in that way. We analyze quarterly 13F filings of nearly 750 hedge funds and, by looking at the smart money sentiment that surrounds a stock, we can determine whether it has the potential to beat the market over the long-term. Therefore, let’s take a closer look at what smart money thinks about CURO Group Holdings Corp. (NYSE:CURO).

Is CURO Group Holdings Corp. (NYSE:CURO) the right pick for your portfolio? Money managers are taking an optimistic view. The number of long hedge fund bets went up by 3 in recent months. Our calculations also showed that CURO isn’t among the 30 most popular stocks among hedge funds (click for Q3 rankings and see the video below for Q2 rankings). CURO was in 16 hedge funds’ portfolios at the end of September. There were 13 hedge funds in our database with CURO positions at the end of the previous quarter.

We leave no stone unturned when looking for the next great investment idea. For example Europe is set to become the world’s largest cannabis market, so we check out this European marijuana stock pitch. One of the most bullish analysts in America just put his money where his mouth is. He says, “I’m investing more today than I did back in early 2009.” So we check out his pitch. We read hedge fund investor letters and listen to stock pitches at hedge fund conferences. We also rely on the best performing hedge funds‘ buy/sell signals. Let’s take a look at the new hedge fund action regarding CURO Group Holdings Corp. (NYSE:CURO).

What have hedge funds been doing with CURO Group Holdings Corp. (NYSE:CURO)?

At the end of the third quarter, a total of 16 of the hedge funds tracked by Insider Monkey held long positions in this stock, a change of 23% from the second quarter of 2019. The graph below displays the number of hedge funds with bullish position in CURO over the last 17 quarters. With hedgies’ positions undergoing their usual ebb and flow, there exists a select group of notable hedge fund managers who were upping their stakes substantially (or already accumulated large positions). 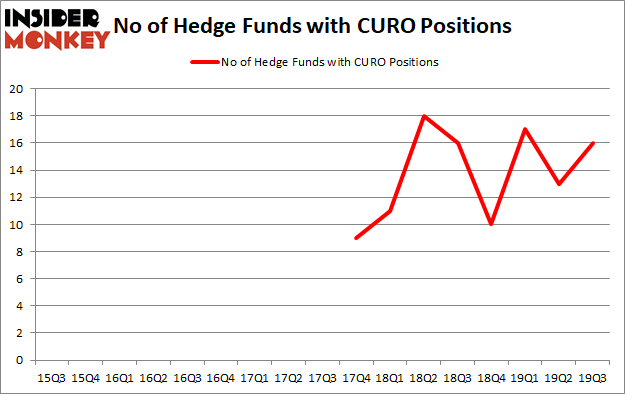 Of the funds tracked by Insider Monkey, Second Curve Capital, managed by Tom Brown, holds the number one position in CURO Group Holdings Corp. (NYSE:CURO). Second Curve Capital has a $17.9 million position in the stock, comprising 10.9% of its 13F portfolio. Coming in second is Empyrean Capital Partners, led by Michael A. Price and Amos Meron, holding a $17.2 million position; 0.9% of its 13F portfolio is allocated to the company. Remaining professional money managers with similar optimism consist of Wilmot B. Harkey and Daniel Mack’s Nantahala Capital Management, Phil Frohlich’s Prescott Group Capital Management and Matthew Barrett’s Glendon Capital Management. In terms of the portfolio weights assigned to each position Second Curve Capital allocated the biggest weight to CURO Group Holdings Corp. (NYSE:CURO), around 10.93% of its 13F portfolio. Prescott Group Capital Management is also relatively very bullish on the stock, earmarking 3.29 percent of its 13F equity portfolio to CURO.

As industrywide interest jumped, some big names have been driving this bullishness. Interval Partners, managed by Gregg Moskowitz, assembled the biggest position in CURO Group Holdings Corp. (NYSE:CURO). Interval Partners had $1.9 million invested in the company at the end of the quarter. Matthew Hulsizer’s PEAK6 Capital Management also initiated a $0.4 million position during the quarter. The other funds with new positions in the stock are Renaissance Technologies, Michael Gelband’s ExodusPoint Capital, and Mike Vranos’s Ellington.

As you can see these stocks had an average of 11.25 hedge funds with bullish positions and the average amount invested in these stocks was $90 million. That figure was $90 million in CURO’s case. Laredo Petroleum Inc (NYSE:LPI) is the most popular stock in this table. On the other hand Revance Therapeutics Inc (NASDAQ:RVNC) is the least popular one with only 6 bullish hedge fund positions. Compared to these stocks CURO Group Holdings Corp. (NYSE:CURO) is more popular among hedge funds. Our calculations showed that top 20 most popular stocks among hedge funds returned 37.4% in 2019 through the end of November and outperformed the S&P 500 ETF (SPY) by 9.9 percentage points. Unfortunately CURO wasn’t nearly as popular as these 20 stocks and hedge funds that were betting on CURO were disappointed as the stock returned 2.5% during the first two months of the fourth quarter and underperformed the market. If you are interested in investing in large cap stocks with huge upside potential, you should check out the top 20 most popular stocks among hedge funds as 70 percent of these stocks already outperformed the market in Q4.