Is Bristol Myers Squibb Co. (BMY) A Good Stock To Buy According To Hedge Funds?

A whopping number of 13F filings filed with U.S. Securities and Exchange Commission has been processed by Insider Monkey so that individual investors can look at the overall hedge fund sentiment towards the stocks included in their watchlists. These freshly-submitted public filings disclose money managers’ equity positions as of the end of the three-month period that ended September 30, so let’s proceed with the discussion of the hedge fund sentiment on Bristol Myers Squibb Co. (NYSE:BMY), one of the 10 Biggest Antidepressant Drug Companies.

There was a slight rise in Bristol Myers Squibb Co. (NYSE:BMY) ownership among hedge funds during Q3, though it came after three quarters of hedge fund selling. Overall, there are still 31% fewer hedge fund shareholders of the stock as of September 30 than there were a year earlier, which should be concerning to anyone interested in BMY. Because of the declining ownership over the past year, Bristol Myers didn’t come close to ranking among the 30 Most Popular Stocks Among Hedge Funds, though it was able to pull out a 3rd place finish among the 20 Dividend Stocks That Billionaires Are Piling On.

What have hedge funds been doing with Bristol Myers Squibb Co. (NYSE:BMY)?

At the end of the third quarter, a total of 48 of the hedge funds tracked by Insider Monkey held long positions in this stock, a 7% increase from the previous quarter. On the other hand, there were a total of 66 hedge funds with a bullish position in BMY at the beginning of this year. With the smart money’s positions undergoing their usual ebb and flow, there exists a select group of noteworthy hedge fund managers who were upping their holdings meaningfully (or already accumulated large positions). 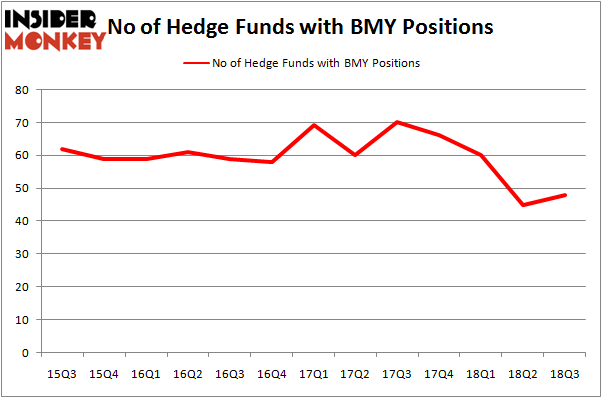 More specifically, Arrowstreet Capital was the largest shareholder of Bristol Myers Squibb Co. (NYSE:BMY), with a stake worth $898 million reported as of the end of September. Trailing Arrowstreet Capital was D E Shaw, which amassed a stake valued at $734.5 million. Renaissance Technologies, AQR Capital Management, and Citadel Investment Group were also very fond of the stock, giving the stock large weights in their portfolios.

As you can see these stocks had an average of 34 hedge funds with bullish positions and the average amount invested in these stocks was $1.91 billion. That figure was $4.05 billion in BMY’s case. Gilead Sciences, Inc. (NASDAQ:GILD) is the most popular stock in this table. On the other hand GlaxoSmithKline plc (NYSE:GSK) is the least popular one with only 24 bullish hedge fund positions. Bristol Myers Squibb Co. (NYSE:BMY) is not the most popular stock in this group but hedge fund interest is still above average. This is a slightly positive signal but we’d rather spend our time researching stocks that hedge funds haven’t been selling so much recently.