Investing in hedge funds can bring large profits, but it’s not for everybody, since hedge funds are available only for high-net-worth individuals. They generate significant returns for investors to justify their large fees and they allocate a lot of time and employ complex research processes to determine the best stocks to invest in. A particularly interesting group of stocks that hedge funds like is the small-caps. The huge amount of capital does not allow hedge funds to invest a lot in small-caps, but our research showed that their most popular small-cap ideas are less efficiently priced and generate stronger returns than their large- and mega-cap picks and the broader market. That is why we pay special attention to the hedge fund activity in the small-cap space. Nevertheless, it is also possible to find underpriced large-cap stocks by following the hedge funds’ moves. In this article, we look at what those funds think of CIT Group Inc. (NYSE:CIT) based on that data.

CIT Group Inc. (NYSE:CIT) investors should pay attention to an increase in enthusiasm from smart money of late. CIT was in 27 hedge funds’ portfolios at the end of September. There were 25 hedge funds in our database with CIT positions at the end of the previous quarter. Our calculations also showed that CIT isn’t among the 30 most popular stocks among hedge funds (click for Q3 rankings and see the video at the end of this article for Q2 rankings).

If you’d ask most traders, hedge funds are perceived as underperforming, outdated investment vehicles of years past. While there are over 8000 funds with their doors open at present, Our experts hone in on the top tier of this club, around 750 funds. It is estimated that this group of investors administer bulk of the smart money’s total asset base, and by shadowing their first-class investments, Insider Monkey has deciphered numerous investment strategies that have historically beaten the broader indices. Insider Monkey’s flagship short hedge fund strategy beat the S&P 500 short ETFs by around 20 percentage points a year since its inception in May 2014. Our portfolio of short stocks lost 27.8% since February 2017 (through November 21st) even though the market was up more than 39% during the same period. We just shared a list of 7 short targets in our latest quarterly update .

We leave no stone unturned when looking for the next great investment idea. For example Europe is set to become the world’s largest cannabis market, so we check out this European marijuana stock pitch. We read hedge fund investor letters and listen to stock pitches at hedge fund conferences. This December, we recommended Adams Energy as a one-way bet based on an under-the-radar fund manager’s investor letter and the stock is still extremely cheap despite already gaining 20 percent. Keeping this in mind let’s take a glance at the new hedge fund action surrounding CIT Group Inc. (NYSE:CIT).

What have hedge funds been doing with CIT Group Inc. (NYSE:CIT)?

At the end of the third quarter, a total of 27 of the hedge funds tracked by Insider Monkey were long this stock, a change of 8% from the previous quarter. On the other hand, there were a total of 25 hedge funds with a bullish position in CIT a year ago. With hedge funds’ sentiment swirling, there exists an “upper tier” of noteworthy hedge fund managers who were upping their stakes meaningfully (or already accumulated large positions). 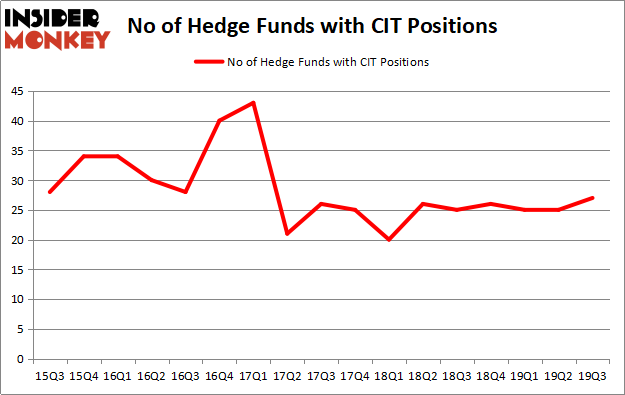 Of the funds tracked by Insider Monkey, First Pacific Advisors, managed by Robert Rodriguez and Steven Romick, holds the number one position in CIT Group Inc. (NYSE:CIT). First Pacific Advisors has a $394.4 million position in the stock, comprising 3.7% of its 13F portfolio. Sitting at the No. 2 spot is Anthony Bozza of Lakewood Capital Management, with a $134 million position; the fund has 4.6% of its 13F portfolio invested in the stock. Remaining professional money managers that hold long positions consist of Peter Rathjens, Bruce Clarke and John Campbell’s Arrowstreet Capital, Jeffrey Altman’s Owl Creek Asset Management and Cliff Asness’s AQR Capital Management. In terms of the portfolio weights assigned to each position Lakewood Capital Management allocated the biggest weight to CIT Group Inc. (NYSE:CIT), around 4.57% of its 13F portfolio. MFP Investors is also relatively very bullish on the stock, setting aside 3.88 percent of its 13F equity portfolio to CIT.

As you can see these stocks had an average of 21.75 hedge funds with bullish positions and the average amount invested in these stocks was $396 million. That figure was $810 million in CIT’s case. Six Flags Entertainment Corporation (NYSE:SIX) is the most popular stock in this table. On the other hand LG Display Co Ltd. (NYSE:LPL) is the least popular one with only 3 bullish hedge fund positions. CIT Group Inc. (NYSE:CIT) is not the most popular stock in this group but hedge fund interest is still above average. This is a slightly positive signal but we’d rather spend our time researching stocks that hedge funds are piling on. Our calculations showed that top 20 most popular stocks among hedge funds returned 41.3% in 2019 and outperformed the S&P 500 ETF (SPY) by 10.1 percentage points. Unfortunately CIT wasn’t nearly as popular as these 20 stocks and hedge funds that were betting on CIT were disappointed as the stock returned 22.6% in 2019 and trailed the market. If you are interested in investing in large cap stocks with huge upside potential, you should check out the top 20 most popular stocks among hedge funds as many of these stocks already outperformed the market so far this year.