China has loomed large in health care headlines recently, due to the GlaxoSmithKline plc (ADR) (NYSE:GSK) scandal that erupted in July. Glaxo, which generated almost 3% of its annual revenue from China last year, is at the center of a sweeping government probe regarding bribery and kickback allegations in the pharmaceutical industry. These allegations could seriously reduce the company’s future revenue growth in China, where pharmaceutical sales are expected to grow 15% to 18% annually through 2016, according to research firm IMS.

Getting older and richer every year
There are two main reasons that I believe that these three stocks will succeed: The Chinese population is aging, and middle-class incomes are increasing.

There are currently 194 million people over the age of 60 in China, and that number will more than double to 440 million by 2050. China’s emerging middle class will also be able to afford more premium health care services over the next decade. By 2022, according to McKinsey, 75% of Chinese urban customers will earn 60,000 to 229,000 RMB (approximately $9,000 to $34,000) annually, putting it in purchasing-power-parity terms between Brazil and Italy.

Stryker Corporation (NYSE:SYK)’s investment in Trauson matters because it allows the company to meet demand in both the higher and lower ends of the implant and device market. Stryker’s products are sold to upper-class hospitals in major cities. Trauson products, on the other hand, are mostly purchased by lower-income hospitals that cannot afford Stryker’s products. Therefore, the acquisition gives Stryker a comfortable presence in both developed and developing areas in China.

Last quarter, Stryker Corporation (NYSE:SYK) reported a 5.4% increase in U.S. sales to $1.46 billion as international sales climbed 4.2% to $754 million. Owning Trauson not only allows Stryker to continue growing in China, but also into other emerging markets without risking the premium appeal of its namesake brand. 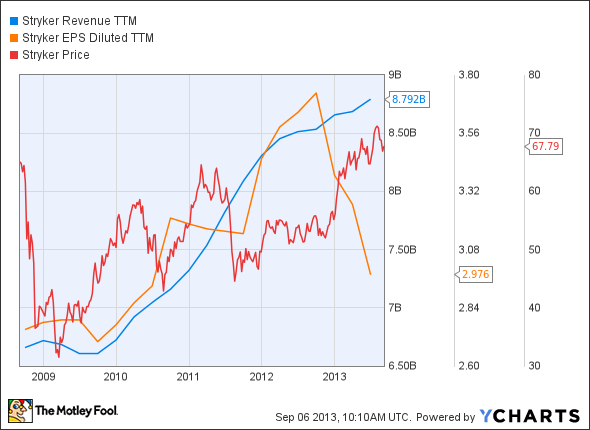 Investors have certainly taken notice of Stryker Corporation (NYSE:SYK)’s growth potential, sending shares up nearly 30% over the past 12 months, despite several safety recalls.

The rise of the robot surgeons
Over the past five years, Intuitive Surgical, Inc. (NASDAQ:ISRG)’s da Vinci robotic surgery system — which is used for minimally invasive prostatectomies, gynecologic procedures, and cardiac valve repair — has gained rapid adoption in the United States. Nearly one out of every four U.S. hospitals has one of the $1.45 million units installed. The system was used for nearly 400,000 surgeries in the United States in 2012. As a result, Intuitive Surgical’s revenue and earnings have soared by triple digits over the past five years. 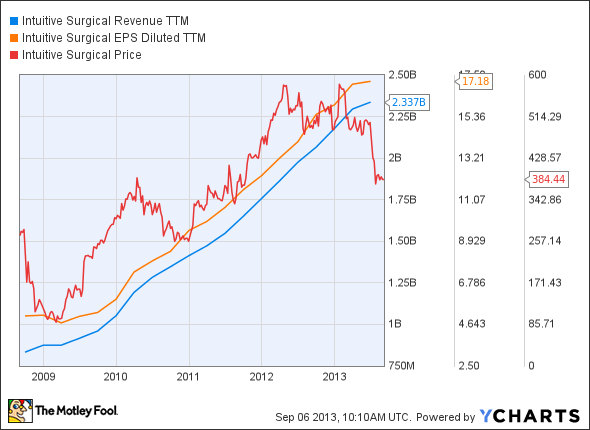 The company started selling the pricey system to upper-class Chinese hospitals in 2007. Yet last quarter, Intuitive Surgical, Inc. (NASDAQ:ISRG) reported that only 27% of its revenue was generated from international markets, while the remainder was still domestic — indicating strong growth opportunities in wealthier markets like China.

Expanding further into China could also help the company offset the negative press coverage that it has been receiving since May, when the Food and Drug Administration launched a probe into five deaths that could have been caused by the da Vinci system. Shares have fallen more than 20% since the announcement.

A robotic alternative to chemotherapy
Another smaller company that could profit from a richer and older Chinese population is Accuray Incorporated (NASDAQ:ARAY), the creator of the CyberKnife and TomoTherapy cancer treatment systems.