Investing in small cap stocks has historically been a way to outperform the market, as small cap companies typically grow faster on average than the blue chips. That outperformance comes with a price, however, as there are occasional periods of higher volatility. The last 12 months is one of those periods, as the Russell 2000 ETF (IWM) has underperformed the larger S&P 500 ETF (SPY) by more than 10 percentage points. Given that the funds we track tend to have a disproportionate amount of their portfolios in smaller cap stocks, they have seen some volatility in their portfolios too. Actually their moves are potentially one of the factors that contributed to this volatility. In this article, we use our extensive database of hedge fund holdings to find out what the smart money thinks of General Dynamics Corporation (NYSE:GD).

Hedge fund interest in General Dynamics Corporation (NYSE:GD) shares was flat at the end of last quarter. This is usually a negative indicator. The level and the change in hedge fund popularity aren’t the only variables you need to analyze to decipher hedge funds’ perspectives. A stock may witness a boost in popularity but it may still be less popular than similarly priced stocks. That’s why at the end of this article we will examine companies such as HDFC Bank Limited (NYSE:HDB), Uber Technologies, Inc. (NYSE:UBER), and Intercontinental Exchange Inc (NYSE:ICE) to gather more data points. Our calculations also showed that GD isn’t among the 30 most popular stocks among hedge funds.

If you’d ask most shareholders, hedge funds are seen as slow, old investment vehicles of yesteryear. While there are over 8000 funds in operation today, Our experts choose to focus on the elite of this group, around 750 funds. These hedge fund managers command the majority of the smart money’s total capital, and by following their inimitable equity investments, Insider Monkey has formulated a number of investment strategies that have historically outrun the S&P 500 index. Insider Monkey’s flagship short hedge fund strategy outpaced the S&P 500 short ETFs by around 20 percentage points annually since its inception in May 2014. Our portfolio of short stocks lost 27.8% since February 2017 (through November 21st) even though the market was up more than 39% during the same period. We just shared a list of 7 short targets in our latest quarterly update .

Unlike the largest US hedge funds that are convinced Dow will soar past 40,000 or the world’s most bearish hedge fund that’s more convinced than ever that a crash is coming, our long-short investment strategy doesn’t rely on bull or bear markets to deliver double digit returns. We only rely on the best performing hedge funds‘ buy/sell signals. Let’s check out the latest hedge fund action regarding General Dynamics Corporation (NYSE:GD).

At Q3’s end, a total of 40 of the hedge funds tracked by Insider Monkey held long positions in this stock, a change of 0% from the second quarter of 2019. On the other hand, there were a total of 35 hedge funds with a bullish position in GD a year ago. With hedge funds’ positions undergoing their usual ebb and flow, there exists an “upper tier” of notable hedge fund managers who were boosting their stakes substantially (or already accumulated large positions). 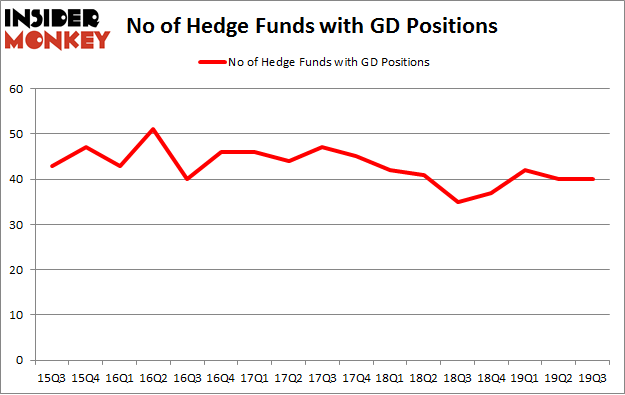 The largest stake in General Dynamics Corporation (NYSE:GD) was held by Longview Asset Management, which reported holding $6011.5 million worth of stock at the end of September. It was followed by Farallon Capital with a $181.2 million position. Other investors bullish on the company included Adage Capital Management, Millennium Management, and AQR Capital Management. In terms of the portfolio weights assigned to each position Longview Asset Management allocated the biggest weight to General Dynamics Corporation (NYSE:GD), around 94.01% of its portfolio. Impala Asset Management is also relatively very bullish on the stock, setting aside 5.82 percent of its 13F equity portfolio to GD.

Since General Dynamics Corporation (NYSE:GD) has experienced falling interest from hedge fund managers, it’s safe to say that there exists a select few fund managers that decided to sell off their full holdings last quarter. Interestingly, Panayotis Takis Sparaggis’s Alkeon Capital Management dropped the biggest stake of all the hedgies followed by Insider Monkey, worth close to $53.1 million in stock, and Renaissance Technologies was right behind this move, as the fund dropped about $48.6 million worth. These bearish behaviors are intriguing to say the least, as total hedge fund interest stayed the same (this is a bearish signal in our experience).

As you can see these stocks had an average of 42.25 hedge funds with bullish positions and the average amount invested in these stocks was $2406 million. That figure was $7034 million in GD’s case. Uber Technologies, Inc. (NYSE:UBER) is the most popular stock in this table. On the other hand HDFC Bank Limited (NYSE:HDB) is the least popular one with only 36 bullish hedge fund positions. General Dynamics Corporation (NYSE:GD) is not the least popular stock in this group but hedge fund interest is still below average. This is a slightly negative signal and we’d rather spend our time researching stocks that hedge funds are piling on. Our calculations showed that top 20 most popular stocks among hedge funds returned 34.7% in 2019 through November 22nd and outperformed the S&P 500 ETF (SPY) by 8.5 percentage points. Unfortunately GD wasn’t nearly as popular as these 20 stocks (hedge fund sentiment was quite bearish); GD investors were disappointed as the stock returned 0.7% during the fourth quarter (through 11/22) and underperformed the market. If you are interested in investing in large cap stocks with huge upside potential, you should check out the top 20 most popular stocks among hedge funds as 70 percent of these stocks already outperformed the market in Q4.