Hedge funds are known to underperform the bull markets but that’s not because they are bad at investing. Truth be told, most hedge fund managers and other smaller players within this industry are very smart and skilled investors. Of course, they may also make wrong bets in some instances, but no one knows what the future holds and how market participants will react to the bountiful news that floods in each day. Hedge funds underperform because they are hedged. The Standard and Poor’s 500 Index returned approximately 20% in the first 9 months of this year through September 30th (including dividend payments). Conversely, hedge funds’ top 20 large-cap stock picks generated a return of 24% during the same 9-month period. An average long/short hedge fund returned only a fraction of this due to the hedges they implement and the large fees they charge. Our research covering the last 18 years indicates that investors can outperform the market by imitating hedge funds’ consensus stock picks rather than directly investing in hedge funds. That’s why we believe it isn’t a waste of time to check out hedge fund sentiment before you invest in a stock like Fang Holdings Limited (NYSE:SFUN).

Fang Holdings Limited (NYSE:SFUN) investors should be aware of a decrease in hedge fund sentiment of late. SFUN was in 6 hedge funds’ portfolios at the end of June. There were 8 hedge funds in our database with SFUN holdings at the end of the previous quarter. Our calculations also showed that SFUN isn’t among the 30 most popular stocks among hedge funds (see the video below).

What does smart money think about Fang Holdings Limited (NYSE:SFUN)?

At the end of the second quarter, a total of 6 of the hedge funds tracked by Insider Monkey held long positions in this stock, a change of -25% from the previous quarter. The graph below displays the number of hedge funds with bullish position in SFUN over the last 16 quarters. With hedge funds’ sentiment swirling, there exists a few notable hedge fund managers who were upping their stakes significantly (or already accumulated large positions). 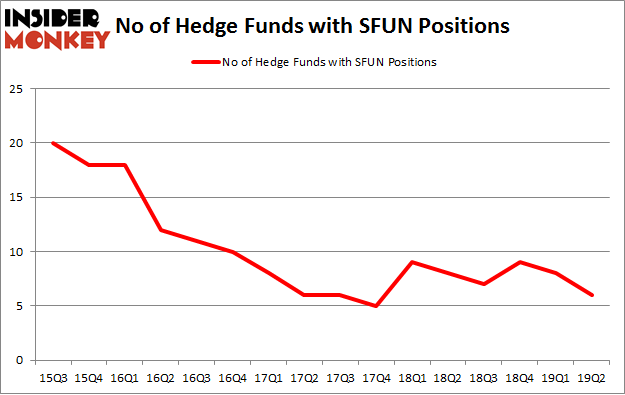 Among these funds, D E Shaw held the most valuable stake in Fang Holdings Limited (NYSE:SFUN), which was worth $0.3 million at the end of the second quarter. On the second spot was Diametric Capital which amassed $0.1 million worth of shares. Moreover, Segantii Capital, Bridgewater Associates, and Two Sigma Advisors were also bullish on Fang Holdings Limited (NYSE:SFUN), allocating a large percentage of their portfolios to this stock.

Judging by the fact that Fang Holdings Limited (NYSE:SFUN) has faced a decline in interest from the smart money, logic holds that there was a specific group of funds who sold off their positions entirely by the end of the second quarter. Interestingly, Israel Englander’s Millennium Management sold off the largest investment of all the hedgies followed by Insider Monkey, comprising about $0.4 million in stock. Warren Lammert’s fund, Granite Point Capital, also dropped its stock, about $0.2 million worth. These moves are intriguing to say the least, as total hedge fund interest dropped by 2 funds by the end of the second quarter.

As you can see these stocks had an average of 9 hedge funds with bullish positions and the average amount invested in these stocks was $47 million. That figure was $0 million in SFUN’s case. L.B. Foster Company (NASDAQ:FSTR) is the most popular stock in this table. On the other hand TuanChe Limited (NASDAQ:TC) is the least popular one with only 2 bullish hedge fund positions. Fang Holdings Limited (NYSE:SFUN) is not the least popular stock in this group but hedge fund interest is still below average. This is a slightly negative signal and we’d rather spend our time researching stocks that hedge funds are piling on. Our calculations showed that top 20 most popular stocks among hedge funds returned 24.4% in 2019 through September 30th and outperformed the S&P 500 ETF (SPY) by 4 percentage points. Unfortunately SFUN wasn’t nearly as popular as these 20 stocks (hedge fund sentiment was quite bearish); SFUN investors were disappointed as the stock returned -28.4% during the third quarter and underperformed the market. If you are interested in investing in large cap stocks with huge upside potential, you should check out the top 20 most popular stocks among hedge funds as many of these stocks already outperformed the market so far in 2019.

Is Donegal Group Inc (DGICA) A Good Stock To Buy?
Monthly Newsletter Strategy
Download a free copy of our newsletter and see the details inside!
Hedge Fund Resource Center
Related News
Here is What Hedge Funds Think About Fang Holdings Limited (SFUN) What Is Going On In The Financial Markets Today? Hedge Funds Are Dumping Fang Holdings Ltd (SFUN) A Look at Five Stocks on the Move on Thursday Here’s Why Eleven Bio, SouFun, Glaukos, Match Group, and Triumph Group Are Surging Today 13G Filing: Billionaire Daniel Och Slashes Position in Soufun Holdings Ltd (SFUN) Why Are These Stocks Deep In the Red Today? 11 Largest Auto Insurance Companies In The US In 2019 10 Poorest Cities in America in 2019 8 Lowest Tar and Nicotine Cigarette Brands in 2019
Billionaire Hedge Funds