The market has been volatile in the last few months as the Federal Reserve continued its rate cuts and uncertainty looms over trade negotiations with China. Small cap stocks have been hit hard as a result, as the Russell 2000 ETF (IWM) has underperformed the larger S&P 500 ETF (SPY) by more than 10 percentage points over the last 12 months. SEC filings and hedge fund investor letters indicate that the smart money seems to be paring back their overall long exposure since summer months, though some funds increased their exposure dramatically at the end of Q2 and the beginning of Q3. In this article, we analyze what the smart money thinks of Enova International Inc (NYSE:ENVA) and find out how it is affected by hedge funds’ moves.

Enova International Inc (NYSE:ENVA) shares haven’t seen a lot of action during the second quarter. Overall, hedge fund sentiment was unchanged. The stock was in 20 hedge funds’ portfolios at the end of the second quarter of 2019. The level and the change in hedge fund popularity aren’t the only variables you need to analyze to decipher hedge funds’ perspectives. A stock may witness a boost in popularity but it may still be less popular than similarly priced stocks. That’s why at the end of this article we will examine companies such as Monarch Casino & Resort, Inc. (NASDAQ:MCRI), EMC Insurance Group Inc. (NASDAQ:EMCI), and Carolina Financial Corporation (NASDAQ:CARO) to gather more data points. Our calculations also showed that ENVA isn’t among the 30 most popular stocks among hedge funds (see the video below).

According to most investors, hedge funds are viewed as slow, old investment tools of yesteryear. While there are greater than 8000 funds in operation today, Our experts choose to focus on the top tier of this group, approximately 750 funds. It is estimated that this group of investors watch over the lion’s share of all hedge funds’ total asset base, and by keeping track of their inimitable stock picks, Insider Monkey has uncovered various investment strategies that have historically beaten the market. Insider Monkey’s flagship hedge fund strategy surpassed the S&P 500 index by around 5 percentage points per annum since its inception in May 2014. We were able to generate large returns even by identifying short candidates. Our portfolio of short stocks lost 25.7% since February 2017 (through September 30th) even though the market was up more than 33% during the same period. We just shared a list of 10 short targets in our latest quarterly update .

n addition to following the biggest hedge funds for investment ideas, we also share stock pitches from conferences, investor letters and other sources  like this one where the fund manager is talking about two under the radar 1000% return potential stocks: first one in internet infrastructure and the second in the heart of advertising market. We use hedge fund buy/sell signals to determine whether to conduct in-depth analysis of these stock ideas which take days. We’re going to take a look at the fresh hedge fund action encompassing Enova International Inc (NYSE:ENVA).

What does smart money think about Enova International Inc (NYSE:ENVA)?

At the end of the second quarter, a total of 20 of the hedge funds tracked by Insider Monkey held long positions in this stock, a change of 0% from the previous quarter. The graph below displays the number of hedge funds with bullish position in ENVA over the last 16 quarters. With the smart money’s positions undergoing their usual ebb and flow, there exists an “upper tier” of noteworthy hedge fund managers who were increasing their holdings significantly (or already accumulated large positions). 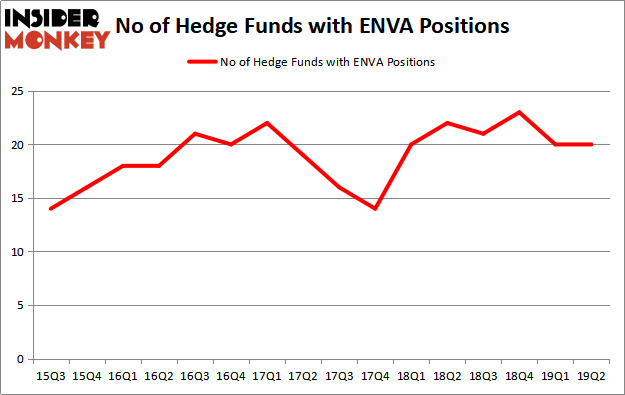 The largest stake in Enova International Inc (NYSE:ENVA) was held by Renaissance Technologies, which reported holding $58.9 million worth of stock at the end of March. It was followed by Prescott Group Capital Management with a $19 million position. Other investors bullish on the company included 683 Capital Partners, Empyrean Capital Partners, and Osterweis Capital Management.

Judging by the fact that Enova International Inc (NYSE:ENVA) has witnessed bearish sentiment from the entirety of the hedge funds we track, it’s easy to see that there exists a select few hedge funds who were dropping their entire stakes heading into Q3. At the top of the heap, Andrew Feldstein and Stephen Siderow’s Blue Mountain Capital sold off the largest stake of the 750 funds tracked by Insider Monkey, worth close to $0.5 million in stock, and Noam Gottesman’s GLG Partners was right behind this move, as the fund sold off about $0.3 million worth. These transactions are important to note, as aggregate hedge fund interest stayed the same (this is a bearish signal in our experience).